For in the true nature of things, if we rightly consider, every green tree is far more glorious than if it were made of gold and silver.

On 1 December, Trees of Dharamsala, a new photographic art exhibition opened at café and art-gallery, The Other Space, in Dharamsala, India.  The photographer is Tibetan Buddhist monk, Nicholas Vreeland (monastic name, Thubten Lhundup) who became a monk in 1985 and is now the abbot of Rato Dratsang, a Tibetan Buddhist monastery under the patronage of His Holiness the 14th Dalai Lama. Vreeland is also Director of The Tibet Center, the oldest Tibetan Buddhist Center in New York City and holds a Geshe degree, the equivalent of a PhD. He is generally based in South India at his monastery, following his main teacher, Rato Khyongla Rinpoche, founder of The Tibet Center, whom he met in 1977.

Thirteen images make up the exhibition Trees of Dharamsala, with three sections: Tree Portraits, Trees, and Barnet. The visually stunning monochrome images of trees, taken around Dharamsala, resemble intricate line drawings and remind us of their unique yet complex aesthetic beauty, longevity, and importance to nature, wildlife, and humans. Close-ups of ancient barks, like fingerprints, offer evidence of their lives and growth.

Vreeland explained to people on the opening night of the exhibition: “I am an amateur, not a professional photographer like some of you here. I take pictures out of love.”

Vreeland kindly granted me an interview to talk about the new exhibition and when I told him that I liked what he said, he explained that the word “amateur” itself comes from “amare,” “to love”. The “love” of the art and the subject certainly comes through in these works.

I asked Vreeland why he chose trees as a topic and he joked that trees were silent, open, and never objected to being photographed, but also that it took time and patience to photograph a tree. When asked about his artistic influences, he said that he was more inspired by the French photographer Eugene Atget (1857–1927) over Alfred Stieglitz (1864–1946), whom I mentioned as a possible influence. Vreeland felt that Atget endeavored to “show” the subject more, whereas Stieglitz’s aim was to express himself more through his work. For me, there are definite parallels to be drawn between the aesthetic and purpose of Vreeland’s Trees exhibition and Stieglitz’s pioneering photographs of clouds, Equivalents. The photos are stark and naked and Vreeland told me there was no Photoshop editing of the photographs—they were developed merely using the digital version of “old-school” techniques of a dark room.

When asked about the connection of spirituality and nature, Vreeland explained how trees are extremely valuable from a Buddhist perspective too:

In Buddhism, trees are not viewed as conscious sentient beings like animals and humans and so on. However, they are sentient in terms of their being living organisms with which the planet, animals and we humans are completely interdependent.

The Other Space is also the perfect backdrop for these exquisite photographic works. Ten minutes’ walk from the Dalai Lama’s temple, opposite and surrounding it are forests and mountains, on a road that leads up to the circumambulation route around the temple itself. The café has some of the best coffees, pastries, and sunset and moon views in the small town. They often host art exhibitions and people can hire work-spaces there.

As I wrote about in Aesthetic Experience (Routledge 2007), the sublimity and “divinity” of trees and nature has inspired writers, poets, and philosophers for centuries across all cultures and races. The 20th century black human rights activist, Martin Luther King Jr., saw the value of trees as being worth more than gold or silver.  In Europe and North America, philosophers such as Immanuel Kant, William James, and Ralph Waldo Emerson, among many others, have written stunning analyses and odes to nature, not only for its aesthetic pleasure but for its incredible purpose, language, power, and majesty—in other words, nature’s sublimity.

In Emerson’s famous 1836 essay, Nature, he divides nature into four usages: Commodity, Beauty, Language, and Discipline. Emerson asserts that humans do not fully accept nature’s beauty and that people are distracted by the demands of the world, whereas nature gives but humans fail to reciprocate.* This is similar to the artist, Georgia O’Keefe’s assertion that, “Nobody sees a flower really; it is so small. We haven’t time, and to see takes time—like to have a friend takes time.” Vreeland’s photos certainly lead us to “see” trees and pay attention to their beauty and value.

Aside from aesthetic value, the importance of trees for breathing and life on Earth are often taken for granted. This is why the destruction and cutting down of the Amazon rainforest—the lungs of the planet—purely for livestock reared and killed for meat, is an ongoing tragedy which causes huge damage to the air, planet, animals, and climate change. Trees are a prime source of oxygen and habitats for many forms of wildlife, in particular birds.

In India, forests—like rivers—are vital to the country’s livelihood. There are heroic stories of Indians planting whole forests of trees, such as India’s “Forest Man”:  Jadav “Molai” Payeng, who single-handedly planted an entire forest in Majuli island in Assam after scientists said the island could die after a catastrophic drought.** In 1979, the chemist James Lovelock, in his influential and wise book Gaia: A Look at New Life on Earth (Oxford University Press) put forward the Gaia theory, Gaia paradigm, or the Gaia principle, which proposes that living organisms interact with their inorganic surroundings on Earth to form a synergistic and self-regulating, complex system that helps to maintain and perpetuate the conditions for life on the planet. The hypothesis was formulated by Lovelock and co-developed by the microbiologist Lynn Margulis. Lovelock named the idea after Gaia, the primordial goddess who personified the Earth in Greek mythology.

The idea of trees not just being essential for the planet but also for human well-being has also been documented in the “tree-hugging” movement that developed in the 1970s. This activity is not only seen as good for health but in the case of the “tree-hugging” the Chipko activists of 1970s and ‘80s India was part of a strategy used to save forests, by calling attention to the deep interdependence between humans and the natural world.***

In these challenging times, we have all been made more aware than ever of how “mother” nature is more powerful than all of us. We would do well to respect that and make sure we live in harmony with it and the millions of other species on this planet. If we do not listen to the clear messages nature is giving us, and continue to use it as an external object purely for human pleasures and wants, then at some point, nature will “turn on us” and stop such destruction, even if that means wiping out the human race.   The Buddhist view of reducing personal desires and interdependence is especially relevant here.

I chose Rudyard Kipling’s “The Way through the Woods” poem to accompany this piece, not only because the Nobel Literature prize winner spent the first years of his life in India, remembering it in later years as almost a paradise, but also because the poem speaks of that power of nature to render anew its roads where humans trod—or fear to tread—of a magical, mystical world of forests, bark, leaves, and bird song.**** I like to pick music to accompany the pieces I write, and for this short article, I picked “I Talk to the Trees” by Chet Baker and “A Day in the Life of a Tree” by the Beach Boys.

The limited-edition photographs signed by Vreeland are for sale (and can be shipped internationally. All proceeds from the exhibition go to Rato Dratsang, India to help feed, clothe and house the monastics there.  For enquiries contact here.

**** “My first impression [of India]” Kipling wrote in his posthumously published autobiography Something of Myself for My Friends Known and Unknown (Macmillan of London 1937), “is of daybreak, light and colour and golden and purple fruits at the level of my shoulder.”   Kipling also wrote one of the most popular children’s books about a boy who grew up with animals in a jungle, The Jungle Book (Macmillan 1894). Adele Tomlin is a British writer, poet, scholar, and translator. She is the co-editor of a philosophy collection on Aesthetic Experience (Routledge 2007) and author/translator of two books on Buddhist philosophy and practice: Taranatha’s Commentary on the Heart Sutra (LTWA 2017) and The Chariot that Transports to the Four Kayas (LTWA 2019). She has been studying Tibetan language and Buddhist philosophy since 2007 in Europe, India, and Nepal. Her work and research can be found on the first female-founded Dharma translations website: www.dakinitranslations.com. 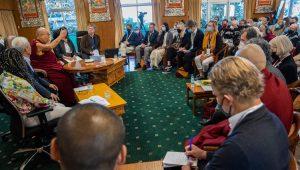 Very interesting article. Wide prospective and very good analyse of the natural enviroment. Plus some good connection to Buddism. Thank you