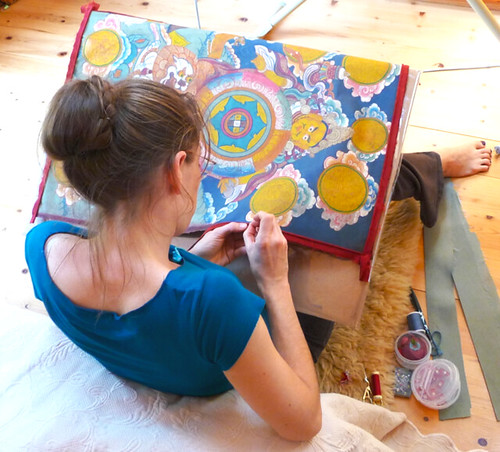 The seamstress in her studio. © 2015 Bodhi Montgomery

A long-time Vajrayana Buddhist practitioner, Helene Rein moves seamlessly between contemplation and immersion in the natural environment of tactile crafts. As a child growing up in Norway, Helene created homemade gifts, such as embroidery, cross-stitched pillows, lavender sachets, and wall-hangings. Her mother embroidered all the flowers and designs on her bunad, a traditional Norwegian costume. She attended the Waldorf High School in Stavanger which helped deepen her experience of making things by hand. Helene’s Buddhist meditation teacher Lama Padma Drimed Norbu, also likes making things. Helene says he exemplifies making practical items that are pleasing and functional as a practice, and they both enjoy arranging beautiful objects in unusual ways, from small offerings to large retreat spaces.

Helene spent five years in retreat in Northern California, where she awakened to the process of crafting, not only the outcome. She loves the unfolding engagement of the relationship with the materials, and having her hands involved from the first conception of an idea through to the finished piece.

Buddhistdoor Global: How did you begin working with thangkas?

Helene Rein: I love the Buddhist deities, and one of my favorite things to do is to sew thangka borders as a way to honor them, to accent the deities more than overpowering them with heavy brocade patterns. The first one I did was when Lama Drimed, asked me to paint my practice yidam, so I did that and framed it. While I was in retreat, my lama asked me to frame other thangkas for various practitioners.

The Tibetan brocades that are traditionally used are hard to find and very expensive. Chinese brocades are a little easier on the eye. There is a man in Los Angeles who I have worked with for about 15 years. He took over the shop—the first Chinese fabric import store in LA—from his parents many years ago. I’ve also used sari fabric and Japanese brocade. I have to reinforce the sari and lighter fabrics with interfacing materials. I framed a thangka in red for Susan Harper [a retreat leader] and sewed it onto a sari, as a display background.

The sewing requires more mechanical skill and must be more precise. The process can’t be rushed or begun at any old time, rather it has a timing of its own. Sewing works on me at its own pace, from the beginning stages as I choose the fabrics, through problem-solving, to completion. I think of it as a truly intuitive process which can’t be forced; it’s as if the creative stars have to align or something! I want the thangkas to be really beautiful, to enhance the inspiration of whoever receives them. People say personalizing their Dharma items makes them more special, making them feel more connected when using them. I find working with my hands brings a quality of life that I really crave. I could use faster techniques, but the experience and result wouldn’t be there if I didn’t do it all carefully by hand. BDG: Tell us about your enchanting text covers.

HR: I love that we wrap our sacred texts respectfully and I like to have a different color for each one, so that I can find them very easily. My design has no string-tie, so when stacked they don’t bulge out—instead they fold nicely so the brocade is level. I find unusual fabrics for these and bring them to retreats to share. The sari shops in Berkeley are an amazing draw for me, a place to find treasures. I also make formats for Western books, or Tibetan pecha, and even for private collections, such as The Collected Works of Chogyam Trungpa. I vary them, either using a contrasting lining color, or matching depending on the buyer’s personality or spiritual nature. Some people don’t know what they like, and others aren’t highly attuned to color, so in those cases I have a great time picking my own combinations to make for them. I want my handmade products to be an invitation to enjoyment, because it’s wonderful if meditation practice can be a joy! I recently heard American author Brené Brown say that joy is our most feared experience, and to defend ourselves from loss we believe that joy won’t last, thereby cutting ourselves off from meditational opportunity. BDG: Can you tell our readers why you began making traditional flute covers?

HR: Lama Drimed and sangha members play these flutes, the shakuhashi (Japanese), the bansuri (Indian), etc. I noticed the soulful atmosphere when Lama Drimed plays the flute at the right time of a teaching session. He invites people into a session, or dissolves a verbal, interactive session with the flute, sometimes accompanied by the tambura, providing a supportive musical drone underneath. I’ve been able to make a number of these flute covers, as well as kangling (ritual horn) covers. It’s a major trial-and-error process because of the odd shapes. They must all be custom fit, since flutes and kanglings are such unique shapes, so each individual ritual object is the form for its sewn cover. I’ve been called a fabric engineer! I design the shape for the end, together with Lama Drimed, in a cooperative effort to see both what would work and also be visually pleasing.

BDG: You have also become an accomplished retreat cook. Please tell us more about this.

HR: I started out as an apprentice to Renee [McClain, former head cook at Rigdzin Ling Retreat Center in Junction City, California], learning from her for over four years. I’m proud of our atmosphere as much as the food itself. I kept getting feedback from retreat participants: they would overhear us talking to each other, laughter ringing out from kitchen area, or working in companionable quiet. It became clear to me that the environment is as important an offering as the meal; that we enjoy being together making the offerings. We were fortunate to have similar personalities as cooks: we preferred to be slow and steady (that’s rare for cooks!) taking the freedom to work at our preferred slower pace. This is possible because the retreats last 10–12 days, not year-round. 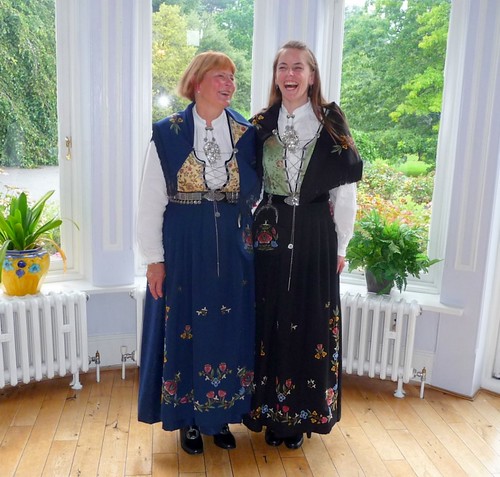 BDG: How have you progressed as a cook, in terms of process and outcome?

HR: It was easier as an apprentice-laborer! But actually, I really like knowing the bigger picture. So, while the learning curve of being head cook was really challenging at first, now that the responsibility has been fully on my shoulders for three retreats, I don’t have to think as much. I can rely on my previous experience and there’s a greater sense of flow. Renee’s food was based on a macrobiotic background, very simple and straightforward. Then I cooked with Cheryl [Buchan], who is the opposite. She loves wild colors and flavors; her culinary expressions can be way over the top! She would put out as many dishes as she could—a real gastronomic smorgasbord. So, I’ve landed somewhere in between these two mentors. I have flavorful dishes and I mix them up with plainer tastes, for example combining plain grilled chicken, grilled sweet potatoes, and collards. The next day I might cook with many condiments, accompaniments and side dishes. It’s akin to building up an elaborate deity visualization and then letting it all just dissolve into “Ahhhhhhhhhh . . .” 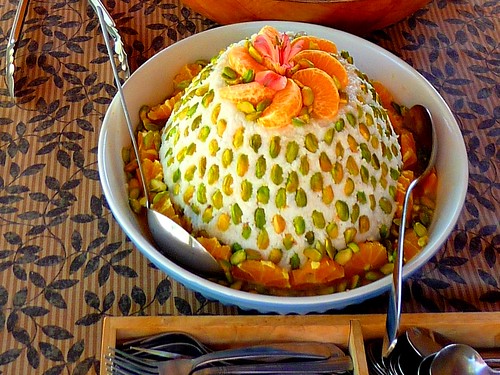 I don’t even know how it happens, I start doing and I forget about myself. It’s a total meditation. I attribute a lot of it to the land itself. At the Ojai Foundation,* the history of practitioners is very strong and the natural quality of the land has been so respected, the spirits of the land are at ease and very present. Chagdud Tulku Rinpoche and many other great masters have left a deep and pervasive impression here. Ceremonial empowerments also change the place, enhancing the meditative field. I feel the increase over time throughout the retreats. I feel more relaxed, I enter into a zone where I just know the timing intuitively, not logically. We become tuned in as a group, with the land and with each other, and can sink into the space of natural knowing. The poet Mary Oliver put it best: “You only have to let the soft animal of your body love what it loves . . .”** And be how it is and do what it does!

Rein also makes lovely malas, and succulent botanical gardens. Every corner of her kitchen, home, garden, and studio are touched by the grace of quality craftsmanship and attention to detail, infused with the power of awareness and conscious love. All of her work is of the highest quality, exquisite, and filled with delight and enjoyment.