One of the most fascinating examples of Buddhist architecture is the stupa, a structure that evolved from a simple burial mound into the large-scale domed structures of the Himalayas and Southeast Asia and the elegant multi-tiered pagodas of East Asia. Both stupas and pagodas are essentially containers for relics of the historical Buddha, Shakyamuni, or other Buddhist teachers or saints, but over the centuries, as the Buddha’s followers spread his teachings throughout Asia, they constructed such monuments in various materials, sizes, and styles, to contain texts and other sacred items as well as relics. These sacred structures have played a variety of roles—spiritual, political, and artistic: as a central focus for Buddhist devotion, as a tool for Buddhist rulers to unite their subjects, and as an architectural expression of belief in the Buddhist teachings.

The earliest stupas (a Sanskrit word meaning “a heap”) were ancient Indian burial mounds that marked the graves of religious or political leaders and reminded the living of their power. After Shakyamuni’s death, these mounds were incorporated into Buddhist practice as containers of his relics and those of later Buddhist teachers. The relics were placed in the center of the mound and a pole was passed through the middle of the structure linking the relics with the stupa’s top, which created an axis mundi symbolically connecting the mundane and the supramundane. In many stupas, the top of the pillar rises up from the dome and is topped by three circular disks known as chattra (Sanskrit for “umbrella” or “parasol”), which represent the Three Jewels (Skt: triratna): the Buddha, Dharma (teachings), and sangha (monastic order). The dome is frequently constructed on a platform, often square, while around the base is a walkway, which may be surrounded by gates. Typically, followers pass through the eastern gate and circumambulate the dome in a clockwise direction, in an act of walking meditation.

One of the most ancient and important stupas is the Great Stupa at Sanchi. Located in north-central India, this stupa is believed to contain relics of the historical Buddha and was originally constructed by the Mauryan emperor Ashoka, who ruled a large part of India in the 3rd century BCE. After a particularly bloody battle, he renounced violence, converted to Buddhism, and attempted to unite his empire under the Buddhist Law. He had stone pillars inscribed with edicts proclaiming the virtues of Buddhism erected throughout his empire as a means of spreading the faith among his subjects. He also opened up eight Buddhist stupas containing relics believed to be from the Buddha and distributed them among the 84,000 stupas that he ordered to be constructed around India, thus providing many focal points of devotion for an expanding population of Buddhist followers. The Great Stupa at Sanchi is one of the few surviving monuments from this endeavor, and is still venerated as a sacred site today. In the following centuries, the stupa was renovated and enlarged, and in the 1st century CE, four stone gates (Skt. torana) were erected around the structure and embellished with ornate Buddhist imagery. On the south gate is an image of devotees praying in front of a stupa—an early artistic testimony to the spiritual power attributed to the structure itself. Similar domed structures were erected later at many other important Buddhist sites in Asia and were influenced by local architectural styles and traditions. In the Himalayan region, one of the most spectacular examples is the Boudhanath Stupa in Kathmandu, Nepal. Built in the middle of the first millennium CE, it is said to enshrine the remains of the Buddha Kashyapa, who preceded Shakyamuni, the Buddha of our age. This massive stupa, which was damaged during the 2015 Nepal earthquakes, is renowned for its whitewashed dome, the gilded structure that rises up from the dome, and the large pairs of eyes that gaze outwards in the four cardinal directions, offering protection.

In Southeast Asia, stupas (here, as in East Asia, often referred to as pagodas) have largely retained their original spherical form, though in Thailand and Myanmar the round section of many of these structures has become more slender and is often covered in gold. The colossal Shwedagon Pagoda in Yangon is the most sacred stupa in Myanmar and is said to house the relics of the four previous Buddhas of our age. The structure features a bulbous, bell-like form built on a stone base and is entirely covered in gold plate and crowned with diamonds and rubies; it is a prime example of the influence of regional artistic styles on the architecture of these sacred structures. 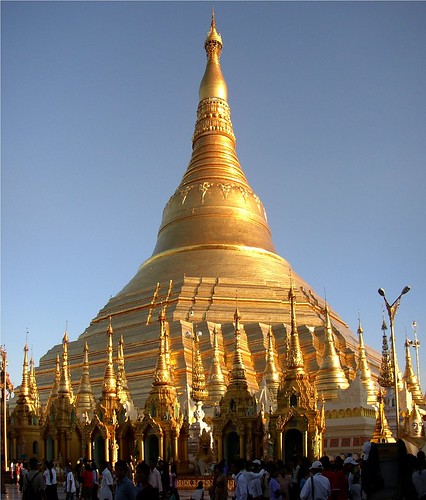 In East Asia, the stupa underwent a fascinating transformation, evolving into the structure we know as the typical pagoda. Largely unrecognizable as stupas, these wood, brick, or stone monuments similarly house relics and have a pole connecting them to the top. While the “umbrella” disks are still present at the very top of the pagoda, in most cases the round section of the original stupa form has disappeared. Around the middle of the first millennium CE, under the influence of Chinese tower and pavilion architecture, the stupa stretched upward and took the form of a multi-storied tower, the levels (typically 3, 5 or 7) echoing the series of small circular “umbrella” disks that crown the traditional form. 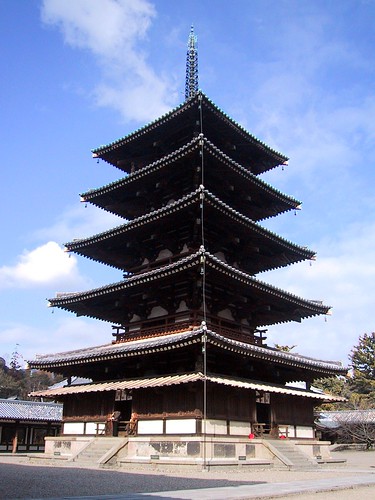 The evolved form is exemplified by the five-storied pagoda at the temple Horyu-ji near Nara in Japan. One of the world’s oldest surviving wooden structures, this 7th century tower is believed to contain a fragment of a bone of the historical Buddha, and was the principal building in the original temple complex. Enshrining Buddhist relics, this and other pagodas throughout East Asia were for centuries the main focus of devotion, with practitioners circumambulating the buildings and the relics inside. Later, the halls containing Buddhist statues became the primary focus for practice, and within most temple complexes, the pagodas became secondary buildings. Nonetheless, they are often the most eye-catching structures on the temple grounds. Today, the elegant pagodas of Horyu-ji and the later Kiyomizu temple in Kyoto, with their layered wood roofs ascending in stages towards the sky, evoke a connection with the spiritual and a reverence for the ancient teachers whose relics are housed within.