My teacher, Sayadaw U Pandita, one of the great contemporary meditation masters of Theravadin Buddhism, died on 16 April. Sayadawgyi,* born on 28 July 1921 in Insein, Myanmar, was 94 years old. Over the last years of his life there was a growing appreciation that he would be leaving this world in the not-too-distant future, so when I heard the news of his passing it was not entirely unexpected. Over the first days, although I felt the loss, there was a sense of unreality, a limbo-like period when the knowledge that he had gone had not really sunk in. It was a few days later that the sadness rose up from deep within and tears came to my eyes. Since then, I have been experiencing the arising of many mental images of times in his presence—a storehouse of memories—and while these do evoke sadness, it is also awe, wonder, joy, fondness, and a loving sense of gratitude that I feel. 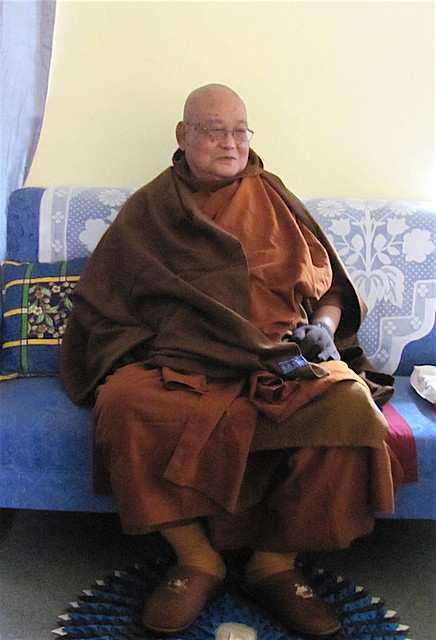 Sayadaw U Pandita in Lumbini

Much has been written about Sayadawgyi’s life—his early entry into monasticism, his impressive achievements in Dhamma studies, and his training in and mastery of the meditative path with the great Mahasi Sayadaw, whom he succeeded in the early 1980s. His Dhamma teachings—his writings and talks—are familiar throughout the Buddhist world. And, right up to the last, he traveled and taught the Dhamma internationally, becoming known not only for his vast knowledge but also for his rigor, fierceness, wisdom, compassion, and commitment in regard to the yogis under his care. I also experienced a warmth and kindness that I sensed as an underground current, often subtle and not always easily felt when in Sayadawgyi’s imposing presence but which, when it rose to the surface, gave solace and ease. This small tribute re-presents what were a few brief moments in Sayadawgyi’s momentous life, but which have been memorable and extraordinarily significant episodes in mine.

I began hearing about Sayadawgyi in the early 1980s, around the time of Mahasi Sayadaw’s death, when he became the senior teacher and successor at Mahasi Yeiktha.** This was a time in Australia, and in other Western countries, when a number of people had returned from Mahasi vipassana practice in Asia and, inspired by their experience, began to organize retreats and teach meditation. Several of these teachers from the United States—Joseph Goldstein, Sharon Salzberg, Alan Clements, and Steven Smith—came to teach in New South Wales, Australia, where I was living. Also, during that same period, Sayadawgyi led his first retreat in the West, in the US. Then, in late 1985, he came to Australia to teach a four-week retreat.

Being on the edge of the organizing group, I had an opportunity to meet Sayadawgyi when he arrived in Australia and to attend the first two weeks of the retreat. There was building excitement in anticipation of the arrival of such a senior teacher. Sayadaw flew into Sydney, accompanied by his kappiya (attendant) Khin Maung Htay and another senior monk from Nepal, Venerable Nyanaponika, who was to act as translator. Although Sayadawgyi could understand and speak English reasonably well, the use of a translator ensured that his teachings would be more easily understood and as accessible as possible, which was just one example of his meticulous attention to detail. 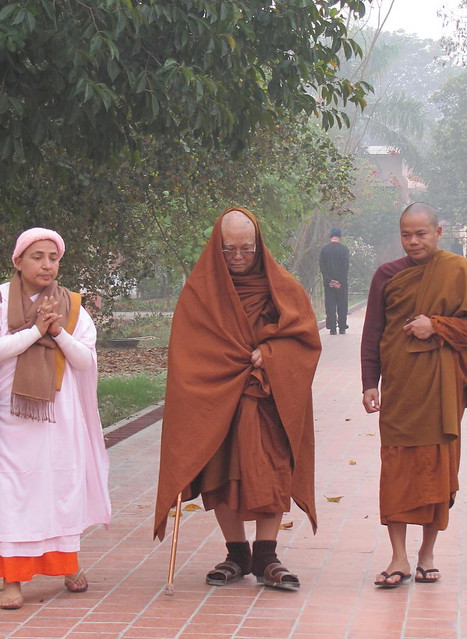 I felt that nervous excitement and was very much looking forward to meeting Sayadaw U Pandita for the first time. However, my lack of familiarity with being in the presence of Buddhist monks, my ignorance of the appropriate protocol, and the incredible aura that emanated from Sayadaw and the other senior monk unsettled me. They were a formidable pair, and my mind just seemed to go blank. I remember sitting in slightly uneasy silence until finally I tried to get some thoughts together and ask a question, which felt very awkward and in stark contrast to the composed demeanor of Sayadawgyi and Ven. Nyanaponika.

With the retreat, which was held at Kerever Park, a center in Burradoo in the Southern Tablelands of NSW, about to begin, I said final goodbyes to my two young daughters Vashti, aged 7, and Pixy, 18 months, settled into my room, and set up my sitting cushion in the meditation hall. In my youthful enthusiasm, I placed myself at the front of the room facing Sayadaw U Pandita’s seat. Little did I know that this was to be such a transformative experience, the beginning of a lifetime commitment to the Dhamma. Sayadawgyi’s strong presence and his evening talks encouraged and challenged us to make warrior-like effort. Interviews with him were often nerve-wracking, not so much because of anything he did, but more due to his non-reactivity, impartiality, and minimal responsiveness to whatever I reported. I was thrown back on myself, and would usually come out of the interview wondering what on earth I was doing. Yet most of the time, when I next sat down on my cushion, the practice would just seem to unfold. My trust began to grow, both in the Dhamma and in Sayadaw as a teacher. By the end of the retreat, I felt immense respect, appreciation, and gratitude to Sayadawgyi for his wise guidance and compassionate heart; I felt I had become a part of his Dhamma family.

After the retreat, Sayadawgyi met my daughters and was interested to watch and talk with them and the children of other people around him. He took a particular interest in my 18-month-old, Pixy, who was active, curious, and pretty fearless, and his interest in her continued as she grew. In almost every encounter I had with Sayadawgyi, the first thing he would ask was how she was. And many years later when, as a young woman in her early 20s, she accompanied me to the Panditarama International Vipassana Meditation Centre in Lumbini, he offered her kindness and treats from his table to help lift her spirits during a particularly difficult time in her life. His interest in children and his conviction in the great benefits of the Dhamma led to him presiding over a young persons’ retreat on another of his visits to Australia. As well as my two girls, this time my son, Adam, who lived interstate with his father, was with me, and the three of them attended this retreat. I was so happy that they all were able to be there and meet and learn from this wonderful teacher. Now that Sayadawgyi has gone I feel doubly glad that they had this opportunity. Sayadaw U Pandita and Ven. Nyanaponika on their first trip to Australia, with the author's daughter Vashti

After that first retreat in Australia I traveled to Myanmar, Sayadawgyi’s home country, to practice with him further, the first time at Mahasi Yeiktha and then later, when he moved, at Hse Main Gon. Those times meditating in Myanmar, a country immersed in the Buddha Dhamma, and seeing Sayadawgyi in his own environment, were amazing, overwhelming, eye-opening, powerful—and challenging. There was an atmosphere of devotion and dedication to the Buddha Dhamma in Myanmar, seen in the innumerable stupas and devotional objects, and in the generous support of the people and their reverence towards the Sangha, which, at his meditation center, was directed most earnestly towards Sayadawgyi. In turn, he gave generously and seemingly tirelessly to a great many people. With wholehearted dedication to the Dhamma, he shared his vast knowledge and experience during formal retreats, supported lay people in their day-to-day concerns, and provided hospitality and practical care to yogis. He would walk around in the dining room checking on us, and one time stopped behind me and asked if the food suited me. It was somewhat disconcerting to eat under Sayadawgyi’s watchful eye and even more so to be questioned by him, but I also felt pleasure in his care and interest.

I have fond memories of sitting in his small residence within the grounds of Mahasi Yeiktha; a small group of us foreign yogis would gather each evening after a long day of practice to hear his inspiring words. It was such an intimate gathering, a special time, which would change as his reputation spread. The next time I was in Myanmar, the talks were held on the top floor of a huge hall and attended by hundreds of yogis. Followed by a retinue of attendant monks, Sayadawgyi walked through the center of the room, took his seat on his raised throne, and gave talks of such profundity that I felt transported to a higher, finer place.

After those times in Myanmar, I began to go to Nepal for retreats at the Panditarama International Vipassana Meditation Centre in Lumbini. Sayadawgyi would teach a retreat there every year, and a large contingent of his Nepalese devotees would travel down from Kathmandu to sit with him. This was always a hectic time, the usually quiet center becoming a hive of activity. The last time I saw Sayadawgyi was about four-and-a-half years ago, when I served at the Lumbini center as a volunteer. This role enabled me to observe what he did in a way that was not really possible as a yogi. Although by then he was already around 90, he seemed indefatigable. He gave interviews and talks to the yogis every day as well as several public talks, and met and talked with various individuals. I was able to have one short private meeting with him before he left, in which I asked his advice about an aspect of my personal life. His final summation was that I should use my own wisdom. At the end of the retreat I went along with the group to see him off at the local airport, and the last glimpse I had of him was boarding a Buddha Air flight back to Kathmandu. 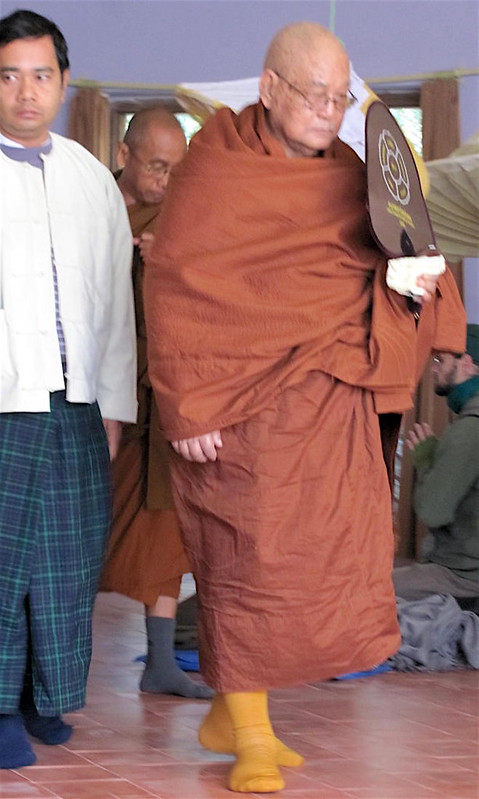 Sayadaw U Pandita touched the lives of so many. A shining light in the world, he served as an inspiration for our meditation practice, as a fierce yet encouraging teacher, and as an example of a Dhamma life well lived. His legacy will continue in the hearts and minds of those of us who had the great good fortune to know him—but he will be greatly missed.

* Sayadaw literally means “royal teacher” and is an honorific used for a senior monk or abbot. “Sayadawgyi” is a term of reverence (gyi pronounced as “gee”).