Throughout the history of Chinese Buddhism, monasteries have played an instrumental role in spreading Buddhist Dharma. A monastery not only provides learning and sadhana (practice) facilities for the sangha, but also serves as a sacred space for public worship, as Buddhist devotees take refuge in the Three Jewels of the Buddha, the Dharma, and the Sangha. That is why the Buddhist community has invested so many resources in renovating and rebuilding monasteries. This phenomenon is particularly common in China in the past two decades, since the country has experienced dramatic economic growth and resurging popularity in Buddhism.

Since 1997, Venerable Miaojiang (妙江), director of the Buddhist Association of Shanxi Province and deputy director of the Buddhist Association of China, has been working on the reconstruction of the Great Sage Monastery of Bamboo Grove (大聖竹林寺) on Mount Wutai. As the Bodhimanda (seat of awakening) of Bodhisattva Manjusri, Mount Wutai has been a major pilgrimage destination for Buddhists from the Chinese, Tibetan, and Mongolian traditions for more than a thousand years. There are about 50 functioning Buddhist monasteries and many more sacred sites on Mount Wutai. While many of monasteries and sites have been admired for their ancient architecture and art, or historical association with the imperial court, the Great Sage Monastery of Bamboo Grove had almost faded into oblivion when Venerable Miaojiang first went there in 1988. As a young monastic, he was appointed by the Buddhist Association of Shanxi Province to manage the monastery. However, at his arrival, he only found a white pagoda from the Ming dynasty, a few rundown buildings, and two residing monks. Nevertheless, he stayed. The white pagoda at the Great Sage Monastery of Bamboo Grove. Photographed by Fu Yiqun

Venerable Miaojiang was born in 1952 to Buddhist parents in a village near Datong city in Shanxi Province. Despite the unfavorable socio-political environment for Buddhism, he grew up in local monasteries and, and in 1968, he officially joined the sangha. Nowadays, he has become one of the most influential Buddhist leaders in China, and also serves as the abbot of the Bishan (碧山, “Green Hill”) Monastery—the most renowned shifang conglin (十方叢林, public monastery) on Mount Wutai. Since the beginning of the 20th century, the monastery has accommodated and even financially supported numerous sangha members who have visited Mount Wutai.

While Venerable Miaojiang has stayed at and visited many famous monasteries throughout his career, he feels most joy at the Great Sage Monastery of Bamboo Grove. For him and the sangha community there, it has a long and significant tradition that needs to be revived, regardless of the recent obscurity of the monastery. In fact, the monastery was founded in 771 by Fazhao, the fourth patriarch of the Pure Land School. According to the Song Biographies of Eminent Monks,* Fazhao had had visions of Bodhisattva Manjusri and a paradisal monastery named the “Great Sage Monastery of Bamboo Grove,” for years. Therefore, he set out on a pilgrimage with his disciples to Mount Wutai, searching for such a place. Eventually he saw the manifestation of Manjusri and Samantabhadra teaching the Dharma, and, on that spot, he constructed a celestial monastery named after the “Great Sage Monastery of Bamboo Grove” from his visions. By 838—when Ennin (圓仁), the Japanese Buddhist master of Tiendai School, came to Mount Wutai—the monastery had developed into an international center for Buddhist studies, composed of six complexes.** One of the complexes, the Complex of Vinaya, operated one of the two nationally recognized sima (戒壇, ordination shrine).

Over the past ten years, to restore its former glory, Venerable Miaojiang, together with his disciples and local workers, has gradually transformed the remains of the Great Sage Monastery of Bamboo Grove into a magnificent architectural compound. Built on the slope of a mountain, the monastery covers an area of 170 mu (about 28 acres). The construction project is supported by the local community. Back in 1997, all the villagers signed an agreement to grant the venerable as much land as required for rebuilding the monastery. Such an act was partly out of religious piety, and partly out of gratitude. When the village school was heavily damaged by rains, the head of the village turned to Venerable Miaojiang for help. Venerable Miaojiang made a donation that covered the costs not only of the new buildings but also of all the desks and chairs for the students. When it comes to the Great Sage Monastery of Bamboo Grove, however, Venerable Miaojiang never raised funding for its reconstruction. He simply resumed the project whenever there were extra resources. 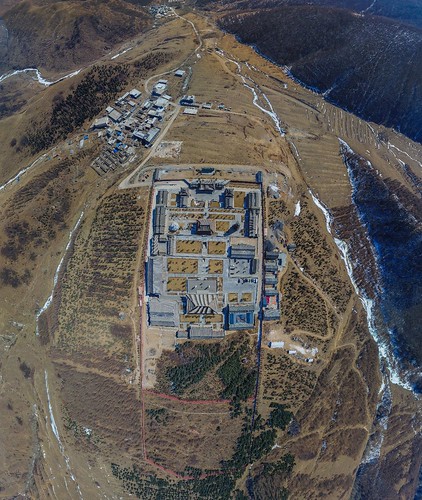 The layout of the monastery is modeled on monastic architecture of the Ming and Qing dynasties, but its design is infused with creativity—there are splendid sculptures made of various materials, tilework of Amitabha Buddha guiding sentient beings to the Western Paradise, stone carvings of Fazhao’s visions, a replica of Mount Wutai depictions at Dunhuang, and hidden pathways leading to another architectural structure, all arranged in harmony. An accomplished calligrapher and painter himself, Venerable Miaojiang told me, “all forms of Buddhist arts, be it painting, sculpture, writing, music, or chanting, are expressions of Buddhist teachings. Therefore, regardless of our social and educational backgrounds, anyone can find a form to which they can relate”.

When I asked Venerable Miaojiang how he came up with the  plan of the monastery, it turned out that there were never any design drawings, and that everything came from his mind. Venerable Miaojiang revealed to me that when he arrived at the monastery on the 10th day of the eleventh lunar month in 1988, he immediately recognized the white pagoda from a vision he had when he was reciting the Shorter Sukhāvatīvyūha Sūtra (阿彌陀經) at the age of 15. That was on the 20th day of the eighth lunar month in 1973, as he remembers clearly. Moreover, along with the pagoda, he also saw a grand monastic compound which has now been actualized at the Great Sage Monastery of Bamboo Grove. “This is ganying (感應, sympathetic resonance)—when you affect the Buddha and bodhisattvas with faith, they respond. The project has been effortless,” Venerable Miaojiang smiled. Ven. Miaojiang at the Ordination Ceremony. Photographed by Fu Yiqun

In the past 20 years, hundreds of followers of Venerable Miaojiang have come to Mount Wutai to be tonsured or ordained under his name. Some of his disciples have become abbots themselves; some go on to Buddhist academies or comprehensive universities. Meanwhile, the Great Sage Monastery of Bamboo Grove is reviving its historical role as a center for Buddhist studies. Apart from educating generations of monastics living at the monastery, teachings are also organized on a national scale, each year, for both sangha members and lay Buddhists. In 2016, the Wutai International Institute of Buddhism and East Asian Cultures was established, which brings together monastics and scholars, from home and abroad, to exchange ideas and enrich the research on Chinese Buddhism. Since 25 May this year, the Great Sage Monastery of Bamboo Grove and the Bishan Monastery have been co-hosting a solemn ordination ceremony which will last for a month. It has drawn around 1000 novice monks and nuns from all over China. Unlike most monasteries on Mount Wutai, the Great Sage Monastery of Bamboo Grove does not charge entry fees. In fact, the growing popularity of the monastery has given rise to new opportunities for the locals, as they opened up restaurants and hotels for the increasing number of visitors. The benevolence of the Great Sage Monastery of Bamboo Grove is not limited to people at Mount Wutai or in the Buddhist community. Venerable Miaojiang has generously donated to disaster relief initiatives, such as the 2008 Chinese winter storms, the Wenchuan earthquake, and the tsunami in Indonesia, as well as to sponsoring more than 20 schools in China.

“The role of a monastery has never changed from the past to the present,” Venerable Miaojiang said. “A good monastery, a good monastic, or any good place should help to shoulder the responsibility of the nation and save the commoners from sufferings. Throughout the history of Chinese Buddhism, this is how we sangha sustain the wisdom of the Buddha and keep the dharmachakra turning.”

* See Song Biographies of Eminent Monks (宋高僧傳) compiled by Zanning in 988.
** See The Record of a Pilgrimage to China in Search of the Law (入唐求法巡禮行記) compiled by Ennin in 847.