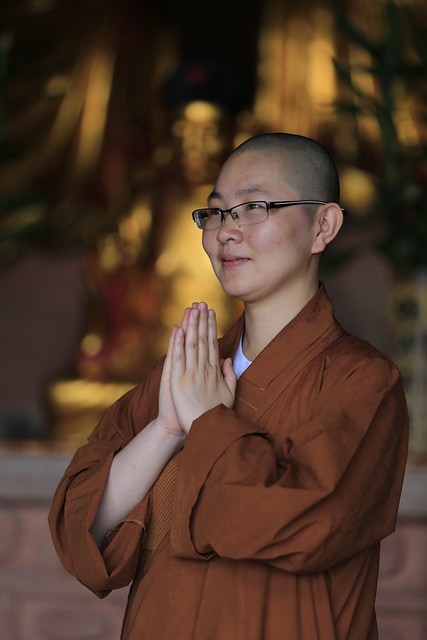 Venerable Zhankong (湛空) is well-trained in Buddhist texts and cultivation, and, moreover, through her work and academic studies in China, she understands well the physical and mental suffering of ordinary people. She was tonsured in 2002, when she completed her BA in medicine. Having spent three years in relative isolation on the Zhongnan Mountains, she decided to put the bodhisattva ideal into practice through charity and social work. Ven. Zhankong is now a lecturer at the Buddhist Academy of Guangdong, while pursuing her PhD in Managerial Psychology at the Chinese Academy of Sciences. At the 2013 National Buddhist Sutra Interpretation Contest, Ven. Zhankong referred to examples in the Platform Sutra of the Sixth Patriarch (六祖壇經) to illuminate how the principle of non-duality in Chan Buddhism can resolve mental issues in our modern times. In this interview, she shares some of her stories and work practices.

Buddhistdoor Global: Why did you join the monastic order and why did you choose to study psychology?

Venerable Zhankong: First of all, I am from a Buddhist family. Since my great-grandfather joined the monastic order, each of the following generations has produced monastic sangha members. The youngest brother of my grandfather was tonsured at the age of three. He was very influential in his time. He brought Buddhism to my hometown and benefitted many locals. I am the fourth generation of monastics of my family. Another equally important factor is that I studied medicine for my undergraduate degree. During that time, I was searching for purpose in my life. I saw how people suffered from aging, illness, and death. I experienced with them the fragility and resilience of life. Particularly, my internship in an emergency room propelled me to contemplate the ultimate questions, such as how we spend our lives, what we live for, and what happens when we die. Eventually, I found all my answers in Buddhism. After careful consideration, I chose to join the monastic sangha. I inherited my faith from my family, but my life purpose will be realized through such a choice. It will continuously move me forward in the ocean of the Buddhadharma.

My interest in psychology came later. When I joined the monastic sangha, I was assigned to work at the reception of my monastery, which is called ketang in Chinese. I found that many of the people who go to monasteries are not motivated by faith, but rather by the wish to solve problems in their daily lives. While a lot of these problems stem from our minds, most people never face what is on their mind, nor do they dare to do so. On the one hand, we all yearn to be understood and helped. Yet on the other hand, we fear that others will know what is on our mind. Hoping to help these people, I started to look for ways to do so. By chance, I encountered the discipline of psychology. Ten years ago, I became a certified psychological counselor. Over the years, I have also tried to integrate the wisdom of Buddhism into my practice, and it turned out to be increasingly effective. I am happy to see my own growth by helping other people. As a Buddhist monastic, I am motivated to carry on with this meaningful cause and I hope to do better in the future.

BDG: Could you please explain the relationship between psychology and Buddhism? One is a modern science that was developed in the West, while the other is ancient wisdom of the East. Is there any conflict? Is it even possible to compare them?

VZK: This is indeed a big question. As a scientific discipline, psychology is very young, but it advanced rapidly in the 20th century. Psychology is also very complex, encompassing a great number of subfields while becoming increasingly integrated with other disciplines.

Sometimes, it is impossible to find links between psychology and Buddhism, for instance in the subfields of psychology where methods of natural science are emphasized. However, when it comes to subfields like psychoanalysis, analytical psychology, humanistic psychology, and supra-personal psychology, we can find similarities with Buddhist analysis of the mind (心, citta) and consciousness (識, vijnana) as well as with the experience of self-cultivation. In fact, psychologists in these fields are very interested in Buddhism. I remember reading an article by a Jungian psychologist who was interested in the guiding methods of Zen masters. He was humbled to learn how Zen masters solve people’s problems in an instant and even enlighten them because that’s the very technique that psychology needs.

Master Venerable Taixu (1890–1947) advocated the integration of scientific methods and yoga. He believed that through meditation and mind-management, one can gain wisdom and the ability to see the reality of oneself and the world. This idea has been gradually applied to the intersections of Buddhism and psychology, which can be described as psychotherapy in a Buddhist sense. Such therapy is greatly beneficial to one’s mental health as it enables individuals to surpass phenomena, understand themselves on a deeper level, and perfect their morality. Collectively, it also has the positive effect of relieving pressure on modern society as a whole. BDG: Based on your work practices, what do you think are the major mental-health problems in China and what are the causes?

VZH: From children, to young adults, to the elderly, and from students, to migrant workers, to white-collar workers, government officials, and corporate managers, people from all walks of life face a variety of mental issues. The top three mental problems in China are depression, anxiety, and insomnia, which is not significantly different from the rest of the world. According to international standards, Chinese people are generally slightly more depressed. However, in our assessment and treatment, we take these international standards with a grain of salt. The causes of depression can be individual or social. Depression as defined by Western psychology takes little consideration of the relative reservedness of traditional Chinese culture which has lasted for thousands of years.

That being said, one common problem of the Chinese is that we are not good at expressing ourselves. Indeed, in Chinese culture, tact is preferred to expression in interpersonal communication. Therefore, in our clinical cases we encourage participants to express their mental state through language, painting, sand play, and dance. Expression itself is a therapy. Sometimes, participants may over-express themselves in the process of treatment. However, such reactions can be adjusted with growing confidence and understanding.

Another problem of the Chinese is a lack of love, which is related to the above-mentioned problem of self-expression. It is quite common that children do not feel loved as they grow up due to the negligence of their parents. In some cases, parents are busy with work and leave their children with their grandparents. In other cases, two parents do not live in the same city, and thus their children do not receive proper care and attention. When these children grow up, they feel inadequate, fragile, and even escapist. In our work, we help them to feel love and accept love, providing loving support, which is called compassion in Buddhism. We combine scientific methods and Buddhism-inspired therapies such as loving-kindness meditation and right-mindfulness. Gradually, they feel fulfilled and empowered.

These are just some of my personal observations. BDG: As a woman, could you discuss some of the psychological traits of women, and how we can develop ourselves taking these traits into account?

VZK: The psychological traits of women are directly related to biological and social factors. In terms of cognition, women are in general faster than men in reading and comprehension. However, when it comes to the perception of details, women are not as accurate as men. Women have better memories than men, but men usually perform better in logical thinking tasks, such as deduction and induction. Women have greater patience and a sharper intuition, and they are more loyal and prudent. Moreover, they are more flexible and quick-witted, so it takes less time for them to get out of a predicament. Regarding verbal skills, girls normally start to talk earlier than boys, and that is why they are often found to perform better at school. Women are also better communicators, so they are able to reduce stress through expressing themselves. Mentally, women mature earlier, but develop slower in later stages compared with men.

These observations are based on physiological and psychological statistics. They are by no means comprehensive, but on the whole, women unavoidably have physical and psychological reactions when experiencing menstruation, pregnancy, labor, and breastfeeding over the course of life. Because women are, in general, more sensitive and emotional, it is very important to be aware of these reactions and to understand them. When we are able to communicate with ourselves, we will have less anxiety and confusion. However, while women are generally good at expressing themselves, we should also learn to protect our privacy and safety.

Regardless of gender, one should find one’s place in the world and identify one’s life purpose. Live according to your principles, and I’m sure you will have a happy life.

Buddhist Psychology for the Modern World: An Interview with Lene Handberg
Josh Korda: Where Buddhism, Life, and Psychology Meet
The Science of Mindfulness and Beyond: An Interview with Prof. Richard J. Davidson, PhD
Spiritual Bypassing and the Dangers of Unresolved Emotional Wounds
Procrastination, Determination, and Compassion