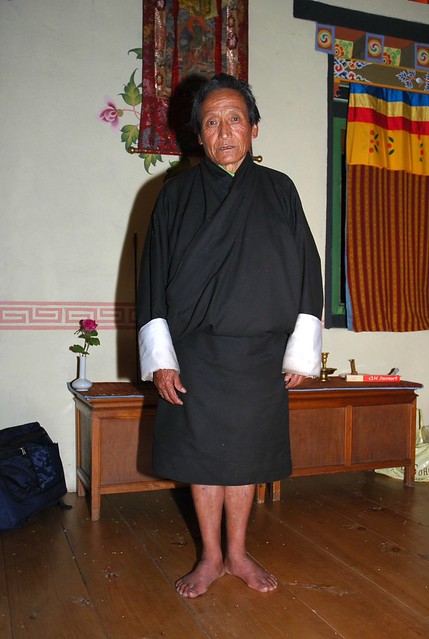 American former athlete Mike Borre spent a month in the Kingdom of Bhutan in 2006, visiting seven different healers, each of whom provided their own traditional treatment processes and techniques. Mike suffered from young-onset Parkinson’s disease and, although only 45 years old, he had already endured the condition for 13 years when he made these healing visits. Mike had availed himself of the best and most current Western medical treatments, including a powerful drug regimen and a pacemaker in his heart that regulated a deep-brain implant intended to stabilize dopamine production, which becomes irregular and uncontrolled in Parkinson’s patients. He arrived in Bhutan with a serious palsy, a foggy mind dulled by his medication, and the recipient of highly invasive surgeries. When he left a month later, it was with a clear mind; he took no drugs and had shut off his pacemaker. His palsy likewise had subsided, although his gnarled hands and limbs retained their scarred shape.

This account is the fourth part in this short series detailing Mike’s healing encounters. Parts 1–3 can be found in the links below. In this account, Mike meets Pawo Dorji, an indigenous healer from Bhutan’s Bumthang Valley, a man known as an oracle, whom some might designate a Bon oracle—a master of pre-Buddhist religious and shamanic practices—but Pawo Dorji and the villagers of Bumthang did not call him a Bonpo. They were specific in that what he did was not Buddhist, but something older, and that he was marked from a very young age, when Pawo Dorji would “disappear for days only to be found in the top of a tall tree many kilometers away.”

When found, he would magically appear alongside the others on the ground. These disappearances increased in frequency, and it was discovered that the boy was being trained by a shaman who lived in the mountain forests between Chumey and Ura in Bumthang. Pawo Dorji’s apprenticeship with the older shaman lasted nearly 20 years until he was 25 years old. Until this time he resided in the mountain fastness, before finally returning to society to marry and to heal others for the remaining years of his life. His rituals contain Buddhist elements, as agents to pass through going backward in time to a more ancient dimension. Pawo Dorji is a shaman trained in the mountains by another shaman. 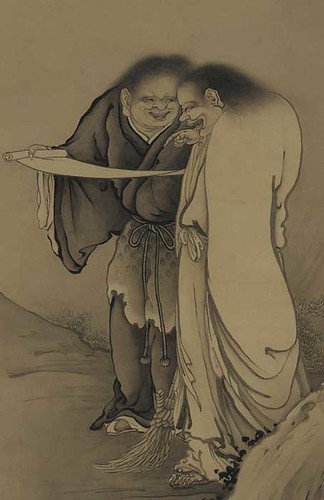 Japanese hanging scroll by Hashimoto Gaho of
Han-shan and Shih-te (Kanzan and Fittoku), eccentric
Chan (Zen) hermit-monks from Tang dynasty China,
whose mad enlightened poetry is popular in the
West. Pawo Dorji bore a striking similarity to many
ancient paintings of mountain hermits and sages

Unlike other healers Mike had encountered, healers who promptly assured Mike they could rid him of his illness, Pawo Dorji’s style of shamanic healing included a diagnosis by King Gesar, the legendary monarch of archaic semi-mythological Tibet, a quintessential hero in every respect, the subject of an epic. Pawo Dorji would say nothing to Mike except that he agreed to conduct two distinct healing rituals for him, the first being a two-part shamanic journey for diagnosis followed by prescriptive behavior. The other ritual was exorcistic magic, in which the oracle conducts all evil into an object, in this case an egg. So the healing rituals by the celebrated mountain oracle Pawo Dorji began. Altar to King Gesar, 2006. From Core of Culture

Mike was fetched from our Chumey lodge by Longchula Dorji and his son Pema after they had purchased all the necessary ingredients for the ritual: rice, butter, cookies, and flour.  We all met up at a guesthouse on the river where an elaborate altar to the ancient pre-Buddhist epic hero Gesar was constructed beneath an already present thangka of the Green Tara. Gathered were:

A woven bow made of rice with an arrow wrapped in a scarf,
Two images of Gesar
One image of Guru Rinpoche
Two “1+4” butter sculpture torma
Two plates arranged with cookies
Two butter lamps
Seven small silver bowls with rice or water Pawo Dorji with Mike Borre in Bumthang, Bhutan, after completing the Gesar healing ritual, 2006. From Core of Culture

Pawo Dorji wrapped a single large crimson cloth over his simple, dirty peasant goh. This looked like a monk. Around his head he tied three long white silk scarves, giving the appearance of a traveler and foreigner, at least a conductor to another dimension. Eyes piercing, natural, and calm, they took on the sheen of trance. A scarf was also wrapped around the arrow and thrust between two images of Guru Rinpoche.

A dance, a type of shamanic qi gong—to mix traditions for a moment—was about to begin as Pawo Dorji, now wearing a six-paneled crown and holding a drum and a mallet, began uttering mantra ever louder, repetitive then changing modes. This would continue in various states, for some 45 minutes. Pawo Dorji placed the drum directly in front of his mouth as the mallet struck in the very air where the mantra was being uttered again and again.

He began an elegant, spritely pace around the circumference of a large circle drawn on the ground. At the completion of a full counter-clockwise circle was a ritual bow, and the pattern was repeated this time going in the clockwise direction. A ritual bow punctuates the cycle, and on and on, tracing circles both direction, all the while chanting mantra in a range of voices modified from years of ritual discipline.

A pace is an ancient pattern of steps that is not quite a dance, but more like a syncopated ritual way of walking, certainly it is not a mundane movement, but a higher physical expression. Perhaps the stereotypical halting pace of a bride in her white gown walking down the aisle provides a good example. Pawo Dorji performed a pace around the edge of the great circle with a simple dynamic: in the circle, out of the circle. The pace had one step forward, and one half-step backward, and repeat on the other leg, which in variation produces a rocking gait, weaving along the band of the circle.

It was somewhat amusing to watch Pawo Dorji place his left foot, then cross the right foot over the left to tap inside the circle on the floor. Of course, there was then the tapping of the left foot, crossing the right, on the outside of the circle. While all this eccentric choreographic deliberation of inside/outside was going on, Pawo Dorji would shift his voice and his chanting.

He would double the tempo of the beat as he danced around the circle, this time crying out a litany of holy names beginning with local deities, then Buddhist patriarchs, then the ancient greats, and finally to King Gesar himself. These litanies were interspersed with basic mantra chanting to a single beat, and also to a dramatic ritual expression. Twice in the course of 40 minutes his drumming increased violently and he shook wildly—not stamping or pacing; not in any regular rhythm. It was a ritually induced vibratory state. When these ended the mantric circling continued. After about 20 minutes and countless paced circles, Pawo Dorji was channeling the hero Gesar, speaking in a high, tender, urgent streaming voice. He stopped moving and drumming. Gesar altar detail. Note the butter sculpture effigies, arrow in the rice, images of Guru Rinpoche and King Gesar among the sticks of incense, 2006. From Core of Culture

On hand was a translator who spoke Kham, a form of Tibetan that Pawo Dorji channels but does not actually speak. A three-way conversation between Gesar, the translator, and Karma Tshering speaking for Mike, took place for about 15 minutes. It was calm and responsive and at a normal volume. Pawo Dorji’s voice and countenance changed several times in unusual ways, changing voices as if a different being altogether. Pawo Dorji tells us he does not remember anything he says when in a trance. Here is what Gesar said:

1. Mike’s shaking will stop, but he will not be returned to exactly as he was. He is different from others.
2. He was harmed by a naga water deity when he was young.
3. He was once a high Buddhist lama.

At the peak of embodying Gesar, Pawo Dorji spoke in three long conversation passages of about five minutes each. The conversation was not only verbal. It included grunts, gestures, and clarifications of the translator to the Pawo. It was very similar to a casual conversation. Pawo’s voice was at times low and strong and resonant, and at other times, high, weak, and urgent. His facial expression changed radically, not seeming to be the same person.

The prophecy and statements of necessary rituals were translated by the translator with Karma. In the course of the Gesar-speaking ritual, Pawo Dorji approached the altar and magically produced a grain of rice on his finger, which he passed to the translator. I saw this three times myself. He produced about five separate grains of rice from thin air. He returned to channel Gesar for Mike’s proscription. Mike was to abstain from Rahula foods. Rahula is a great naga deity, half snake and half man. The snake’s body is covered in eyes, and Rahula sees everything. Mike was required to enlist two monasteries to devote month-long rituals for Rahula in his behalf. 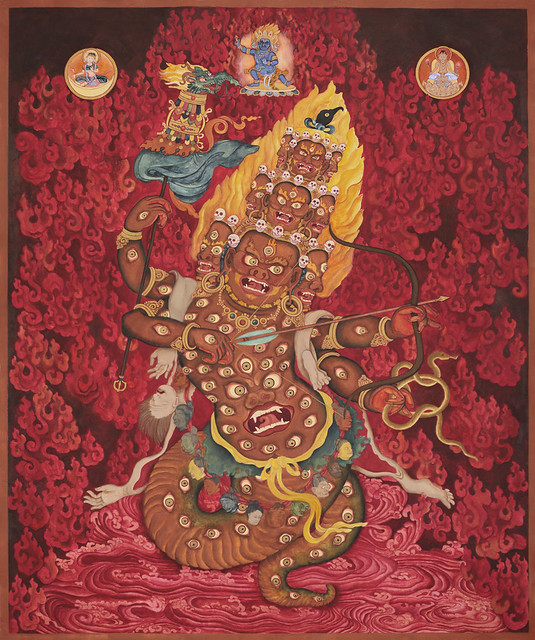 Sitting transfixed, Mike broke into a profuse sweat. His eyes were very clear and he rarely blinked. His energy seemed to me to be in front of his body; on the top half of his body; and above his body emanating from his head. He was full of power and calm.

Pawo Dorji unwound his mantra litany from Gesar to the Ancients, to the Buddhist patriarchs, to the local deities, to Pawo Dorji with Mike Borre. The translator removed the two ritual torma, took them outside and destroyed them. Pawo Dorji bowed right and left, then paced the circle one final time, counterclockwise, then clockwise, rehearsing the unsolvable question with his spritely footsteps: inside or outside? He was like a snow lion dancing on the bridge between Heaven and Earth. He faced the altar, removed his crown, and began to take the altar apart.