The Museo di Arte e Cultura Orientale (MACO) in Arcidosso, Italy, is becoming an increasingly important cultural asset in Tuscany. Founded in 2014, the museum was created by its advocate and original patrons, Dzogchen master Chögyal Namkhai Norbu and family, with the intent of sharing with a wider public their collection of more than 5,000 artifacts, which they have brought together over the last 70 years. The collection includes works of art of inestimable value and profound cultural significance, crafts and costumes, votive objects of considerable historic importance, as well as a significant collection of manuscripts and publications directly related to Namkhai Norbu’s research, along with a media archive, which documents many facets of Tibetan and Central Asian culture. Meditation in Motion, Footsteps to the Sublime (September 2019–October 2020) is the second iteration of an exhibition featuring the revealed Vajra dances of Namkhai Norbu, and now, in this museum exhibition, the fuller Buddhist and Dzogchen context of visionary dances. Dance in Tantric Buddhism is a unique expression of this form of religion. Cham dance in monastic Buddhism was originated by Guru Rinpoche after visiting Bhutan and Nepal from the Swat region of modern day Afghanistan. He introduced Tantric Buddhism to Tibet when founding Samye Monastery in the eighth century and using Cham dances to subdue the indigenous deities. The dance transformed them into Dharmapala, protectors of Buddhism, and established a protective dance forcefield around the practice of Tantric Buddhism—one that has never been fatally broken or made extinct.

The origin of dance in Vajrayana Buddhism, especially of the oldest Nyingma school, is derived from yogic visions. Meditation in Motion moves from the origins of dance in Tantric Buddhism, with the consecration of Samye Monastery by Guru Rinpoche in the eighth century, and revisits the sacred dances of other terton (treasure revealers) who have translated their experiences from visions into meditative dance practices.

Many of these Treasure Dances that originated over the past 1,200 years are still practiced today in Bhutan, India, Nepal, and China, in the Tibet Autonomous Region, Sichuan, Gansu, and Qinghai. Dances from each of the Vajrayana orders are displayed, and teachings from Tibetan Masters regarding the profundity of the underpinnings of Dance in Buddhism are shown.

Among the many splendid and extraordinary accomplishment of the late Chögyal Namkhai Norbu, was the revelation of several sets of visionary dances that were taught to him in a series of lucid dream-yoga states over the course of two years. These Vajra dances are recorded, as are accounts of the visions themselves. Namkhai Norbu has recorded the mandalas upon which the dances take place, as well as detailed choreographic explanations. There is evolution in the Dzogchen dances of Namkhai Norbu: they are for both men and women, and are intended for lay, not monastic, practitioners. Today, thousands of Dzogchen practitioners perform these Vajra dances in centers all around the world.

Because the widespread disruption caused by the novel coronavirus pandemic means that few people can travel to Tuscany to see the beautiful and uplifting exhibition at MACO, we have decided to share here some video content relevant to the exhibition themes, including rare accounts by the Sakya Trizin, and archival documentation of Pema Lingpa dances from the Kingdom of Bhutan. Pema Lingpa, a 15th century Bhutanese saint, is the treasure revealer perhaps best known for his extant dances, of which there remains a complete canon. MACO has also decided to extend the exhibition through October 2020. 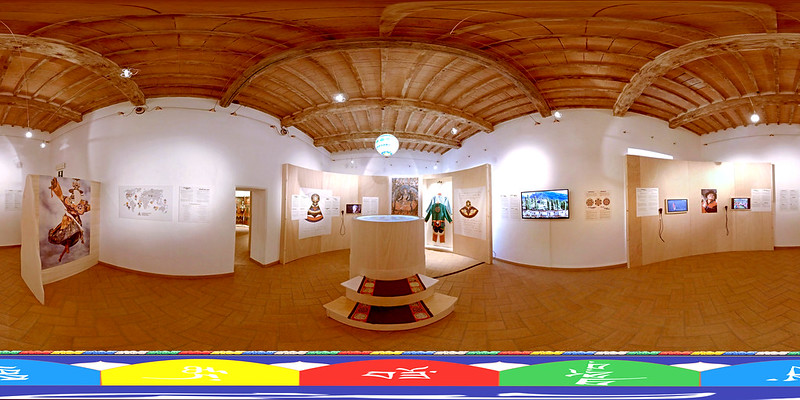 The Ging Sum, a three-part, three-hour ancient dance masterpiece, shows the Ging (sky heroes of Zangdopalri ) in three forms: Jug Ging, wherein evil is divined by wands, then Dri Ging, wherein evil is slain by mystic swords, and finally the spirit is released when Nga Ging, playing drums, escorts the spirit to liberation. The complete dances of Pema Lingpa were recorded at Yungdrung Choeling Dzong in 2006 and are available at The New York Public Library: Digital Collections.

Namkhai Norbu’s modern visionary dances grow from his love for Tibetan dances generally, and his belief that they bring spiritual composure and joy to everyone. To this end, he also crafted Khaita dances, based upon actual Tibetan folk dances. Namkhai Norbu forcefully acknowledges the reality that Tibet is a dancing culture, top to bottom, and that the role of dance is profound, even in the simplest setting of devotion and social gathering. The originality of Namkhai Norbu’s teachings has been to choose to elevate sound and movement, singing and dancing, into a path toward self-discovery and freedom.

Western scholars, by and large, miss this obvious fact about Tibetan Buddhist expression. Dance is more important to Tibetans than painting; dance is more important to Tibetans than to Westerners. It is a vehicle of mystical conveyance. It is life and identity, spiritual and local. Appreciating what dance means to cultures that practice Buddhism is an important evolution of the West’s comprehension of Buddhism. Namkhai Norbu has contributed greatly to that endeavor.

What is presented in this article are a series of videos:

Sakya Trizin speaking on the significance of Cham dance

In these, the tradition of visionary dance in Buddhism and Dzogchen can be seen, and seen to be alive today, in both the extant Cham treasure dances and in the transcendent Vajra dances of the Dzogchen community. While there are some historical accounts of Tibetan yogis chronicling their visionary journeys to Zangdopalri to learn dances that they later taught to monks, nothing matches the clarity and historicity of Namkhai Norbu’s interviewed account of his dance visions. These videos cannot be shared online for reasons of sacredness, but are shown in the exhibition at MACO.

These surviving monastic dances are world treasures and inspirations to students of Vajrayana Buddhism. That Pema Lingpa’s nearly 600-year-old dances are performed, not only with vibrancy in multiple locations, but in two versions: monastic and lay, is astonishing cultural purity. That Namkhai Norbu’s visionary dances express evolution and contemporary global community is a testament to the Eternal Springtime that spiritual renewal promises.

Dance in the Reality You Have
An Eye, a Lens, a Dance
When Dance Transforms
Zen Master Merce