The surge of public interest in Buddhist spirituality in China is relatively recent, having come to the attention of local and international media only since the 2000s. The academic study of Buddhism in China, however, predates this popular renewal by a few decades. Something of a heartland for rigorous and quality Buddhist studies is Zhejiang University, in the “Southeast Buddhist land” (東南佛國) of the city of Hangzhou. Founded in 1897, the university is one of the country’s most prestigious and discerning tertiary institutes. Here, Dr. He Huanhuan, who at 33 is the youngest professor in the religious studies cohort, has founded the Buddhist Resources and Research Center after only two years as a faculty member. The center is working on two major projects, both of which utilize cutting-edge technology to develop digital libraries: the Buddhist Universal Digital Archive (BUDA) and the Sanskrit and Chinese Buddhist Library Network.

I met Huanhuan back in March. She was kind, engaging, and exuded a spirit of earnestness about her academic calling. She says that Zhejiang University is constructing a modern “Pure Land” for Buddhist scholarship—an ambitious plan to create an environment to where the very best of Buddhist Studies talent in China and beyond will be attracted.

During high school Huanhuan encountered her mentor, the Tibetan Studies scholar Wang Yao (王堯), to whom she attributes her formative interest in Buddhism. “When I was 17 years old, I left my hometown in Hangzhou for the first time to go to Beijing at Prof. Wang’s encouragement,” she told me. “I knew nothing about Buddhist studies but already admired deeply his temperament and knowledge.” She entered Minzu University of China and began learning from Wang, having resolved at this early stage to commit to the long-term study of Buddhism. After completing her bachelor’s degree, she skipped the master’s degree program to enter the doctoral course at Peking University’s Department of Philosophy under Prof. Yao Weiqun (姚衛群).

“At that time, there were few students in Buddhist studies: just me and two master’s students. On campus, if we were asked the subject of our research, we would always be greeted by surprise and suspicion: ‘Are you kidding? Are there Buddhist studies at this university? Do you have to become a nun after your PhD?’” Huanhuan recalled. “Nowadays, after more than a decade, my juniors probably rarely receive these kinds of questions. Buddhist studies in universities, both in terms of quantity and quality, have greatly improved in past 10 years, and many in society have gradually realized that Buddhism is not a superstition, but a living subject of belief as well as an object of academic research.”

In 2008, funded by the China Scholarship Council, she went to the University of Tokyo for her doctoral dissertation under the supervision of Prof. Saito Akira, a leading specialist of Indo-Tibetan studies and languages, particularly of the Madhyamaka school. She returned to Peking University, received her PhD in 2011, and then worked for five years at the Institute of Philosophy in the Chinese Academy of Social Sciences. She recalls that period as her freest and most comfortable time as a professional scholar. 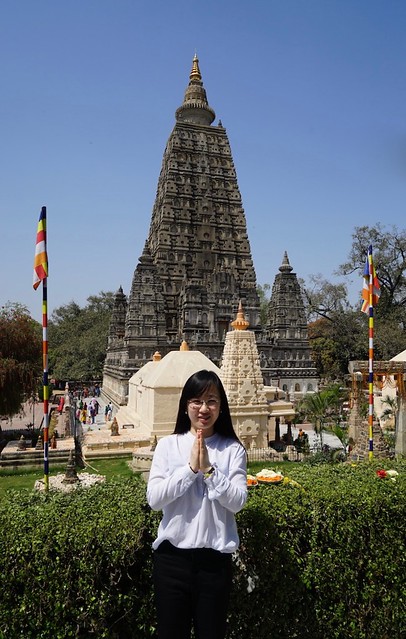 Dr. He Huanhuan in Bodh Gaya

In 2014, while doing coordinate research at the Harvard Yenching Institute, Huanhuan sent her resume to Zhejiang University and to her great surprise was able to speak to the university’s executive vice-president Prof. Song Yonghua (宋永華), thanks to the help of Prof. Huang Huaxin (黃華新), dean of the School of Humanities. Having gone from strength to strength, she feels that Zhejiang University has more than done its part to support the Buddhist studies discipline. “Not only are my own research and projects going well, but I also have encountered many good students I had few chances to meet previously.”

This year, she is the advisor in charge of a class of 38 freshman students, most of whom are fresh out of high school, achieved good grades in their university entrance exams, and are very interested in Buddhism, much to Huanhuan’s delight. “Some of them read Buddhist classics in high school, some were influenced by their grandmothers or other family members who believe in Buddhism,” she noted, adding that students of many professional backgrounds, including STEM subjects, attend her public lectures.

“One young Russian woman applied for the doctoral course last year, and a young American man applied for the master’s course this year. Both of them enrolled successfully with a full scholarship from the Chinese government. They have a strong interest in Asian Buddhism and can speak fluent Chinese. I hope that they will become good scholars and return to their home countries to teach Buddhism in the future,” Huanhuan related. “At BUDA, two of the three post-doctorates are from overseas: Japan and Sri Lanka. Foreign scholars and students have contributed to the increasing interest and enthusiasm of our local students.” She also believes that Chinese students become interested in Buddhism upon graduating in another humanities subjects, like such as history, literature, or philosophy—as was the case with the three PhD students she supervises.

I also asked her if she had any advice for budding scholars of Chinese Buddhist studies. Despite her spirit of dedication, years of hard work, and sharp academic mind, as a Buddhist she is naturally self-effacing and attributes many of her achievements to luck and the karma of previous lives. If one is blessed with similarly good karma, she would suggest the following: “Try to learn languages as early as possible, and as many as possible. Classical Chinese is very important, as well as Sanskrit and Tibetan. Modern languages such as Japanese and English are very helpful.

“Go to study in Japan for a while, regardless of the subject of research. At the moment, few countries in the world are comparable to Japan for its profound tradition of Buddhism and great vitality of Buddhist academia.” Huanhuan greatly admires the cultural and academic traditions of what she sees as a Buddhist country, and hopes that mainland China can one day set up departments of Buddhist studies in universities like that at the University of Tokyo, and even have some professorial Buddhist universities, modeled on the International College for Postgraduate Buddhist Studies in Tokyo or Ryukoku University in Kyoto. Dr. He Huanhuan in Ulaanbaatar

“While maintaining our interest in the past and tradition, we need to be willing to learn things that are fresh and interesting. For example, the recent rise of big data and AI might influence the development of Buddhism and Buddhist studies in all their aspects,” she noted.

Huanhuan’s mentor who started her on this long and fruitful journey, Prof. Wang, passed away in 2015, around the time she assumed her position at Zhejiang University. It is not surprising that he is the one she admires most and of whom she has spoken most highly. “It is too easy and too hard to say why, not only because he is the scholar who led me into this field by his two hands, but also because of his great scholarship and firm belief in me,” she reminisces fondly. He is surely proud of her.