Home » Features » Commentary and Buddhist Perspectives » I Want What I Want When I Want It! The Four Noble Truths in Daily Life: Part Two

The second of the Buddha’s Four Noble Truths is about the origin of suffering—namely, craving. While many other causes of suffering may appear in our minds, there’s always an element of wanting in the suffering. Pain arises on its own and is unavoidable. It’s the thought of wanting things to be different that causes the emotional experiences of suffering, dissatisfaction, or sorrow­—dukkha in Pali.

A few months ago, some difficulties arose in my visa application to move to the United States. In frustration I said to a friend: “I just need to know what is going on!” And she, in all her wisdom and love, replied: “I want what I want when I want it!” I was taken aback. This was serious! The worry about the paperwork seemed reasonable. I wanted sympathy! But all that she had to offer was a translation of the Buddha’s Second Noble Truth, reminding me that it was my wanting and not the situation that was causing the suffering. I pouted inwardly for a little while until I saw that she had offered me a jewel of wisdom. Now when I’m suffering I repeat this phrase to myself and soon realize that I’m the source of my own suffering. It brings clarity, curiosity, and a sense of humor into my practice—three essential qualities for turning suffering into freedom.

Nonetheless, there are still days when I find myself caught in a loop of stressful thinking. When I notice this, I say to myself: “Wait a minute Sister Ocean, this is unnecessary suffering. It can be stopped!” Sometimes, simply noticing the “unnecessary-ness” of suffering is enough to transform it effortlessly. At other times, there is an inner reaction that believes the suffering is important, and we seek to hold on to it. When I can hold the whole situation of pain, suffering, and seeing the “unnecessary-ness” of the suffering with kindness and a sense of humor, it’s easy to let go of the suffering. However, when I turn the Second Noble Truth into another stressor, the dukkha just becomes stronger. There’s no mistaking intellectualization for insight.

I hear many practitioners say, “I know that I shouldn’t feel this way but . . . I’m just so angry . . . I feel so lonely . . . I can’t stop this depression.” They’ve heard teachings on the Second Noble Truth and turned them into another reason to feel guilty or shameful. This is the opposite of learning to simply see craving for what it is when it arises. There’s nothing wrong with wanting to be happy—in fact it can be a great motivator on the path and a foundation for true peace. However, trying to suffer one’s way into becoming happy (feeling frustrated over one’s anger, loneliness, or sadness) is a sure way to keep happiness at bay.

Byron Katie is not a Dharma teacher, but in her book Loving What Is she explains the direct connection between “shoulds” and suffering:

I’ve never forgotten this funny example of trying to teach a cat to bark, but the issue goes much deeper than cats and dogs. The moment I hear the “S-word” (should), I know that the practice, mine or someone else’s, has gone off-track. “I shouldn’t feel sad” is really saying, “I feel sad and resisting the sadness seems easier than just feeling the sadness.” While it’s easy to turn the Second Noble Truth into a “should” (as in “I know about mindfulness practice. I shouldn’t feel this way!”), mindfulness simply needs to be turned towards the “should” to get to the root of the craving—craving for things to be different than they are. This even applies on a global scale. When I feel overwhelmed and outraged by the injustices in the world, the “should” becomes: “The world should be different from the way that it is.” There are certainly some changes that would reduce suffering in the world, but when I get stuck on my own suffering over the pain of the world, I have less capacity to relieve anyone else’s suffering.

The Second Noble Truth goes much deeper than “shoulds” and wanting what we want when we want it, but even if one were to only practice with these two points, one could cultivate a deep practice and much inner freedom.

The Four Noble Truths are very simple to say. “Suffering exists; it has a cause; it has an end; and it has a cause to bring about its end.”* What makes these teachings revolutionary is how they differ from our habitual thinking, and how liberating they are when applied.

Is Life Suffering? The Four Noble Truths in Daily Life: Part One (Buddhistdoor) 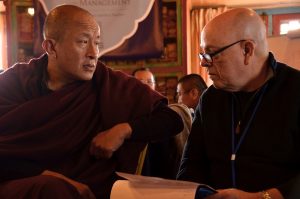