A number of media reports have been published in recent weeks detailing the Shambhala Buddhist community’s admission of, and response to, abuse of community members by some of its teachers. Shambhala, one of the West’s largest Buddhist organizations, grew out of the Tibetan Buddhism taught by Chögyam Trungpa Rinpoche.

Trungpa (1939–87) himself was a colorful and controversial figure, who drew together a community of Western devotees and founded the Naropa Institute (now University) in Boulder, Colorado, before dying at the age of 48 in Halifax, Nova Scotia. It is now well known that Trungpa slept with many of his female students, and that his appointed successor, Ösel Tendzin (1943–90), also slept with many students, including while knowingly infected with HIV in the later years of his life. Despite the lack of resolution to the controversy that surrounded Tendzin’s role in Shambhala, many in the community believed that the problems of sexual misconduct were now behind them.

However, a detailed, 39-page document titled Project Sunshine: Final Report, published in February, examines the alleged abuses of power by members throughout the Shambala community and explores the extent of this ongoing issue, noting that Shambhala has since removed several male teachers from their positions.

The report’s author, Andrea Winn, who describes herself as a Dharma brat—a second-generation Shambhala Buddhist, grew up in the early years of the Shambhala community. “The story of this community, both the light and the dark, is literally in my bones,” says Winn. I spoke with Winn about her life, growing up in the Shambhala community, leaving after years of abuse, and then coming back in the hope of bringing healing to others.

Buddhistdoor Global: Can you tell us a little about your experiences growing up in Shambhala.

Andrea Winn: My parents were hippies in the early 1970s. It was a time of freedom and excitement for them. They decided to search for a spiritual community and, as the story goes, they went alphabetically through the current-day spiritual trips and got as far as “T” for Tibetan Buddhism. They met Trungpa Rinpoche in the San Francisco Bay Area, and to this day are both dedicated Vajrayana practitioners.

I was at the 1975 and part of the 1981 Vajradhatu Seminaries as a child. I attended the 1985 and 1986 seminaries on my own as an adult. I moved out from home at age 17 and lived at Shambhala’s Rocky Mountain Dharma Center for a little over a year.

I was first sexually abused in the community when I was around seven, and again by multiple men during my teen years.

At the same time, I attended the Black Crown ceremony with the 16th Karmapa and had the opportunity to receive teachings from Kalu Rinpoche, Tenge Rinpoche, Dilgo Khyentse Rinpoche, and of course my root guru, Trungpa Rinpoche. Growing up in this community, I was fully loaded with experience and I did not have the capacity to sort it out.

I grew up as a polite shadow of a girl. When I gathered the courage to speak up about the abuse as a young adult, my friends and my meditation instructor forced me out of the community. 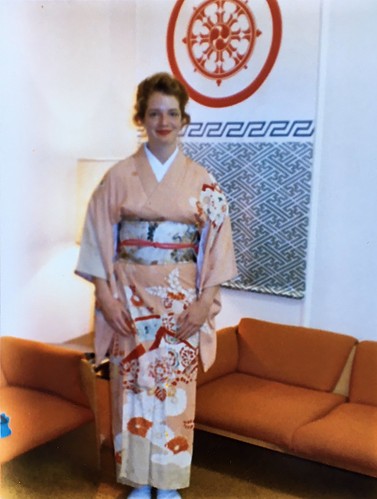 Andrea Winn at age 16, dressed up for an event in Boulder,
Colorado, where she carried an an offering (the standard 7
offerings on a shrine) and presented it to Chogyam Trungpa
Rinpoche. Image courtesy of Andrea Winn

BDG: Many people left the community and never looked back. Why did you seek to create Project Sunshine?

AW: It’s true—I had no intention or hope of ever having anything to do with Shambhala after the multiple times I was quashed by the community leaders. However, in the fall of 2016 I suddenly felt an urgent need to drive from Toronto to Maryland to attend a Yeshe Tsogyal empowerment. It was perhaps the most surreal experience I have ever had. I really liked the sangha at the center, and they liked me, and they invited me to come back the following month for a Tsog Bum retreat.

I accepted their invitation and returned. The rinpoche leading the retreat talked a lot about samaya,* and it got me thinking that I had broken samaya by turning my back on my vajra brothers and sisters in Shambhala. I started to wonder if perhaps I, as just one woman, could actually save an entire community. Well, you know, we all have these crazy thoughts now and again!

During this second trip, my love affair with that sangha only grew, and I felt so truly joyful to be part of a sangha again. It stirred a long-dead longing within me. Then, shortly after that second trip, the head of that centre did something totally outrageous—she sent an email to me and all of my new friends saying I wasn’t a good person to have around there and that I could never come back.

So it was the joy of finding a sangha, the shame and shock of how I was thrown out, and the thought that maybe my true sangha was the one I had long ago left behind, the Shambhala community. This is what led to my deciding to carve out a piece of work that I could contribute to the Shambhala community: Project Sunshine.

BDG: Can you tell us what that process of creating Project Sunshine looked like?

AW: The project covered exactly one year—the Year of the Fire Bird.** I identified a vision, mission and values for the project and scoped out five phases.

I reached out to women leaders in the beginning of the project. Six of them came to be part of a private discussion forum to explore questions about Project Sunshine. Once they became members, they did not engage—they simply watched. A couple of months into the project, when I began to approach and meet with Acharyas, half of the women left the group.

What I have learned is there is a break down in trust between abused women and the Shambhala leadership. This is an area that needs attention, and I would suggest Shambhala leaders could benefit from trauma-informed education so they can take their seat more confidently as leaders around issues of sexualized violence.

Then I reached out to a couple of the acharyas, senior teachers in Shambhala. Their response was that the problem had been taken care of long ago, and that I was mistaken. In particular, the meetings that I had with ministers Adam Lobel and Jane Arthur were fairly hard-hitting as I was attacked for being too demanding, too “intimidating,” and when I invited them to envision an abuse-free Shambhala, as I said in the report, their responses were: “This is not a priority for me,” “There is no juice here for me,” and “I am not interested.”

This was an excruciatingly lonely year for me. The one real source of support was from Judy Lief, who long ago retired from her role as an acharya. In terms of help and insight from the hierarchy, there was none. The meetings were challenging, and I always had to go away and sort out the weird dynamics that occurred in them. I would say that these meetings turned out to be more about me helping them. I saw ministers Lobel and Arthur develop a little more confidence and groundedness from working with me. Andrea Winn with her brother David (both in the middle of the image) at a children’s event with Chögyam Trungpa Rinpoche. Image courtesy of Andrea Winn

BDG: In February, Shambhala released a statement in which it promised to do more to ensure the safety of its members. Are you hopeful that they will follow through on this?

AW: No. I know that, at heart, there are good people on the council, but based on their behavior and what they are publishing, I hold no hope of their ensuring the safety of members at this time. I do hope that in time they will find the confidence to truly care for the community.

Right now, I see them doing what leadership typically does at this stage in the game. I believe they are working to control the narrative and protect the abusers, who are their friends in high offices. I reached out to ministers Lobel and Arthur on 28 February to ask them if they would like to collaborate on identifying a plan for community healing. They never responded to my invitation.

I’m afraid that everything I see coming from the council is aimed in the direction of darkness and cover-up. Again, I know that there are good people on the council and I think they are feeling torn about all of this. Unfortunately, they are letting themselves feel trapped into taking the road toward more harm. I am hopeful that in time they will become more grounded, and more prepared to tackle the problem of sexualized violence directly.

BDG: Lastly, can you talk about the response that the Project Sunshine report has received and your plans for moving forward?

AW: The report has received a positive response, and it has only been shared through informal routes. I asked ministers Lobel and Arthur if they could share the report through community communication channels. They did not respond to that email either. So people are only finding out about the report by word of mouth at this point. We have almost 400 people participating in a Facebook discussion group about the report.

Since, in my view, the Shambhala leadership does not seem able to provide a path for community healing, I felt inspired to create one based on my knowledge of healing and through my growing network of Shambhala people who really want to see this dealt with. We are developing a plan that will involve grassroots community meetings to be held outside of Shambhala centers.

There will be a graduated format with different levels of commitment for these gathering communities. We believe that the only real change can happen at the in-person, local level, which is why we are developing this approach. We will also gracefully share a communication about the gathering with the local Shambhala center so they are kept in the loop about our healing activities. There will always be the opportunity for the formal centers to engage the healing process.

This is just a thumbnail sketch. The full plan is exciting! It brings Shambhala values into engagement with community and healing wisdom from the conventional world. The full plan is going to be released at the end of this month when we launch our crowdfunding site to raise funds for Project Sunshine Phase Two.

* The vows or precepts given to initiates of a Vajrayana Buddhist order.

An Olive Branch: Reaching Out to Those Affected by Abuse in Buddhist Sanghas
The Dogma of the Buddhist Master’s Infallibility: A Reappraisal of “Buddhist Modernism”
Airbrushing our Heroes
Buddhistdoor View: Monasticism for the Young—A Considered Choice?