Home » Features » Commentary and Buddhist Perspectives » Enter the Dragon: A Primordial Being

Around 3000 BCE, as humans began to settle in significantly sized groups between the Tigris and Euphrates rivers, in what we now recognize as modern-day Iraq, stories of the dragon were shared. The Sumerians were to the north and the Akkadians to the south, before they were united c. 1750 BCE and became known as the Babylonians. Some 500 years later they were invaded by the Assyrians. This movement and merging of peoples during the time in and around Babylon, and the inevitable sharing of ideas, beliefs, and knowledge, resulted in what we consider the first recorded writing, literature, sciences and codified laws.

It is from Akkadian Cuneiform upon seven clay tablets, known as the Enûma Eliš, or the Babylonian Epic of Creation, that we learn about their complex and elaborate ideas and myths of creation, the natural world, and the point to their existence.

Enter the only two forces in existence: Apsu and Tiamat. Apsu was the void in which our world exists. It was also life-giving fresh water. Tiamat was the spirit of primeval chaos and the fresh water antithesis, salt water. Apsu and Tiamat maintained an energetic, tempestuous relationship, reminiscent of the interplaying push-pull of dark energy and dark matter at the universal scale, as well as within our own subjective psyches.

Tiamat is described as a monstrous and fearsome horned, scaly, serpent-like creature. Loathsome and terrifying. Oh, and also attributed as feminine. Makes one wonder if the male scribes had their own mother issues, let alone setting an early societal standard!

Apsu and Tiamat went on to birth a brood of curious gods, who, just like in many family dynamics, go on to vie for attention and power, and make a lot of noise, much to the chagrin of Apsu, who wanted them gone, permanently. However one of their children got wind of his intentions and struck the first deadly blow. Bereft at her husband’s death, Tiamat took revenge on her offspring with the aid of a new brood she had birthed for this purpose. But after an epic one-on-one battle, Tiamat was slain by her son Marduk and the new gods defeated.

Marduk’s reward was to be king of all the universe. And with his newly acquired Tablets of Destiny, he set to and created the universe as we know it, including, from the blood of a slaughtered god, a god-serving slave race known as humans. Thus it was born into our recorded psyche that the feminine was chaotic, to be feared and, ultimately, conquered, if not defeated, with dragons depicted as a fearful foe and forevermore cited in Western culture as a most terrible and formidable symbol.

Yet, in the cultures of the East, the dragon is anything but evil. All the way back to a dynasty during 2697–2597 BCE and the reign of the Chinese Yellow Emperor Huang-ti, the Bamboo Chronicle depicts Ch’i-lin as the noblest of creatures; a peaceful, benevolent sky dragon bestowing blessings and good fortune. Chinese dragons are highly auspicious, weather-controlling, and birth royal dynasties. In terms of success, the dragon is as good as it gets.

As Buddhism spread into China, the dragon seems to share much in common with the naga serpents of India, including the Lung dragons’ four major functions. Notably Shen-lung and Ti-lung, who bring the rain and rivers respectively, and Fu-ts’ang lung, who guards treasure. Most significantly, all dragons seem to have a relationship with the elements, namely water, and very often a treasure. This water element is most interesting in psychological terms, as the feminine energy that is no longer something to be subdued or slain, but encouraged.

There is an ancient story of Guanyin and a dragon, in which Guanyin, the bodhisattva of compassion, has been banished to a mountain where she befriends a dragon king.

The dragon king had two young sons who one day decided to turn themselves into fish to play in the water. However, they were caught in a fisherman’s net and taken to market. These two fish looked extraordinary, thought the fisherman, and were bound to fetch an exceptional price. Guanyin heard the dragon king’s cries of despair and so arranged for his sons’ rescue via a young boy, who beseeched the fisherman, appealing to his compassion to release the boys back to their father. So deeply touched were all those concerned by these events and by Guanyin’s compassion, that they devoted the rest of their lives to benevolent deeds and the dragon king’s daughter carried this wisdom in the form of a pearl.

In Chinese alchemy, the dragon is the “philosopher’s mercury,” whose treasure can only be found by those as pure and earnest as young children. Guanyin’s name is Mandarin in origin and translates as “she who hears all the sounds of the universe.” In Buddhism, compassion is usually associated with the masculine principle, known to us as Avalokiteshvara. However, as Buddhism traveled, he became a she, and during the second century CE, Avalokiteshvara became Guanyin—possibly due to the indigenous influence of Taoism in China. It is said that a student of Guanyin asked her why she was now a woman. Her response was, “Does it matter?” She will appear in whichever gender she deems most appropriate to the circumstances.

While dragon mythology has historically been vaguely interchangeable with serpents—from the ancient Assyrian, Egyptian, and Nordic serpents encircling our world, to the undoubtedly fantastical stories based upon actual animals extant at the time—around the world the dragon has nonetheless long been a tour de force to be reckoned with. We may have been taught to fear the dragon, as the dragon destroys, and the dragon breathes fire, yet from Egyptians, Nordic cultures, Hindus, and in East Asia, we have a water dragon. Water is associated with our emotional body, and like our home planet, we are physically composed of roughly 70 per cent water.

The dragon is primordial and powerful. It is the chi energy that breathes through us. The breath of fire is illuminating, incinerating all things spiritually deleterious. In alchemy, the dragon represents quicksilver—mercury—and within it the energy of the wise crone planet Saturn. Mercury (Hermes in ancient Greek mythology) was the only force able to freely visit the deep underworld and overworld.

When we think in mythological, psychological, and primordial energy terms, and the childlike purity of mind and spirit, we can say that it is our intentions and ensuing practice of compassion and wisdom that enable us to meet this fearsome power peacefully. It is a power that may take us into the depths of all that frightens us, but it is a power that can transmute darkness into the light; the dragon can help us rise again, but with wisdom.

May the energy of the dragon expand and energize our hearts! 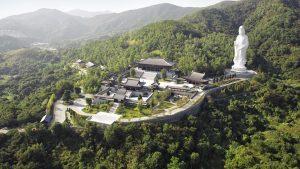