The pagodas of Myanmar are tangible, physical expressions of the vast accumulations of merit (Burmese: kutho, also known as hpon) by the Buddhist communities that support them. The pagoda, or stupa, typically forming the nucleus of a temple, is the focal point for making merit, which is customarily done through donations towards its renovation and the maintenance of ritual life in and around the temple. 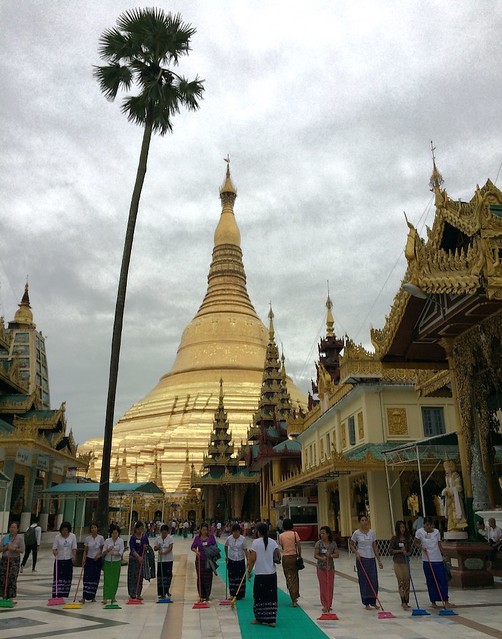 The Shwedagon Pagoda in the capital Yangon is the country’s most revered sacred site as it is said to house relics of the four Manusi Buddhas. These include the eight sacred hairs that Shakyamuni Buddha gave to two merchant brothers during his lifetime, as well as relics of the three previous Buddhas of our era—the staff of Kakusandha Buddha, the water dipper of Konagamana Buddha, and the bathing garment of Kassapa Buddha. These founding gifts are enshrined at the heart of the Shwedagon Pagoda and form a key part of the legends surrounding its origins. Inscriptions on stone slabs now displayed at the northeast corner indicate that the pagoda received royal patronage from at least the 15th century until the exile of King Thibaw in 1885, when the tradition of royal support for the Shwedagon Pagoda was replaced by state patronage. 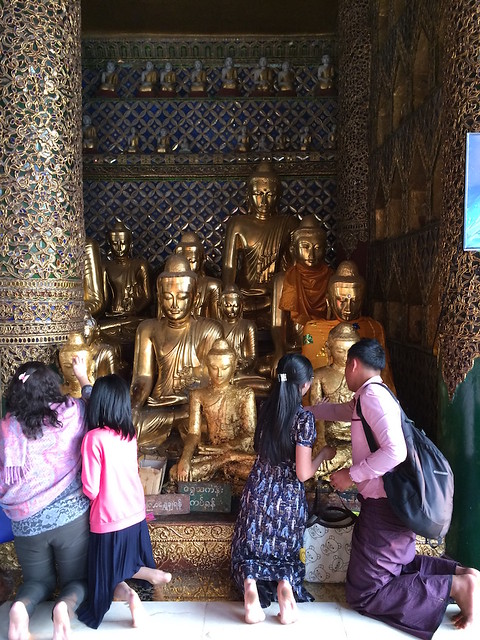 A number of royal gifts remain on the platform around the base of the pagoda, including King Mindon’s (r. 1853–1878) umbrella spire (Burmese: hti-daw) donated in 1871, which can be viewed in its own specially constructed stupa. This was replaced during large-scale renovations in 1999, when many of the smaller elements that had hung on the spire such as the weather vane and numerous brass bells were also replaced and the originals put on display at the museum. 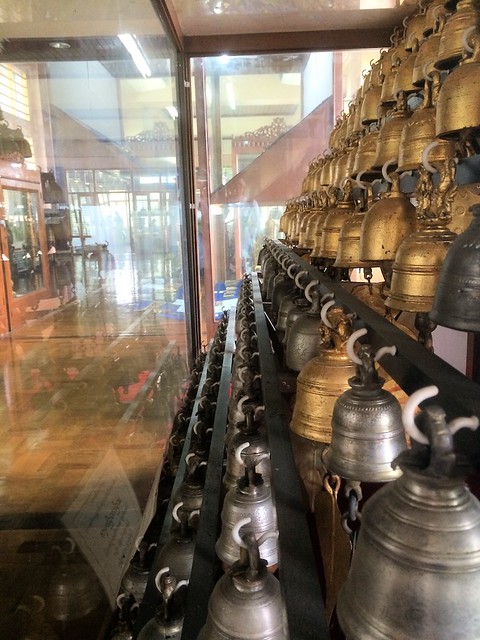 A display of bells at the museum

The Shwedagon Pagoda museum, which opened in 1992, is one of the most elaborate among the country’s pagoda museums. No mere dusty dusty storeroom, this three-floored building displays a large collection of objects. Situated in the northwest corner of the pagoda’s main platform, just beyond a pavilion housing King Singu’s (r. 1756–1782) bell, the new building originally housed the museum as well as a library and archive with collection of manuscripts. These other collections were eventually moved to a separate facility near the pagoda some years later.

Pagoda museums traditionally play an important role in storing and preserving the historical legacies of these sites. For the best part of the last century, gifts have been displayed in spaces ranging from a few glass showcases, to cabinets integrated into the architecture of the pagoda, to separate dedicated buildings. However the Shwedagon Pagoda’s museum demonstrates how, with sufficient support and interest, this role can be developed to include displays and exhibits that speak to a wider audience. The collections in the Shwedagon Pagoda museum include sacred relics, images of Shakyamuni Buddha, wish-fulfilling trees, and offering vessels made of precious metals. Objects that were removed from the pagoda and placed in the museum during the renovations in 1999 can also be seen in a permanent exhibition of photographs in a separate hall.* 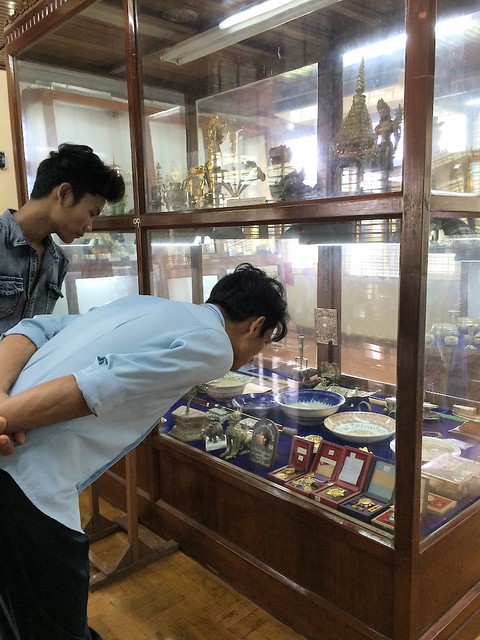 Other objects deemed worthy of donation are those valued as family heirlooms, which can include items such as colonial-era crockery, locks of hair traditionally grown by women for donation, and a wide range of medals and awards for monastic exams and other achievements, including sporting competitions and participation in blood-donation campaigns. One notable example is a golfing trophy won in a regional tournament in 1979. Comprising a golf club and ball mounted on plastic grass, it was clearly a source of pride for the donor. Materialistic associations aside, the true value of these gifts lies in the intention of the donor. Through their generosity (Pali: dana), a donor increases their store of hpon or “glory” associated with their actions. In this sense, the museum becomes an extension of the pagoda, offering an additional opportunity to make and share merit. The consecrated ground that it occupies within the pagoda means that circumambulations around the stupa often include the museum. Visitors usually pay their respects at a shrine to the five Buddhas of this era (including the future Buddha, Maitreya) as they arrive or leave. A shrine is often incorporated into pagoda museums, as rituals are performed on a daily basis and during festivals. Shrine room at the museum

However the notion of a museum as it is more widely understood means that it can also play a role in interpreting and representing cultural identity. For example, the collection in the Shwedagon Pagoda museum reflects the many ways in which donors from different social and cultural backgrounds have valued objects. Moreover, the significance of these objects can change over time. In this sense, the collection is an important record of changing sociopolitical circumstances. It remains to be seen how ongoing renovations of the museum’s displays might engage with these aspects in the future.

A system of pagoda management undertaken by a board of trustees operates across the country, and the work of looking after pagodas and pagoda museums is carried out with the help of volunteers. At the Shwedagon Pagoda, staff work with a small group of dedicated volunteer curators. The title “curator” acknowledges the range of museum activities that are undertaken by these volunteers to ensure the care of the museum’s objects (the term “curate” originates from the Latin curare or “to care for.”) Curating in the context of a Buddhist temple is also a merit-making activity—it sustains the sasana, defined by Turner as: “. . . the life of the Buddha’s teachings after he is gone . . . the condition of possibility for making merit and liberation.” (Turner 2004, 1) 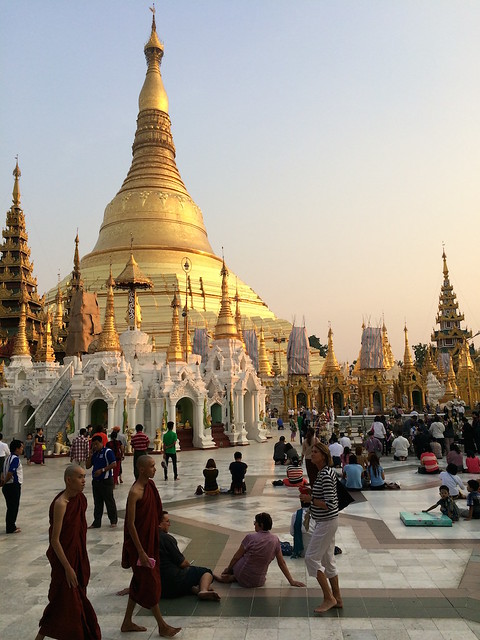 Although similar in many respects to the work of national museums, this form of local curating operates from within the Buddhist framework of merit-making. For some time, international scholars have identified local forms of curating as an important source of cultural knowledge. Curating as a cultural practice also constitutes a form of intangible cultural heritage that itself requires protecting. Myanmar’s increased openness to the world and the arrival of many new visitors to the country make it all the more imperative to recognize the value of such curating at pagoda museums as a meritorious practice.

The author would like to thank U Htun Aung Ngwe, head of the office of pagoda trustees, and his team of staff and volunteers for sharing their knowledge.