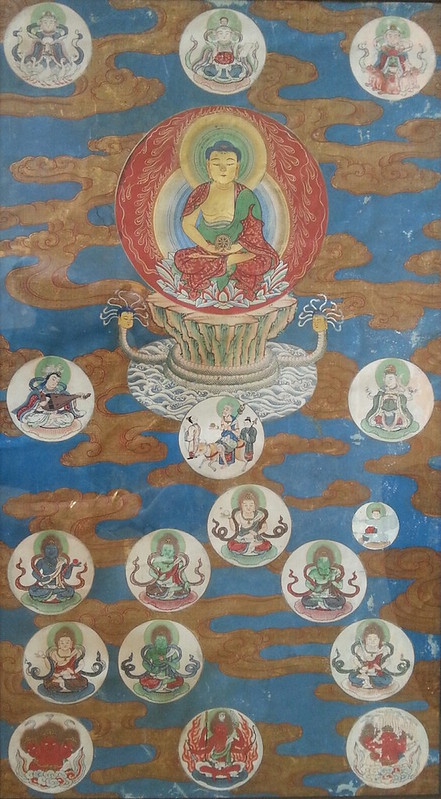 Japan’s esoteric Buddhist traditions boast a rich and diverse array of imagery, ranging from figures of individual deities to elaborate mandalas depicting specific deity families and their enlightened realms. Complex and often geometric, mandalas have played an integral role in the esoteric rituals of the Shingon and Tendai schools of Buddhism since the Heian period (794-1185). Both of these schools were founded by Japanese monks who traveled to China and brought back the mandala art form, as well as such Buddhist practices as mantras (sacred chants), mudras (hand gestures), meditation techniques, and elaborate ritual objects. Like the mandalas of the Himalayan Vajrayana tradition, Japanese mandalas typically feature a Buddha positioned in a central square or circle, framed by an entourage of bodhisattvas and other deities arranged hierarchically in layers of surrounding squares or circles.

One type of mandala that appears to be unique to Japan, however, is the Star Mandala (Japanese: Hoshi Mandara), created for use in both Shingon and Tendai rituals relating to stellar deities, which were also incorporated into the pantheons of these Buddhist schools. In these mandalas, the central Buddha figure is surrounded by squares or circles representing stars, within which are both peaceful and wrathful deities. Star worship never became a part of mainstream Buddhist practice in Japan, but these rare mandalas reveal an early Japanese integration of sophisticated astrological practices into Buddhist beliefs and art, created over several hundred years with tremendous artistry and precision. According to recent research into this type of mandala by Japanese scholar Tsuda Tetsuei of the National Institute of Cultural Properties in Tokyo, and explored in detail by independent American scholar Mark Schumacher, they first emerged in Japan during the Heian period. There were two main variations—a rectangular type created in the Shingon school and a circular type used by the Tendai school. The earliest extant examples of these date to the mid-to-late 12th century and are found, respectively, in Kumedadera Temple in Osaka and Horyu-ji, a temple in Nara. In both types, there is a Buddha figure located in the center, typically on a lotus base. In the section immediately surrounding the central Buddha are squares or circles containing deities representing the Nine Celestial Luminaries (the Sun, the Moon, five planets, and two mythical stellar phenomena) and the Seven Stars of the Big Dipper constellation. Surrounding this central section is a rectangle or circle containing the 12 signs of the zodiac, a grouping which in Asia represents the 12 yearly phases of the moon, similar to the Western zodiac, but not based on the specific constellations through which the sun passes. In the outer section are the 28 Lunar Mansions, or points that the moon passes through in its monthly phases, containing deities personifying these points. 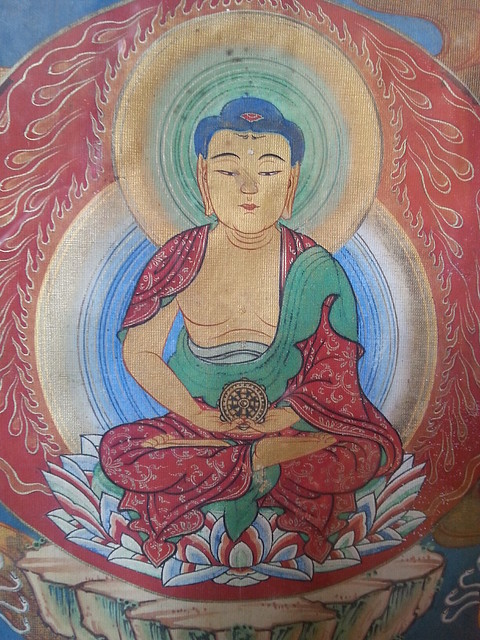 The Buddha figure at the center of these mandalas is typically shown seated in the lotus position, holding a golden wheel in his hands. According to Takeo Izumi of Kyoto National Museum, it is a depiction of the historical Buddha, Shakyamuni, known in Japanese as Ichiji Kinrin (literally, One Character, Golden Wheel), who is the ruler of the Star Realm. Although his figure anchors the mandala in Buddhist beliefs, Izumi argues that the rituals for which the mandala was created were focused more on the star deities around Shakyamuni Buddha in the center of the mandala, in particular the seven stars of the Big Dipper, depicted in a constellation adjacent to the Buddha as a group of seated deities with green, white, and blue skin, spikey hair, and stern expressions. These stellar deities were key figures in the astrological beliefs of the Japanese during the Heian period and served to determine one’s fortune. Whereas in Western astrology, people’s fate is supposed to be dictated by the zodiac sign under which they are born, the Japanese traditionally believed that their fate depends on which of the seven stars of the Big Dipper was ruling on the month and day of their birth. A devotee would then pray to that particular deity for protection and good fortune. 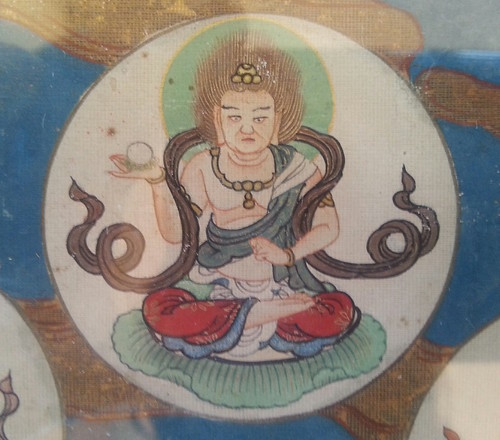 One of the seven deities of the Big Dipper, detail from Star Mandala, Japan, Edo
period (1603–1868). Ink, gold leaf, and pigments on silk; private collection.
Image courtesy of the collector

Although secondary to the seven Big Dipper deities, the Nine Luminaries often depicted around the edges of the central section were also significant in rituals associated with Star Mandalas. The iconography of these nine figures is particularly fascinating, deriving from earlier Chinese personification of stellar deities but also blending with Indian Hindu iconography. The Sun and the Moon, for example, are depicted as Chinese noble women riding five horses and five geese, respectively, animal vehicles providing them transport across the heavens and echoing the vahana or vehicles of Hindu deities. 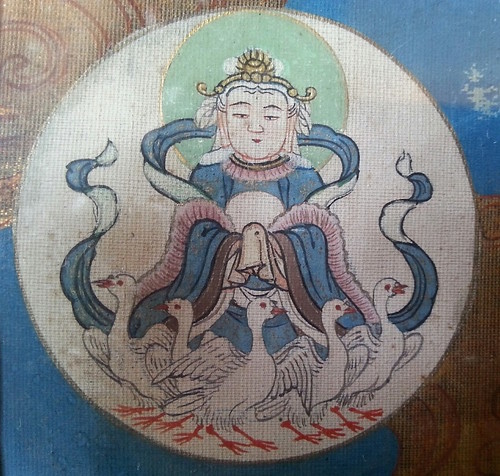 In East Asian astrology, the five main planets are associated with the five elements and the five directions, and, along with the Sun (northeast) and the Moon (northwest), they give their names to the days of the week: Mars associated with fire and south (Tuesday), Mercury with water and north (Wednesday), Jupiter with wood and east (Thursday), Venus with metal and west (Friday) and Saturn with earth and the center (Saturday). In the Star Mandala, they are also given human form. Most intriguingly, Saturn is depicted as wizened old man riding a bull, a representation that originates in China. The remaining two orbs figuring in this grouping represent Rago and Keitu, two deities who are not related to planets, but are depicted here as wrathful figures with multiple heads and are associated with extraordinary cosmic phenomena, Rago with eclipses and Keito with comets. In rituals associated with the Star Mandala, devotees prayed to these various personifications of the celestial bodies in the hope of preventing disasters and living long lives. As well as the central Buddha and stellar deities, the outer sections of the Star Mandala were also significant in fortune-telling rituals. The 12 orbs representing the 12 months and zodiac signs, as well as the 28 orbs representing the phases of the moon, were also important in providing greater precision to predictions of the fortunes of believers, and aiding in the selection of auspicious dates for official events and business dealings. All of the elements depicted in the Star Mandala continue to play a significant part in Japan’s divination traditions, and even today the dates of weddings, funerals, and other significant events is often decided based on consultations with experts in the astrological beliefs illustrated in this type of mandala. Although many printed books and other works have illustrated and diagrammed the astrological beliefs observed throughout Japan’s history, few represent the spiritual powers of the cosmos as exquisitely as Japan’s extraordinary Star Mandalas.