Left to right, Thrangu Rinpoche, His Holiness the Karmapa, and Dungsey Lama Pema. Image courtesy of the author

Growing up in the mist-filled highlands of Nepal, bordering Tibet, in the 1970s, Dungsey Lama Pema could not foresee that he would one day be entrusted with the task of constructing one of the first Tibetan Buddhist monasteries in Canada.

Thrangu Monastery, located in Richmond, British Columbia, lies just outside Vancouver, which is known for its large population of Asian immigrants. Since its inauguration in 2010, the monastery, built in the traditional Tibetan style, has become a major place of worship for local Buddhists and is perhaps the largest monastery of its kind in North America. Students attend meditation lessons, take classes in the Tibetan language, and receive initiations and empowerments from the resident as well as visiting monks and lamas. With the growth in the migration of Tibetans and Chinese to the West in recent years, there was clearly a need for such a place, not to mention the existing population of Western Buddhists. When Thrangu Rinpoche, one of the most senior lamas of the Kagyu school of Tibetan Buddhism, decided to build the monastery in 2004, he put Lama Pema—who had come to Canada as a resident teacher the previous year—in charge of the ambitious project.

It is not easy to build a monastery, especially in the West. Besides fundraising work and logistical co-ordination, there are strict architectural and aesthetic requirements for Tibetan monasteries.

“We tried our best to build it according to Tibetan tradition, but there were some areas where we had to compromise because of regulatory restrictions in Canada,” Lama Pema recalled.

The monastery now attracts students from all walks of life.

“Teachings generally are more popular with Western students, whereas initiations and empowerments tend to attract predominantly Tibetan and Chinese devotees,” he observed. Besides organizing visits by Thrangu Rinpoche, the monastery has hosted many high lamas, including two heads of Tibetan Buddhist schools, and has organized important puja ceremonies. Lama Pema considers the highlights to be receiving the Sakya Trizin, the head of Sakya school, at the monastery in 2011, and the 17th Karmapa, head of Kagyu school, in the summer of 2017.

Alongside his day-to-day managerial duties, Lama Pema keeps a busy schedule of travel, teachings, and non-profit work. He enjoys light banter and has a special appetite for news about local political developments. “I have heard of a saying that it is easy to build a monastery, but difficult to run it. Based on my experience, I found it to be 100 per cent true,” he noted. Lama Pema receiving an initiation. Image courtesy of the author

But he seems to manage his work well. Lama Pema’s easygoing and relaxed demeanor belie a strong commitment to the cause of the Dharma, and to his monastic vows and obligations. He takes deep pride in his spiritual heritage. “I was born in a very special place. Tsum is one of the four main pilgrimage sites of Guru Padmasambhava,” he said.

Lama Pema was born in 1972, the eldest son of Lama Pema Lapchen Rinpoche, who traces his family lineage to Ngak Labrang of the 13th century Nyingma Buddhist master Terton Guru Chowang, one of the great treasure revealers or tertons. The cover of Lama Pema’s new book. Image courtesy of the author

In 1981, at the age of nine, Lama Pema become a monk and enrolled at one of Thrangu Rinpoche’s monasteries in Kathmandu. In 2002, Rinpoche appointed him as a Vajra master, one of the highest posts among the monastery’s khenpos, retreat masters, staff, and monks. Becoming a monk is a departure from his family tradition of lay practice, but Lama Pema is very happy with his status as a hermit. And he considers himself lucky to have found his guru Thrangu Rinpoche.

I first met Lama Pema in Bodh Gaya, India, nearly 10 years ago during a Kagyu Monlam festival while I was working on a book. Over the past decade, I met him again in New York, and three years ago in Hong Kong, where he was coordinating a massive relief effort in the aftermath of the earthquake in Nepal, helping to co-ordinate emergency supplies for his hometown of Tsum.

Most recently, I saw him in Hong Kong in May, when I realized that he had added one more feather to his cap: that of an author. He gave me a copy of a book that he had recently published, Making Friends Out of Enemies. It is a compilation of a long teaching he gave at another major monastery in North America, the Karma Triyana Dharma Chakra Center in Woodstock, New York. The Chinese language edition has done well, he told me, with nearly 1,500 copies already sold.

I asked about his future plans and his response was simple: “As of now, I’m trying my best to serve the Dharma and will continue to do so, because for Buddhism to survive it is critical to have a monastic community.”

That he put together a Tibetan monastery in North America in two-and-a-half years from scratch says a lot about his management and leadership skills. In fact, Lama Pema refers to himself, in a nod to corporate-speak, as the chief operating officer (COO) of the monastery. Given his multi-tasking ability, it almost feels that if Lama Pema were not a Buddhist monk, he would certainly be a high-level business executive presiding over a large modern corporation. 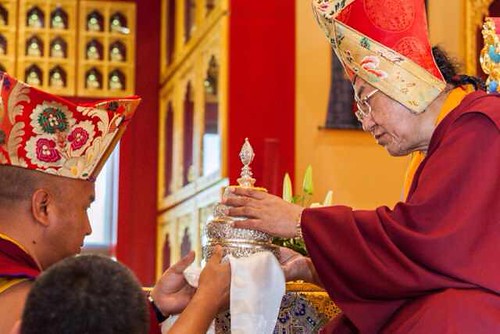 Lama Pema offering a mandala to His Holiness the Sakya Trizin in 2011. Image
courtesy of the author

Demystifying the Yoga of Bliss: An Interview with Dr. Nida Chenagtsang, Part One
Lost in Translation
Everyone with a Cow Owes Me a Favor – Dancing, Healing, and Spiritual Realization, Part One