Borobudur during Vesak 2016. From thecultureist.com

There are many exciting aspects to Chinese president Xi Jinping’s ambitious development framework known as “One Belt, One Road” (OBOR).* A Eurasian economic resurgence could see prosperity being shared from Xi’an and Urumqi all the way to Belarus, Rotterdam, and Venice—and in the opposite direction. A 21st century Silk Road could create new opportunities in banking and finance, led by the Silk Road Infrastructure Fund, the Asian Infrastructure Investment Bank (AIIB), and the New Development Bank (a multilateral development bank established in July 2014 by Brazil, Russia, India, China, and South Africa [BRICS]). The initiative also has massive implications for Eurasian collaboration on transportation, security, trade, infrastructure, and energy and natural resources.

In an international seminar on BRICS held at Fudan University in Shanghai from 20–21 April this year, academics Wei Wang and Xavier Richet eloquently summed up China’s grand project: “The ‘One Belt and One Road’ vision is not only a strategic conception for the great rejuvenation of the Chinese nation, but also a beneficial path for the common prosperity of countries along the proposed route and an organic combination of the Chinese dream with the global dream.” (Powerpoint file) From a Buddhist perspective, the most intriguing prospect is that of a renaissance of Buddhist exchange and dialogue across Eurasia based on the principles of OBOR: mutual trust, mutual benefits, mutual learning, and inclusiveness.

How can the international Buddhist community participate in this vision, and what could be accomplished? News website VTibet.com reported on 4 June 2015 that Ven. Xue Cheng, a member of the Chinese People’s Political Consultative Conference (CPPCC) and the youngest monastic ever to become president of the Buddhist Association of China (he rose to the position in 2015, having been secretary general since 2007), had suggested at the Boao Forum for 2015 Asia Annual Conference (8–11 April 2015) that Buddhism could lay the foundation for mutually beneficial economic relations and ethnic harmony by promoting religious co-existence and non-violent communication. He reiterated similar remarks at the Fourth World Buddhist Forum in Wuxi in October 2015, telling CCTV: “The forefathers say that if there is learning without exchange of ideas, knowledge will lead to narrow and short-sighted experiences. Whatever our school of belief or nationality, we need to exchange with trust, learn from others’ strong points, and seek win-win development through cooperation.” (CCTV) 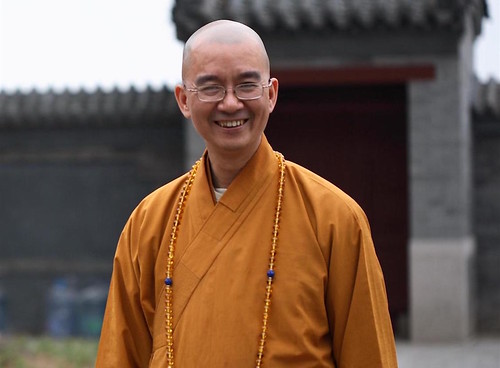 In a similar vein, Ven. Yin Shun, vice chairman of the Buddhist Association of China, claims in his profile for the Boao Forum that his “South China Sea Strategy”—an approach to dialogue between Mahayana and Theravada Buddhists in the region, building friendships with Buddhist leaders in Thailand, Nepal, and Cambodia, and performing charity work in Southeast Asian countries—is a manifestation of the spirit of OBOR. Ven. Jue Xing, another member of the CPPCC and vice president of the Buddhist Association of China, has echoed Ven. Yin Shun’s point about dialogue, arguing that the role of Buddhism in the Maritime Silk Road (the littoral component of OBOR) possesses “an indispensible significance for interaction with South and Southeast Asian countries.” (VTibet.com)

The nature of OBOR is nebulous. It is not so much an economic or political initiative as a collection of projects and policies invoking the values that the Silk Road embodies, such as diversity, mutual benefit, and tolerance. What we can glean from the thoughts of these senior Chinese monks is that dialogue is a core component in facilitating OBOR, and will be distinguished by two prime directives or ethical anchors: conversation over conversion, and unity of purpose. Indeed, the Buddhist project within an OBOR context must be defined by mutuality.

Take Vesak, the festival held to celebrate the Buddha’s birth, enlightenment, first teaching, and parinirvana. Traditionally, this is a regional celebration, with few opportunities for Buddhist dialogue and inter-school activity. Buddhist countries have traditionally celebrated Vesak locally: for example, the Thai sangha will have a large official festival in Bangkok, and the Jogye Order in Korea will convene a central event in Seoul. Generally speaking, even the biggest Vesak festivals in Asia do not involve different countries in their celebrations. An extreme example is the most recent boycott of the Vesak festival in Nepal by India. Both nations lay claim to being the center of the Buddhist world.

This is what makes the recent collaboration between Sri Lanka and Pakistan so extraordinary and encouraging: Pakistan celebrated Vesak for the first time at an official level in Islamabad on 30 May this year, and the event was attended by a delegation of Sri Lankan monks.** Pakistan’s objective was to introduce its rich pre-Islamic Buddhist history to Sri Lankans, and particularly the kingdom of Gandhara.*** Our website also reported that Pakistan loaned sacred bone relics of the Buddha to Sri Lanka, which were placed on public display in a series of exhibitions at temples across the country during Vesak.**** This is one of the most concrete and laudable examples of Buddhist heritage education and dialogue between two OBOR-involved countries.

The precedent set by Sri Lanka and Pakistan should encourage policymakers working on OBOR to “think big” and explore how festivals such as Vesak could function as more interconnected celebrations. If there were to be a similar cultural exchange between Sri Lanka and Japan, monks could visit Tokyo for Vesak in Japan while Japanese masters go to Colombo. Festivals across Asia have the potential to be much more ambitious in highlighting Buddhist heritage through inter-school conferences, symposia, and celebrations. They could be used as springboards to inter-tradition dialogue, meetings, and networking. Monastics from Mongolia, Russia, or elsewhere could give talks in Beijing in celebration of the Buddha’s teachings during certain Chinese celebrations. The key, again, is mutuality. For instance, if Chinese Mahayana monks are to be present at Theravada festivals and conferences, corresponding numbers of Theravada monastics should be invited to attend events held in China. Outline of the geographical trajectory of One Belt, One Road. From wsj.com

Cultural revival should become a critical component of OBOR, as much of Eurasia’s cultural life was decimated after World War II. China and Russia both suffered through wholesale cultural destruction during Stalin’s purges and Mao’s Cultural Revolution. With both now promoting a return to tradition, there is scope for a general revival of awareness regarding Buddhist heritage across the OBOR world. Governments across Asia, including in India and Pakistan, are recognizing that tourism and pilgrimage can cultivate a sense of national pride and regional history.

Dr. Victor Wee, chairman of the Malaysia Tourism Promotion Board, is setting an excellent example by organizing a Silk Road tour this fall that will trace the journey of the Chinese pilgrim Xuanzang (602–64) through what are now Kyrgyzstan and Uzbekistan (last year, Dr. Wee and his group traveled from Xi’an to Turfan through the Hexi Corridor and the Gobi and Taklamakan deserts, staying in oasis towns before reaching the Heavenly Lake at Urumqi). There are great opportunities for cultural education and tourism to grow from such activities and initiatives, not least in the potential for jobs as tour guides and drivers, investment in tourism infrastructure, and even security services. Competition in this sector could also generate incentives for firms to provide better services and attract greater investment.

Infrastructure and financing pose important logistical questions. There are legitimate concerns about safe travel and investment in countries such as Kazakhstan or Tajikistan, not to mention the ongoing conflicts in the Middle East. It will be up to governments, businesses, and academic and Buddhist institutions to work together to nurture the latent potential in the OBOR vision. The Buddhist voice is critical. Without proactive Buddhist participation and input, even the most modest proposals will remain ideas. Rather, we hope that our ideas, be they grand or modest, will flourish along the 21st century Silk Road.