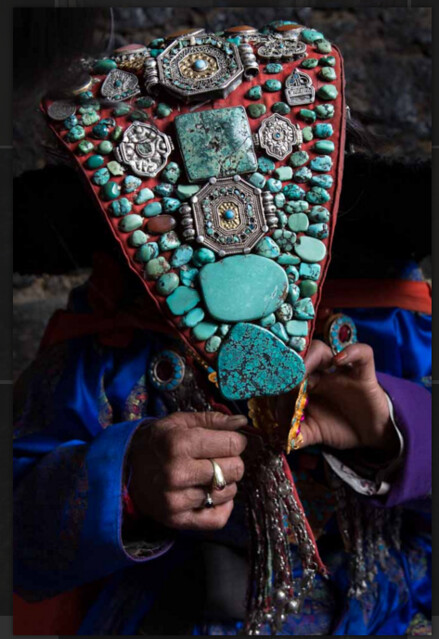 It is a choice to remember life in beautiful ways. Dance is an art made of life itself. The human body as medium contains within it every aspect of humanity. The body by becoming a symbol of meaning can probe deep levels of experience, and speak universally. It takes on style, shape, and decoration; it carries tradition, contemporary interpretation, and the ability to transform consciousness.

When dance begins to disappear, to die out, something of the life of a culture dies too: its communal ritual expression, its relation to the environment, its upholding of spiritual values. How do the values and qualities of disappearing dance come to be saved for future transmission and ongoing understanding?

The organization I direct, Core of Culture (CoC), looks at actual dance practice, and works with locals to bolster it. CoC makes scientific documentation of ancient dances, showing their structure and choreography. We seek pristine conditions. The apex of that work is a 500-hour archive of Bhutanese Buddhist dance, maintained by the Dance Division of the New York Public Library for the Performing Arts.*

In years past, explorers took photographs and made films that included dance. They may not have been dance or film specialists, but they recognized the significance of dance to a culture and often sought to record it, showing the amplitude of its social and religious context, and often, to their eyes, its oddity.

The following three images are by the celebrated Swedish adventurer Sven Hedin (1865–1952), who made four expeditions into Central Asia around the turn of the last century. He was a considerable artist and a reliable photographer. The first, a drawing, shows his keen interest in context and accuracy. It depicts the array of monks having tea in the ceremonial courtyard of Tashilhunpo Monastery. Lamas drinking Tea in the Court of Ceremonies in Tashi-Lunpo, by Sven Hedin. Pencil drawing. After Trans-Himalaya, Discoveries and Adventures in Tibet, Vol. 1, 1909, The Macmillan Company, New York, fig. 143

The second, a photograph, shows a group of Ladakhi women from the village of Chusut performing dances in a stony courtyard. The clothing, setting, and movement are all true in an anthropological sense. It is ethnographic documentation. In the third, a set of four women, Hedin chooses to remove them from the context of place and ceremony and to record aspects of the adorned women, isolated, specific to a realistic watercolor sketch. The women and their finery are appreciated entirely alone, for themselves as objects of study. 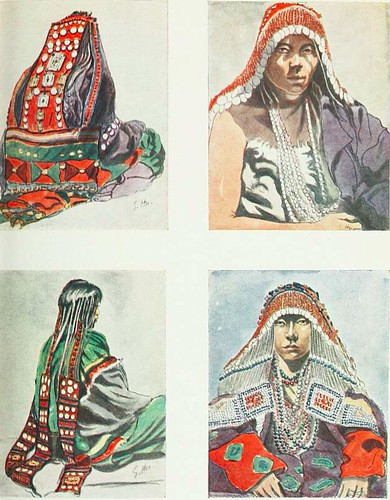 More recently, Dutch explorer and photographer Peter Bos has made a mission for himself in midlife, to leave his occupation as a businessman and travel to places where culture is disappearing. Peter Bos is an artist. His photography is being shown from 21 March at the National Museum of Humankind in Bhopal, India. A book of his photographs, Last of the Tattooed Headhunters: The Konyaks, with text by Phejin Konyak, is being optioned by several publishers. Bos sees beauty in what he photographs, a kind of eternal presence transcending time. More than that, at the same time, the photographs—of single people in isolation—express fragility. Transmission cannot happen with one person.

What Bos preserves is not choreographic or anthropological context. Bos preserves what is sublime in its peculiarity; what appears to be from a former time, standing out with nobility in our own. In this he is heir to the exquisite style of American ethnographer Edward Sheriff Curtis (1868–1952), whose photographs of North American first peoples remain some of the most compelling documentation of a great civilization.

These photographs are a type of studio portraiture, raising every problematic issue with both studio styled artists and the genre of portraiture, in the face of a different culture. (Full disclosure: I much admire studio artists and portraiture.) Bos’s “disappearing portraits” are works of great beauty, and for that alone, they will last. 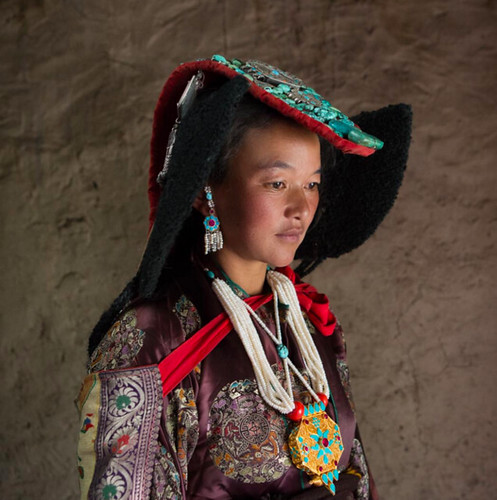 Young Ladakhi Woman in Ceremonial Dress, by Peter Bos. Photograph. 2015.
This is the attire worn to Buddhist ceremonies, when greeting high lamas, and
for dancing. It is similar to that in the Hedin photograph above, where the
Ladakhi women are also wearing capes.

Bos attains some comprehension of performance by also photographing the handsome Brogpa hill people, a tribe, neither Ladakhi nor Kashmiri, reputed to be descended from Aryans. The Brogpa speak their own language. They are known for their incredible jewelry and extraordinary floral headdresses.

The photograph below shows their ceremonial attire for Harvest Festival dances as well as for dances they perform at Buddhist Cham festivals, such as at Lamayuru Monastery in Ladakh. The Brogpa walk many miles over the high Fotu-la Pass in order to attend. A weeping transvestite oracle in a trance accompanies them and stays the entire three days of the Buddhist Cham ritual. The Brogpa dance on the final day. This integration of local customs around the Buddhist celebrations is common, indeed a characteristic of Buddhist festivals, ancient and modern. 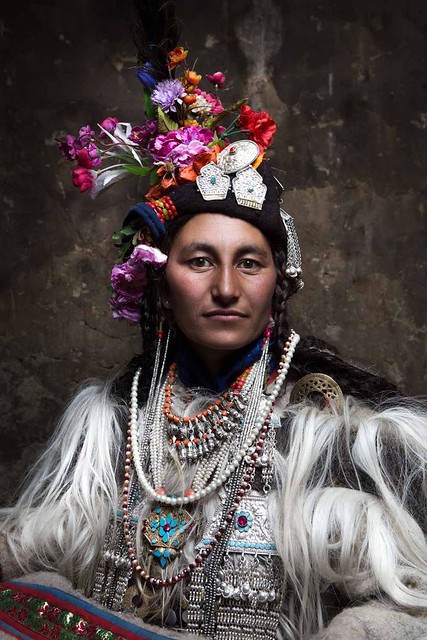 Memory becomes further abstracted and objectified in the amazing exhibition of jewelry from the Himalaya and Central Asia, Vanishing Beauty, at the Art Institute of Chicago from 19 June this year. The exhibition is curated by one of the world’s foremost specialists in Asian art, Madhuvanti Ghose, Alsdorf Associate Curator of Indian, Southeast Asian, Himalayan, and Islamic Art at the Art Institute. Her broad and detailed knowledge finds apt engagement in the wide-ranging geographical extent of the collection. Similarly wide-ranging are the functions the items of jewelry carry out.

Collector Barbara Kipper is a rare bird. She has traveled to India more than ten times and Africa more than twenty times, and made an overland expedition to Afghanistan from London in 1968. Mrs. Kipper has visited nearly every Buddhist culture in Asia. She is also a devoted patron of classical ballet, and knows dancing very well.

Mrs. Kipper brings two qualities that may or may not arise on an expeditionary trip: a collector’s eye and discriminating taste. Her collection of Himalayan and Central Asian jewelry is among the very best and largest in the world.

She is giving part of this collection to the Art Institute of Chicago in order to fulfill her sense of cultural duty by finding a home for these “orphaned” pieces, where their qualities can be admired and understood, even as the silversmiths and Oracles are dying out. Many pieces of jewelry in her collection are intended for dance performances, sacred, social, and martial. The exhibition will show pieces of jewelry such as those seen in the photographs here of Ladakhi and Brogpa people by Peter Bos.

What secrets can jewelry reveal? What ongoing power does the object have for citizens of the world for whom the religion and the ritual are remote, and the dance steps inconceivable? As a study in contrasts, consider the Newar ritual crown from the Kipper collection along with a photograph of a Tantric priest-dancer wearing a similar crown. Both illuminate: the dance with a sense of rarity; the museum object with an echo of impending loss. Consider the jewelry in the photographs by Peter Bos . . . with no women to wear it, no dance to perform. 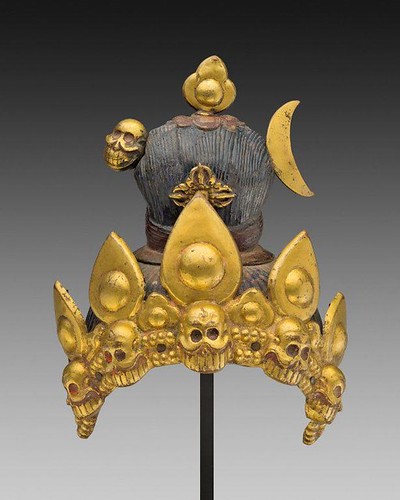 Buddhist Oracles are dancers in a trance, the dance performed by selected monks and sometimes, by high lamas. They wield swords, cut their tongues, and run rapidly along the edge of the monastery roof wearing a blindfold. They show their power; they make prophecy based on their performed experience. One powerful object in the Kipper collection is an Oracle’s breastplate, a mirror of the Mind. Let’s look into it. 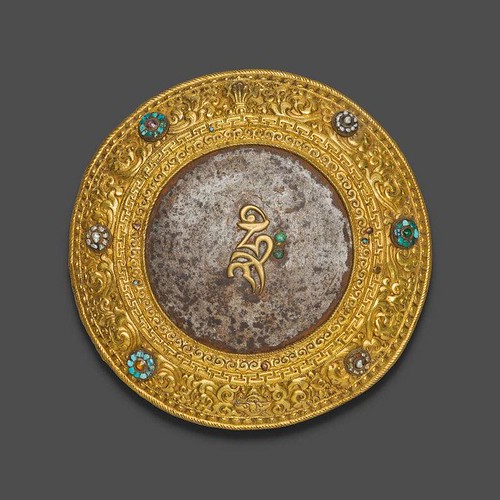 Who was that Oracle? What was his dance like? How did he get into a trance? How are Oracles selected? Mrs. Kipper’s idea in giving her collection to the public through museums is that these objects—isolated, abstracted, and ensconced in the aesthetic appreciation of beauty—can become doorways, touchstones, beginnings of a way to go back, to make whole, to complete ourselves with the exploration of disappearing human excellence, what civilizational memory manages to hold. The context of beauty for our memories is one of respect, and signals another vessel for the transmission of what remains.

This column is dedicated to the beautiful memory of my father, William Houseal.