Home » Features » Film, Books, Music, and Poetry » An Interview with Ella Manzheeva, Director of the New Documentary Geshe Wangyal: With Blessing of the Three Jewels

Geshe Ngawang Wangyal (1901–83), sometimes known as “America’s first lama,” was a Buddhist monk and scholar born in Astrakhan Province of the Russian Republic of Kalmykia. He left his home in 1923 and spent more than 30 years in Tibet and India. In 1955, Geshe Wangyal traveled to the United States, where he spent rest of his life as a key figure in the spread of Buddhism in the West. He opened the first Tibetan Dharma center in the West, trained the first generation of Tibetan Buddhist scholars in the US, and taught at Columbia University. He was a close friend of His Holiness the Dalai Lama and helped to develop the code for the CIA that aided the Dalai Lama’s departure from Tibet.

Geshe Wangyal: With Blessing of the Three Jewels, which premiered on 16 November at the Asian World Film Festival in Los Angeles, is a newly released documentary about his life. It was written, directed, and produced by Ella Manzheeva, the first film director from Kalmykia, co-produced by Victoria Lupik and Zayana Pompaeva, with Ekaterina Orlovskaya as the director of photography.

With a dynamic script, professional cinematography, and a beautifully meditative music score composed by Anton Silaev, the documentary presents the dramatic story of the incredible worldly and spiritual journey of Geshe Wangyal. The film is a historical document of an essential episode in the modern history of Tibetan Buddhism, of the spiritual and political connections between Tibet, India, Russia, and the US, and of the dissemination of Buddhism in the West thanks to the efforts of a great teacher who planted karmic seeds in the hearts of his disciples and in his homeland Kalmykia. The film also features His Holiness the Dalai Lama, Telo Tulku Rinpoche, Robert Thurman, Jeffry Hopkins, Joe McClearly, Joshua and Diana Cutler, and many others figures from the Buddhist world.

Buddhistdoor Global had the privilege of interviewing Ella Manzheeva on the day of her film’s premier.

Buddhistdoor Global: Hello Ella, and thank you for sharing your time with us! Can you tell us a little about who Geshe Wangyal is in the eyes of a young Kalmyk woman?

Ella Manzheeva: In Kalmykia, the name Geshe Wangyal is unfortunately not so familiar. If you ask who Geshe Wangyal is for me, I can say that from working on this film and communicating with him through his students, he is of course a teacher for me. I never considered this film a movie project: I am a Buddhist and this was my practice.

I went through a lot of personal transformations during the making of this film. I learned a lot about myself. Geshe Wangyal’s life is so vast and so inspiring that it can never fit into one film. I hope that somehow I was able to follow an important thread from his life—what he dedicated his life to, where his inspiration came from, and in what he strongly believed. Probably this movie is about that.

BDG: How did the idea of ​​making this film first come about?

EM: It happened by chance. A person contacted me out of the blue and opened the door by asking if I wanted to make a film about Geshe Wangyal. Of course, I said no. This is a very complicated subject, one can see just from reading Geshe’s biography on Wikipedia, As a director I know perfectly well how everything works, and so of course I refused. After the meeting I began reading more about Geshe Wangyal. I couldn’t stop. From morning to evening, I read about him constantly through books I found that were connected with his name. A week later I called this person back and said that I wanted to talk about this topic again.

This documentary was originally conceived as a feature film. The documentary that the audience will see now was filmed for the purpose of research in order to write a full-length script on a topic about Geshe Wangyal’s life. That was the idea. No one knew that it would take so long; it’s been five years! And now there may be no need to make a feature film. I didn’t know if I was ready for that, but I managed to get some unique interviews. Each and every person with whom Geshe Wangyal was connected and who participated in the film could have a movie made about them! Each of these people has a unique story. Of course, this was difficult for me because I wanted to tell their stories as well, especially His Holiness the Dalai Lama.

The biggest challenge was to make sure that this did not turn into a film about His Holiness. It was very difficult to find a balance and find places for His Holiness to be included in the same timeline with the names of the other respectable people. And, at the same time, he should not be the main protagonist because that is Geshe Wangyal. There were earlier cuts in which everyone said that this was a film about the Dalai Lama, so it was difficult for me as a director to find a balance. This was not my character with whom I could do anything or edit the film as I pleased. Deciding not to edit anything, but to just follow Geshe’s life was very difficult. I deliberately made this film as an offering. It’s not my film; I’m a different person as a director and this is my small offering.

BDG: What was the working atmosphere like among this mostly female production team?

EM: The film was made by women, that’s true. The director of photography, the producer, and co-producers were also women, as well as me. I didn’t deliberately choose women; it happened naturally. But it was probably very convenient because, first of all, there was a sense of mutual understanding between us, and second, it was technically very convenient. During the whole four months that we were shooting with the director of photography, we practically lived together 24 hours a day. We spent a month in India and a month in the US. I flew to Hong Kong to meet Gyalo Thondup, His Holiness’s brother, and we were in Kalmykia. We received help from the Kalmyk diaspora in New Jersey, South Carolina, and California. We did not travel to Tibet, but one man filmed in Tibet specifically for this film.

BDG: How do you feel today, on the day of the premiere?

EM: I am very happy. Today is a special day. When you have spent a long time making something, it feels like your are pregnant—you carry the project with you over months and years. And now it finally feels like it’s coming true. I’m very glad that today, for the first time, I will share the film with people and it will begin its own life. What people will say, whether they will like it or not, is not really my concern and not my responsibility.

With the premiere today, I am finishing this story. I am very happy that the film will be shown for the first time in the US because this is an American story. There is not a single word in Russian. Of course, it’s very important for me to show the film in Kalmykia because very few Kalmyks know who Geshe Wangyal was. In my opinion, he is the greatest Kalmyk of the last 2,000 years. This is only my opinion, but I do not know of any other Kalmyk in history whose destiny led them to participate in the geopolitical landscape of the world, in part by chance, but also not by chance because of the incredible things Geshe Wangyal has done.

I know that this film raises a lot of questions because it is a teaser for an exploration of the whole body of Tibetan Buddhism as it developed in the 20th century, and how difficult the circumstances were after the Chinese invasion of Tibet. So this is effectively a teaser for a much larger story that cannot be told in a 90-minute documentary.

BDG: Where we can trace the results of Geshe Wangyal’s contribution?

When we requested an interview from the Dalai Lama’s secretary, the man who was supposed to give us permission said that when we finished the film and had conducted all of the interviews, then they would give us an audience. He said that the Tibetan people would never forget what Geshe Wangyal did for them. I was surprised that the Dalai Lama’s secretary already knew about Geshe Wangyal’s contribution, and I asked him why he thought like that. It turned out that as soon as His Holiness arrived in the US for the first time, at that moment all the mass media turned its attention to Tibet. Until then, only Taiwan was in focus. The situation in Tibet was scary and the attention of the international media helped to save the lives of many ordinary people.

BDG: What is the most important message of the film?

EM: The most important thing that audiences can see in this movie is Geshe’s spiritual success. If they understand Geshe Wangyal’s path, it will be a very helpful example for everyone. Geshe Wangyal once said: “Keep your motivation pure. It helps you to achieve great things.” And this is true. If something is going wrong, it means something is wrong with your motivation. There’s no need to make a big fuss to solve this problem—just sit down, meditate, and try to purify your motivation. You don’t need to go outside, but you do need to meet your ego. This is the key. If people can understand this, they will really become happier. I think this is very important.

BDG: Thank you very much, Ella. We wish a great success for this film!

Where Mountains Fly: A Shugendo Documentary, Part 1
Film Review: Khyentse Norbu’s Looking for a Lady with Fangs and a Moustache
Sing Me A Song: The Impact of Screens on a Remote Bhutanese Mountain Village
Talking about a Revolution: Victoria Knobloch on Manifesting Change in a Changing World
Precious Guru: Tracing the Wild and Sacred Legacy of Padmasambhava 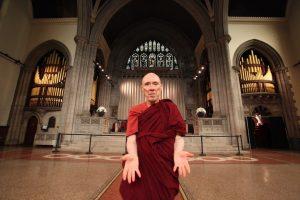 Wonderfool! But it’s strange that the first, pioneering documentary on Geshe Wangyal done in Kalmykia by Irina Dolgina some years ago (see https://www.kalmykiatour.com/2018/3-fevralya-prezentaciya-filma-kalmyckij-geshe-ngavang-vangyal/) is not mentioned here at all. It was made in Russian language and was much appreciated in Kalmykia.