Celebrated Tibetan artist Pema Namdol Thaye has spent much of his career depicting Buddhist deities and their sacred realms in vividly detailed thangka paintings and two- and three-dimensional mandalas that connect practitioners with the energies and sacred realms of enlightened beings.* As one of today’s leading Tibetan Buddhist artists, Thaye follows in the footsteps of generations of Buddhist artists before him who have for centuries created work that is not only aesthetically rich and spiritually uplifting, but also didactic, offering visual representations of profound Buddhist teachings.

In many Buddhist cultures, these artists have also depicted the horrors of the Buddhist hell realms into which a soul can be reborn. These gory and terrifying images serve to remind practitioners of the consequences of bad karma and encourage virtuous behavior and attitudes. Thaye recently completed a series of images of hell for a graphic novel written by Samuel Bercholz, Buddhist teacher and founder of Shambhala Publications. Published in late 2016 and the subject of an exhibition at the Asian Art Museum in San Francisco that runs until 16 September, the graphic novel, A Guided Tour of Hell, is an ambitious and fascinating project that not only showcases Thaye’s talents as an artist but also represents a powerful contemporary delivery medium for timeless Buddhist lessons. 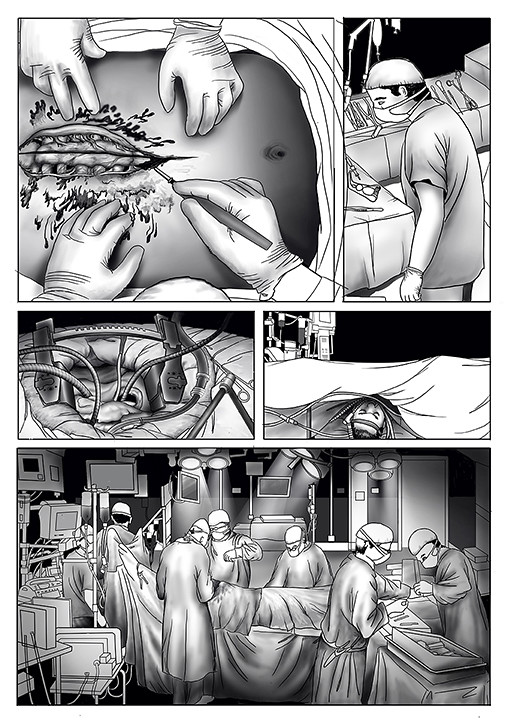 The idea for the graphic novel was born out of the near-death experience of Sam Bercholz, a long-time Buddhist practitioner and teacher. Several years ago, Bercholz underwent a sextuple coronary bypass, and during his recuperation suffered a severe blood infection and collapsed in hospital. While unconscious, he felt himself being pulled violently down into a realm beyond life where he witnessed intense suffering in terrifying landscapes, but was ultimately able to find his way back with the help of blessed beings. After discussing this experience with Tibetan Buddhist teachers, Bercholz decided to share his near-death experience of hell with others in the form of a graphic novel, approaching Thaye as a possible illustrator. Bercholz’s wife remembered the Tibetan artist telling them that he had an interest in comic book art. Thaye had grown up a Tibetan refugee in India and Bhutan, and as a child had spent years drawing characters and scenes from comic books. Impressed by his skill in rendering such characters, his uncle began training him from the age of 13 in the geometry, symbolism, and iconography of Tibetan thangka painting.

Thaye was immediately excited by Bercholz’s project and within a year had produced all the black-and-white drawings for the first and third parts of the book—images that evocatively set the scene for Bercholz’s extraordinary experience. He then went on to create a series of full-color acrylic paintings that painstakingly depict the journey through hell that Bercholz had recounted to him. He and Thaye spent much time together, with Bercholz searching to find the words to properly express his experiences, and Thaye in turn finding a visual language to depict them. “First drafts were produced,” Bercholz explains in the book’s introduction, “through Pema’s exacting artistic capabilities, his natural grasp of the subject matter, and his seeming ability to mind-meld with me.” 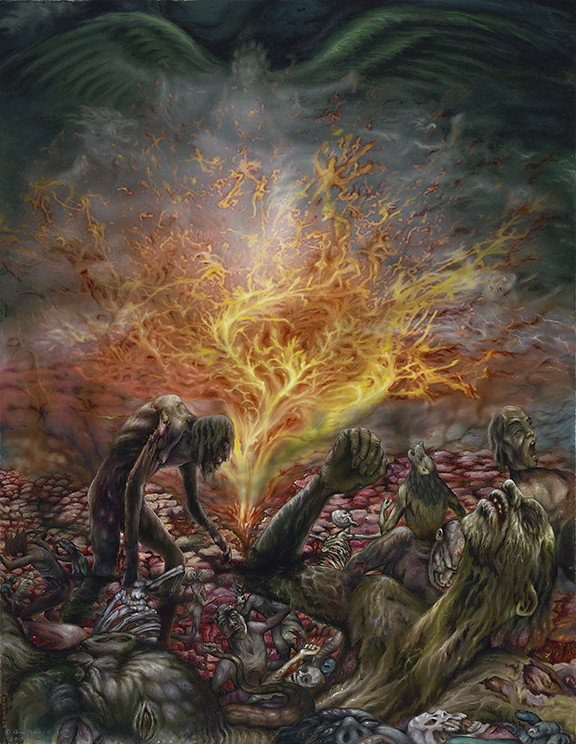 The resulting images are spectacular, not only in the exquisite rendering of flames, ice, and waves that make up the various hellish landscapes, but also in the intensity of the horrors they depict. In one image, The Gates of Hell, humans and fantastic creatures are shown tumbling downward through a blood-red tunnel that could be the digestive tract of a giant beast or a tunnel descending into the depths of the Earth. The rich layering of red pigment, the cloud-like treatment of the tunnel walls, and the writhing motion of the bodies make this an image that is at once beautiful and terrifying. In another painting, Momo Drollo, the figure of a large human male is composed of writhing people with pained facial expressions and in various states of transformation into snake-like beings. The image is undeniably grotesque, but Thaye’s texturing of the icicles forming on his arms, the cloud of frozen breath issuing from his mouth, and the Aurora Borealis-like sky above him are masterfully rendered and not without beauty. Similarly, in the painting Inferno, the agony on the faces of the suffering is countered by the delicately detailed treatment of the flames rising up around them. 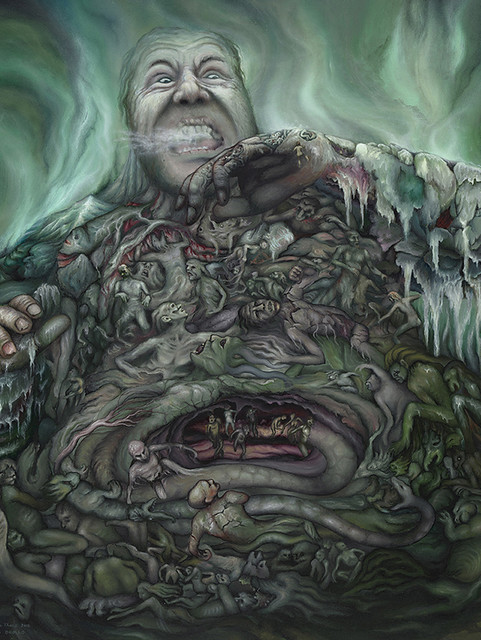 According to Thaye, the color paintings in the book, which are also the focal point of the exhibition at the Asian Art Museum, focus on the hot and cold hells of the Buddhist teachings. “As a starting point,” Thaye explains, “I referred to Words of My Perfect Teacher, a famous commentary written in the mid-19th century by the enlightened master Patrul Rinpoche, along with oral teachings on bardo (the intermediate state between death and rebirth) given to me when I was 14 years old by my lama uncle, the Venerable Tsarak Gonpo Tenzing Rinpoche. On this basis, I created images with my own imagination, reflecting impressions of suffering in the modern world.” 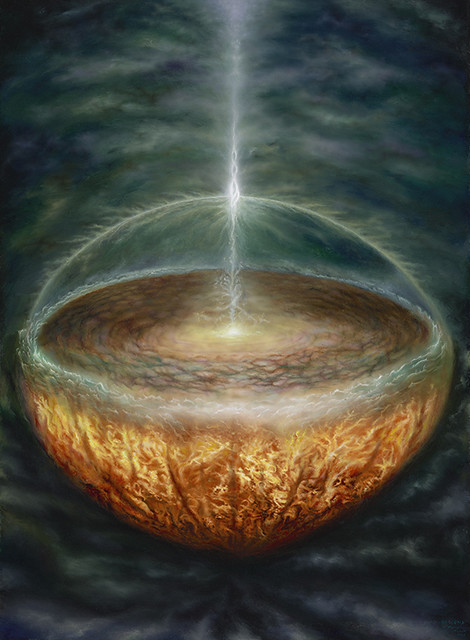 The book and the exhibition are not for the faint of heart. They depict in meticulous detail the many gory, painful, and heartbreaking horrors Bercholz witnessed in his journey through hell—all in keeping with Buddhist teachings about the suffering of the hell realm. However, the objective of Bercholz’s text and Thaye’s imagery—like Buddhist teachings through the ages—is not to scare or depress the viewer. Instead, the book is intended to create an awareness of the inevitability of death and to inspire in the viewer toward a deeper inquiry into the meaning of life and the consequences of negative action.

“Contemplation of hell realms and life after death is meant to inspire one to greater good,” adds Thaye. “And it is with such an intention that I set about these paintings.” Bercholz’s sharing of his extraordinary story and the love and care with which Thaye illustrated it are the kindest of offerings, encouraging readers and museum-goers to be more mindful about how we live our lives.