Just 45 minutes outside of Perth, the state capital of Western Australia, lies a sprawling acreage of dry forest. Fires can scorch the forest in bushfire season, but the 14 women of Dhammsara Nuns Monastery have learned to live on the land, devoting themselves to a life that is purposefully removed from the busy distractions of the city.

Their abbot is Venerable Hāsapañña, one of the first modern women to be ordained in the Theravada tradition. She was ordained in 2009 in a controversial ceremony that included Venerable Ayya Tathaaloka as preceptor.*

Now a respected teacher in her own right, Venerable Hāsapañña oversees the daily administration of Dhammasara Nuns Monastery. For a woman who sought only “solitude and seclusion in the forest,” she has kept busy. In addition to running the monastery, she provides services to the lay community, teaches novices, cultivates her own practice, and works on the land. “When I first became a nun, my original thoughts were that I was going into solitude and seclusion. Little did I ever imagine I would be running the building project, training nuns, teaching, and administering a monastery!” she wrote in our email exchanges. Despite the many organisational duties, she never forgets what she calls the “essence of nun’s training—to investigate, understand, and eventually purify one’s mind.”

Born in Ipoh, Malaysia, to a Buddhist family, Venerable Hāsapañña had an early introduction to Buddhism. She attended occasional Dharma talks, visited the local temple, and kept the Five Precepts as a child. “Although I was exposed to these Buddhist elements, I was not actively engaged in the practice,” she told me. 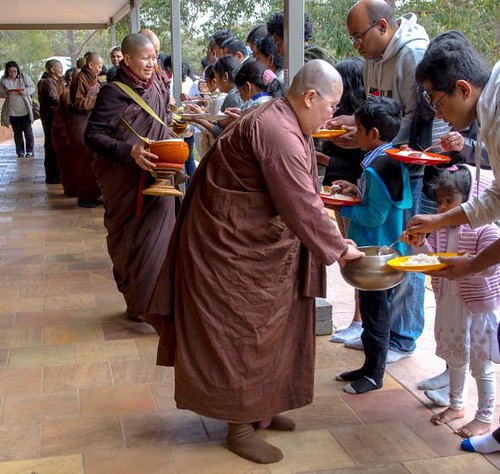 The death of her mother, later in life, spurred her to investigate Buddhism more seriously. Although she didn’t at first have any ambition toward monastic life, she enjoyed the quiet and solitude of the forest monastery environments she visited. Eventually she gained the “courage and aspiration” to become a renunciate and, at the urging of Theravada teacher Ajahn Sujato, sought out Dhammasara.

Dhammasara Nuns Monastery is part of the Buddhist Society of Western Australia. Established in 1998, it aims “to give women the same opportunity to train in the Buddha’s teachings and Monastic discipline” as their male counterparts. Build on 600 acres (243 hectares) of land, it includes a meditation hall, dining hall, kitchen, library, and accommodation for monastics and lay visitors.

But in 2002, when Venerable Hāsapañña became a trainee nun, few of those facilities existed; the nuns lived and received lay practitioners in small huts in the forest. “In the early days, the monastery administration was rather strict,” she writes. “There was also more physical work, as there were only a few residents.” However, meditation practice remained essential to life at Dhammasara, despite the many other duties assigned to a young nun.

In 2009, she became fully ordained. Because the full ordination of bhikkhuni is not recognized in the Thai Forest lineage, the ceremony resulted in the expulsion of teacher Ajahn Brahm from that sangha. “I had not made plans to become a bhikkhuni as I was happy practicing as a Ten-Precept nun, keeping the monastery rules and training as a hermit,” she writes, but she accepted the opportunity to ordain, adding that she was not aware of the controversial nature of the ordination at the time. She stayed on at Dhammasara, finding “the environment of simple living” conducive to her practice. 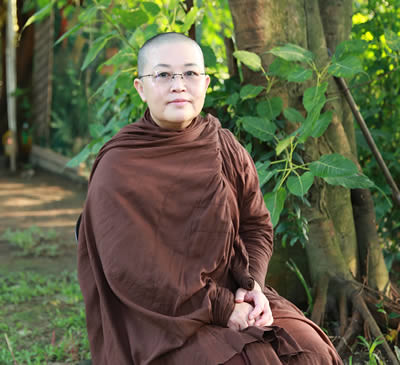 For the women of Dhammasara, the slow pace and peaceful surroundings help them to conduct their core practice: investigating their own minds. “When we are busy, it becomes difficult to find the space and time to process,” she explains. “So, we are accustomed to the familiar ways of suppressing this negativity: just to get on with life. We find ways to get ourselves distracted from dealing with difficulties—such as calling up friends, entertainment, indulging in sensual pleasures. In doing so, we are actually suppressing the issue and not dealing with it.”

In a forest monastery, there is no choice but to face your own mind and few opportunities to distract yourself, she explains. “Being in seclusion may seem like a selfish way of living. But the inner work is harder than one can imagine. It’s difficult to examine shockingly unpleasant things, especially when they are sitting right at the front of our mind. Here, it is a daily training to face oneself!”

In 2010, the long-time abbot of the facility, Venerable Ajahn Vayama, retired, and Venerable Hāsapañña stepped into the role, initially sharing it with another nun before becoming sole abbot of Dhammasara in 2014. It was a busy time: the monastery had for a long time been rather rustic, growing from a simple trailer in the woods. Now it was expanding, building new facilities for monastics and lay visitors. In addition to overseeing construction, the new abbot also had to attend to daily duties, train novices, and serve the lay community. It was overwhelming. “I made a decision: if I were to stay in this position, I would let go of what I ‘like’ to do and my ‘sense of self,’ and instead practice joyfully in service to others,” she writes.

Her service to the lay community has been appreciated, especially among female practitioners. “Most lay women felt a lot more comfortable to open up to a female teacher, especially on private matters. Physically, they can speak to us personally. If they consult with a monk, the monk will have a chaperone with him as a third person, sometimes making it awkward to talk freely,” she writes. In her experience, she has found that men sometimes prefer a female teacher as well, as it allows them freedom from “having to put up a tough, manly impression.” Living in the forest is one way to escape from what she calls the “fast lane” of city life, and Venerable Hāsapañña finds that the solitary investigation of one’s own mind leads to a greater contentment. “One type of happiness comes from getting things,” she explains. “We don’t deny this happiness exists. However, this happiness is fleeting, giving rise to wanting more and more of it. It doesn’t lead to peace. It is a borrowed happiness.”

But the happiness of living in the present moment—doing dishes, mucking out gutters, hiking across the bridge over the trickling creek, sitting in silence with fellow monastics—this is happiness of a different type. “Keeping precepts has a quality of non-remorse, joy and happiness, and leads to peace. This is wholesome happiness,” she writes. “The highest happiness comes from stillness. Everything becomes good enough. . . . When the craving is stopped—this is the highest happiness.”

The Buddhism of Forks or Chopsticks
An Afternoon with Ajahn Sujato: Personal Courage and Restoring the Sangha’s Moral Purpose
The 2,600th Anniversary of the Global Bhikkhuni Sangha and Fourfold Sangha of the Buddha