Tibetan meditation master Yongey Mingyur Rinpoche has long been a vocal advocate for the benefits of meditation, and in a recent interview he underscored the growing scientific evidence that supports his teachings.

Rinpoche (who founded the Tergar meditation centers that can be found all over the world) describes how, at the age of eight, he suffered from an anxiety disorder, but was able to overcome this affliction through a consistent meditation practice. In today’s world, many of us contend with anxiety, stress, and other negative mental and emotional states as we struggle to balance the expectations of professional, family, and social commitments and obligations.* Rinpoche recently emphasized how meditation can help us face these inner demons.

“It’s all in the mind, isn’t it? Everything is created there and ends there. When you look at the waves in the ocean, it’s up to you—whether you can see the monsters or any other form,” Rinpoche said in an interview with The Times of India. “[Stress and anxiety are] created in the mind. I know it’s not easy to shut anxiety and emotions away. It took me five years to gain control through meditation. At the core of the Tergar meditation is the joy of living—living with awareness. It’s free and pure. It feels like space. Emotion is like a cloud. So meditating helps you connect with space and clear the cloud.” (The Times of India)

And today there is scientific evidence to back up this claim. “Everyone has a baseline of happiness. It is difficult to change that. But neuroscientists have found that with meditation, the baseline can change,” Rinpoche observed. “Money, fame, and power do not change the baseline of happiness. You can win a lottery and feel happy for two years, but then the joy wanes away. You go back to feeling normal. Scientists have also disproved that if you are born unhappy, you will stay that way the rest of your life. But now, they have found that meditation can change that.” (The Times of India)

Buddhistdoor Global has previously reported on the far-reaching benefits of mindfulness and meditation for people with anxiety and/or depression-related disorders,** and there is growing neuroimaging evidence that seems to suggests that meditation does indeed have tangible benefits—not only on the practitioner’s baseline of happiness, but even on the physical structure of the brain.

Sara Lazar, a neuroscientist at Harvard University, found the following in her neuroimaging studies: “We found differences in brain volume after eight weeks in five different regions in the brains of the two groups. In the group that learned meditation, we found thickening in four regions:

1. The primary difference, we found in the posterior cingulate, which is involved in mind wandering, and self-relevance.
2. The left hippocampus, which assists in learning, cognition, memory, and emotional regulation.
3. The temporo parietal junction, or TPJ, which is associated with perspective-taking, empathy, and compassion.
4. An area of the brain stem called the Pons, where a lot of regulatory neurotransmitters are produced.

The amygdala, the fight-or-flight part of the brain which is important for anxiety, fear, and stress in general. That area got smaller in the group that went through the mindfulness-based stress-reduction program. The change in the amygdala was also correlated to a reduction in stress levels.” (The Washington Post) 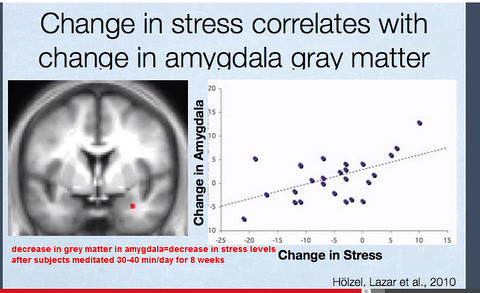 The effects of meditation on the amygdala. From http://meditativescience.net

More research needs to be conducted in this area, but the results so far are promising. Lazar noted that in her study the changes recorded were found after just eight weeks, where the participants of the study, on average, meditated for about half an hour a day. Although it has yet to be studied, some of her students suggest that even as little as 10 minutes of meditation a day could already have a positive effect on the brain.

Rinpoche also offered some advice for those new to meditation and those who, like so many of us, have trouble finding this half an hour in which we can close our minds off for meditation: “We can’t [shut off our minds right away] and we need to accept it. It is best to start with a five-minute shutdown every day. Do it for 30 days. You will slowly start gaining control over the mind. The urge to go and pick up that mobile phone will slowly go.” (The Times of India)

* Buddhistdoor View: Cultivating Non-Attachment in the Midst of Pressured Living

Science has proved that meditation can improve quality of life: Buddhist master (The Times of India)
Harvard neuroscientist: Meditation not only reduces stress, here’s how it changes your brain (The Washington Post)
Tergar: The Meditation Community of Yongey Mingyur Rinpoche

Exclusive Interview: Yongey Mingyur Rinpoche on Living Life with Balance and Awareness
Can Mindfulness be Practiced Independently of Buddhism?
"Pizzled" and "Frazzled" Minds: How Meditation can Help
Countering Depression by Mindfulness Based Cognitive Therapy (MBCT)
Science and Meditation: New Developments in Buddhist Research
The Benefits of Meditation