Representatives of 24 countries and the European Union assembled in Australia on Friday have agreed to create the world’s largest marine wildlife reserve off the coast of Antarctica, encompassing a massive 1.55 million square kilometers of the Southern Ocean.

Under the terms of the landmark deal, agreed at a meeting of the Commission for the Conservation of Antarctic Marine Living Resources (CCAMLR) in Hobart, Australia, the marine protected area (MPA), to be located in the Ross Sea, will officially come under protection from December 2017 and remain a protected reserve for 35 years. It will be off-limits to all commercial fishing, although 28 per cent of the sanctuary will be designated for scientific research, allowing the capture of limited quantities of fish and krill, a staple food for many species, including whales and seals.

“[Friday’s] decision is historic, it’s the first time countries have come together to create a protected marine area outside of any country’s jurisdiction,” said Mike Walker, project director of the Antarctic Ocean Alliance, a coalition of environmental and conservation organizations. “The majority of the planet is covered in ocean—the planet is blue. And 70 per cent of ocean is high sea outside of national jurisdictions. So this is a big deal.” (Deutsche Welle) 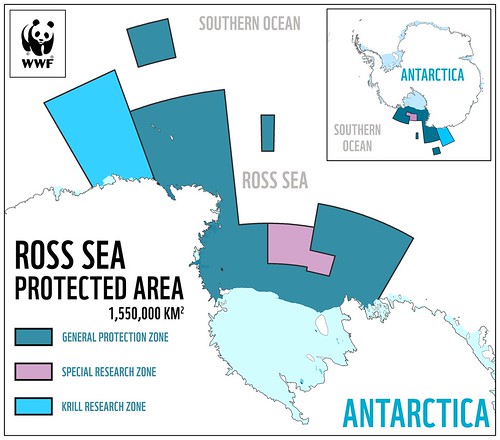 A historic milestone in the global effort to protect marine diversity, scientists say the agreement will also offer opportunities to better understand the effects of climate change on the global ecosystem. The pact has taken years to come to fruition, having previously been stymied by a lack of consensus due to opposition, in particular from Russia, which had previously blocked proposals to establish the reserve on five separate occasions.

“Two years ago, in October 2014, there were two countries blocking this decision: China and Russia,” said Walker. “In the last 24 hours of the [previous] meeting last October, China suddenly agreed to it. Part of their conditions involved increasing the size. So in the last year it was just Russia objecting—and any one country can block the proposal.” (Deutsche Welle)

“The sea is within the Southern Ocean, which is a largely intact marine ecosystem. It hasn’t suffered the same degradation from humans as the rest of the ocean. It’s quite possibly the healthiest ecosystem on the planet,” noted Walker. “And the influence of the Southern Ocean acts as a heart for the ocean globally; it pumps nutrients and fuels currents which sustain the rest of the ocean.” (Deutsche Welle)

The Ross Sea’s relative isolation from human activity means it is almost completely free from pollution and the introduction of invasive species. Noted by marine biologists for its high level of biological diversity, the sea has long been the subject of exploration and scientific research, with some datasets going back more than 150 years.

In a statement following the summit, US secretary of state John Kerry described the agreement as “further proof that the world is finally beginning to understand the urgency of the threats facing our planet. The Ross Sea Region MPA will safeguard one of the last unspoiled ocean wilderness areas on the planet—home to unparalleled marine biodiversity and thriving communities of penguins, seals, whales, seabirds, and fish.” (Live Science) One of the last unspoiled ecosystems in the world. From huffingtonpost.com