An Ashokan edict inscribed into a boulder in Junagadh District in the Indian state of Gujarat. From 10yearitch.com

Two professors from the University of California, Los Angeles (UCLA) have employed creative investigation and deduction to pinpoint 121 locations that could contain previously undiscovered transcribed proclamations of the Indian emperor Ashoka. Working with the latest predictive modeling techniques, the researchers hope their work will enable local researchers to uncover more ancient inscriptions by the Buddhist ruler.

The Mauryan emperor Ashoka (r. c. 268–c. 232 BCE), whose empire encompassed much of the Indian subcontinent, was a key figure in the propagation of Buddhism throughout South and Central Asia and is credited with ordering the construction of thousands of monasteries, stupas, and other Buddhist monuments across the region. Ashoka’s edicts, as the inscriptions are known, are a collection of carvings found on ancient pillars, rock formations, and cave walls. The edicts, representing the earliest tangible evidence of Buddhism, have been discovered throughout modern-day Afghanistan, Bangladesh, India, Nepal, and Pakistan and describe Ashoka’s conversion to and efforts to spread Buddhism, his views on the Dharma, and his moral and religious precepts.

While the existence of known edicts and other related archaeological discoveries has previously come to light through random discovery or comprehensive surveys of entire regions, according to a study published last week in the Indian peer-reviewed scientific journal Current Science, archaeologist Monica Smith and geographer Thomas Gillespie of UCLA employed new predictive modeling techniques that analyze data from existing discoveries and extrapolate the findings to forecast where further archaeological discoveries are likely to be made. 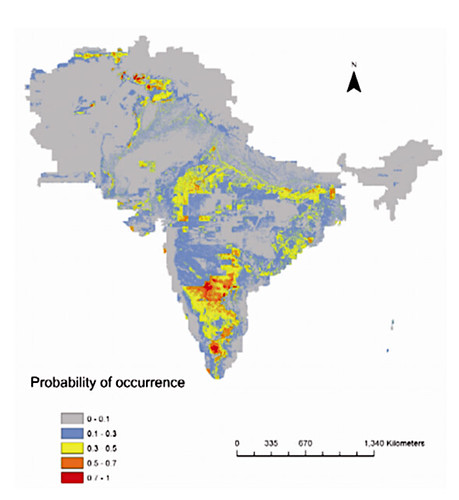 Predicted distribution model for Ashokan edicts on the basis of geology,
population, climate, and topography. From currentscience.ac.in

“With the realities of looking for artifacts on a continental scale, we need more effective tools, and a search mechanism like predictive modeling is a high-priority development,” said Smith. (UCLA Newsroom)

With the help of his team of UCLA doctoral candidates, Gillespie created a database of environmental consistencies at existing edict sites, isolating the common features of 29 known locations in Afghanistan, India, and Pakistan. The team then analyzed the data in comparison with datasets of geographic information systems and Google Earth images, overlaying the identified characteristics against geological and population maps of ancient India. By identifying locations that display the same characteristics as proven sites, the researchers believe they have located accurate markers for potential future discoveries.

“The models really give a high probability of occurrence in the sites we identified,” said Gillespie. “Looking at the data of the existing sites, their placement certainly appears to be non-random. The scribes tasked with carving these edicts really seemed to think about the geology of the chosen space, the towns that were nearby, even the low level of the rock face they carved upon.” (UCLA Newsroom)

The researchers focused on three common factors in particular for predicting where more inscriptions might be found: the specific kind of rock in which the carvings were made, the estimated population density of the area at the time of the inscriptions, and the angle of the rock face bearing the text. One of two boulders bearing Ashokan edicts in the town of Jamal Garhi in northern Pakistan. Written in the Kharosthi script, the rock edicts were listed as a UNESCO World Heritage site in 2003. From wikimedia.org

“We believe that a ground-truthing [sic] search for edicts in any of these locations would yield a higher-than-average probability of finding new inscriptions,” the team noted in their published research. “The development of a purpose-specific research project to examine each of the 121 high likelihood areas represents an ideal opportunity for distributed research projects based in local academic institutions in the subcontinent, utilizing the principles of volunteered geographic information (VGI) and citizen science. We therefore seek to release information about the location of high likelihood areas into the public domain for use by in-country scholars and students.” (Current Science)