The progress of the building work at Tilorien Monastery. From tilorien.org

Although the construction of the monastery has yet to be completed, the Tilorien Monastery in the Ardennes, a region in the south-east of Belgium, is now open to the public and has started hosting regular meditation groups and other Dhamma activities.

The official opening ceremony of the Theravada Monastery took place on 28 October, during a national open day for Buddhist organizations hosted by the Buddhist Union of Belgium. The open day happened to coincide with Kathina day, the day at the end of the rains retreat when traditionally—ever since the time of the Buddha—laypeople would come to the monasteries and give robes and other requisites to the monastics. The monastics are very hands on in the construction process. From tilorien.org

Although an auspicious day for the official opening of the monastery, construction of the monastery was nowhere near finished when the event was approaching, and even in the last weeks before the open day some crucial advancements were made to guarantee that the structure would be able to safely receive visitors. On opening day, one of the monastics had already moved onto the premises and the Dhamma hall had been finished so it was decided that the monastery would be ready to open its doors and start its Dhamma functions in the weeks to follow.

One of the monastics attending the opening ceremony was Ayya Dhammadipa, a German nun living in Sri Lanka, who was in Europe for a visit and learned about the opening of the monastery, along with several other visitors from Germany and London. The opening day also gave some of the locals the opportunity to visit the monastery and get to know its (future) inhabitants and those who support them. 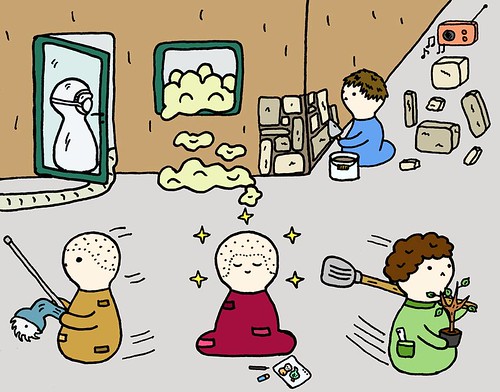 The monastics at Tilorien share some of their adventures (both accomplishements
and set-backs) during the construction of the monastery via Dhamma doodles on
their facebook page. From facebook.com/samitaasbl

The monastery is the initiative of Samita ASBL (founded by Ayya Vimala Bhikkhuni and a friend in 2015), who, in 2016, acquired a piece of land (1790 square meter in size) in the village of Engreux in de province Luxemburg, in the Belgian Ardennes close to the German and Luxembourgish border.

The name Tilorien of the monastery comes from the combination of the Pali word ti(three), which refers to the Three Jewels or Triple Gem— the Buddha, the Dhamma, and the Sangha—and the word lorienwhich in Wallon, the local ancient language spoken in the region, means “crowned with laurels,” interpreted by the monastics as “the most precious, magnificent and awesome thing in the world, most worthy of respect. For us [the monastics of Tilorien Monastery], Lorien also stands for this magical, mystical spiritual journey. Lorien is a refuge on the Path.” (Tilorien Monastery) 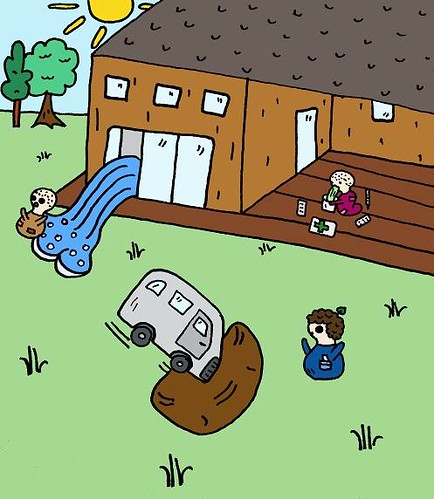 The monastics at Tilorien share some of their adventures
(both accomplishements and set-backs) during the construction of the
monastery via Dhamma doodles on their facebook page. From
facebook.com/samitaasbl

The monastics living at the center are Ayya Vimala (one of the initiators of the monastery) and Ayya Kathrin Vimalanani. Bhante Sujato, an Australian Buddhist monk from the Thai Forest tradition, who was the abbot of Santi Forest Monastery in the Southern Highlands of New South Wales for 10 years, is the spiritual advisor of the monastery.

At present, Tilorien Monastery is hosting daily meal (dana) ceremonies from 10am to 1pm, and a weekly meditation group on Saturday. Until completion of the construction work, the monastery does not have any facility to accommodate overnight stays of lay visitors.

Those interested in the Dhamma activities of the Monastery or those wanting to book a visit, participat in events, or show support, can visit the website of the monastery.