A contingent of some 60 Buddhist monks of the Drukpa Kagyu lineage have concluded a pad yatra, or walking pilgrimage, for peace in Myanmar led by Drukpa Thuksey Rinpoche, the heart son of His Holiness the Gyalwang Drukpa, the spiritual head of the lineage. The monks, most of whom are based in Ladakh in the northern Indian state of Jammu and Kashmir, said the walk was aimed at enabling Myanmar and India to work together and ensuring a smooth transition of power to Myanmar’s new government.

Speaking at the beginning of the yatra late last month, Thuksey Rinpoche said, “This ‘padyatra’ or foot journey encompasses the message of peace and harmony. Our yatras or marches spread consciousness about the importance of harmony and reconciliation.” (Business Standard)

Myanmar’s first freely elected government in 50 years held its first parliamentary session yesterday, following a landslide election victory in November last year for the National League for Democracy (NLD) party led by Aung San Suu Kyi. However, a quarter of all seats in the new parliament are reserved for the military, which also retains control of key ministries. One of the new administration’s first tasks will be to select a new president when outgoing leader Thein Sein steps down in March.

Presiding over a prayer ceremony at Shwedagon Pagoda in the capital of Yangon, Thuksey Rinpoche shared a message of compassion and wisdom with the tens of thousands of well-wishers gathered there: “The Buddha’s teachings transcend all time, therefore in today’s times of multiple conflicts, we can still rely on the wisdom of Lord Buddha to resolve modern day crisis and to achieve peace and harmony.” (ANI News)

“We brought with us the Buddha’s relic to Myanmar to share the blessings, and as a reminder of the beauty of spirituality and our ability to practice genuine spirituality, so that we can all achieve peace, from inner peace to outer peace, from individual peace to collective peace,” he added. (ANI News) 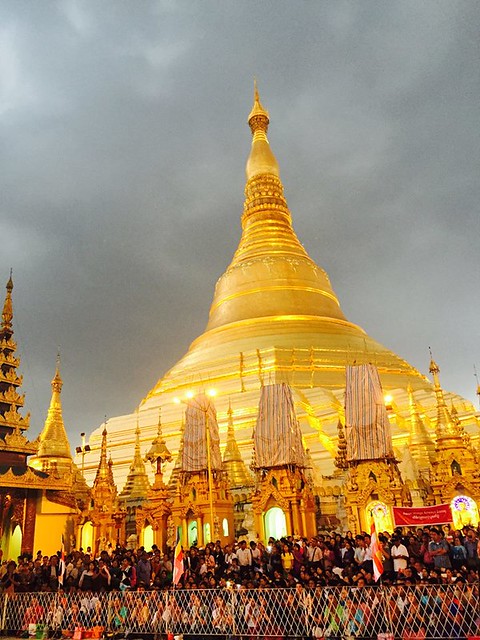 Tens of thousands of well-wishers thronged to Shwedagon Pagoda for the
occasion. From Drukpa Thuksey Rinpoche Facebook

Also attending the ceremony at the pagoda was Indian Ambassador to Myanmar Gautam Mukhopadhaya, who expressed optimism on the future of India-Myanmar relations: “It’s a rare opportunity and definitely a meeting point of two traditions—the Vajrayana and Theravada schools of Buddhism.” (oneindia)

Mukhopadhaya added that the sacred Buddha relic had been brought from Hemis Monastery, founded in 1672 and the Drukpa lineage’s oldest monastery in Ladakh. “It’s very rare that the bone relic of the Buddha has gone out of the country,” he said. “The people of Myanmar have a lot of faith in Buddhism. This event offers a platform of religious faith between the countries. This will strengthen the historical relations that have been there since the colonial period.” (oneindia)

The relic arrived in Mandalay by air on 21 January and was carried through a number of towns and villages by the Drukpa monks before being returned to India on 29 January.

Marking the occasion, a post on Thuksey Rinpoche’s Facebook page dated 30 January observed: “At least 500,000 devotees visited the world renowned Shwedagon Pagoda to pay homage to the holy Buddha’s relic. His Eminence Drukpa Thuksey Rinpoche together with a hundred Drukpa monks performed well-wishing prayers while they were at the pagoda, before leaving for India. . . . The positive conclusion marked a wonderful beginning to a new friendship and affiliation that would be mutually supportive in benefit of all sentient beings.”