The ancient Dhammayangyi Temple is shrouded in dust as the 6.8-magnitude earthquake hits Bagan on 24 August. From orlandosentinal.com

A 6.8 magnitude earthquake shook central Myanmar yesterday evening, killing at least three people and damaging scores of centuries-old Buddhist pagodas and temples in the Bagan Archaeological Zone. Red Cross officials in the country said they are aware of three fatalities so far, including two children in the town of Yenanchaung, just south of the quake’s epicenter.

The US Geological Survey (USGS) said the temblor struck just after 5pm (1030 GMT) yesterday at a depth of 84.1km near the Irrawaddy River port of Chauk—30km south of the ancient city of Bagan and some 175km southwest of the country's second-largest city Mandalay. Myanmar Earthquake Committee secretary U Myo Thant said the earthquake had extended to nearly all of western Myanmar. Tremors were reportedly felt as far away as Dhaka in Bangladesh, Calcutta in India, and the Thai capital Bangkok.

“Two young girls died [in the town of Yenanchaung] when a pagoda collapsed on a river bank,” said Moe Thidar Win, deputy director of the Myanmar Red Cross Society’s disaster management team. “One man died in a Pakokku tobacco factory when the roof collapsed on him.” (Reuters) 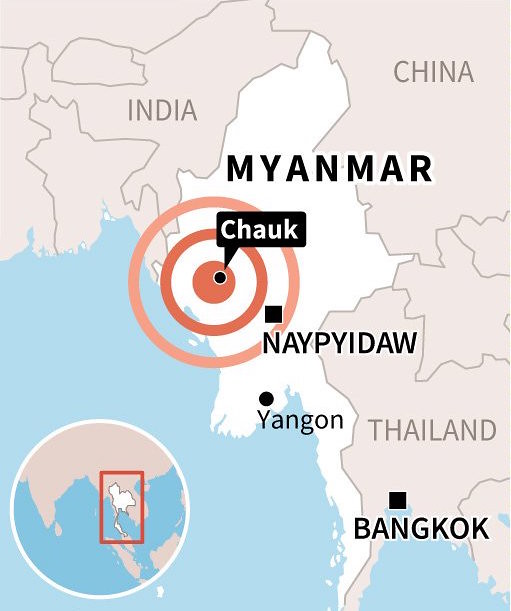 “We felt quite heavy shaking for about 10 seconds and started to evacuate the building when there was another strong tremor,” said Vincent Panzani of London-based charity Save the Children, from Pakkoku, a small town some 25km northeast of Bagan. “Most of the reports of damage have been to the pagodas in the area, with dozens impacted. There have also been reports of damage to smaller, more basic buildings. . . . Several of our staff who’ve lived in this part of Myanmar their whole lives said it was the strongest earthquake they’ve ever felt.” (Los Angeles Times, Reuters)

According to an estimate from Myanmar’s Ministry of Information at midday Thursday, 187 ancient Buddhist pagodas were damaged in Bagan, and 228 across the Mandalay Region. Well-known structures including the Dhammayangyi, Pya That Gyi, Sulamani temples were among those reportedly damaged by the quake, with the authorities speculating that the destruction could jeopardize Myanmar’s bid to have the Bagan Archaeological Zone recognized as a UNESCO World Heritage Site. 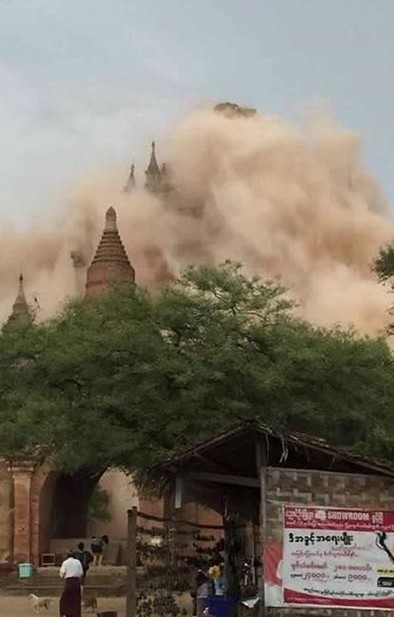 A temple in Bagan sustains damage during the earthquake.
From orlandosentinal.com

“Now we are still checking others,” said U Aung Aung Kyaw, director of the Department of Archaeology, National Museum, and Library, under the Ministry of Culture. “We are disappointed the earthquake hit while we are trying to be listed by UNESCO.” Thein Lwin, deputy director general of the Bagan branch of the department noted, “We have been compiling a list of damaged structures, though we haven’t completed it.” (Myanmar Times, Radio Free Asia)

The Bagan Archaeological Zone in Myanmar’s Mandalay Region is one of the country’s principal tourist attractions and is also popular with religious pilgrims who come to visit the thousands of ancient Buddhist monuments spread over a 42-square-km plain that is ringed by mist-covered mountains. The area is home to between 2,000 and 3,000 historic structures, including pagodas and temples constructed from the 10th to 14th centuries when the city was the capital of the ancient Kingdom of Pagan (849–1297). Many of the centuries-old Buddhist monuments are in disrepair, while others have been restored in recent years in cooperation with UNESCO.