The Cambodian School that was Built from Garbage The school gate, decorated with used plastic spoons and bottle caps. From dw.com

When it seems that the entire world is steadily being buried beneath a growing mountain of refuse, one resourceful man in Buddhist-majority Cambodia has taken matters into his own hands, building an entire school out of discarded waste materials.

A non-profit project, Coconut School is the creative vision of environmentally conscious enterpriser Ouk Vanday, aimed at helping underprivileged children who would otherwise have limited education opportunities. “My initial purpose of creating the school was to give vulnerable children in the village the opportunity to learn English and computer skills because they had never had the chance to do so,” said Vanday, formerly a hotel manager. “I use waste to build the school because there’s plenty of it everywhere, it's easy to find and inexpensive. “But more importantly, I want to educate my students about trash and how recycling it can help the environment.” (Deutsche Welle) 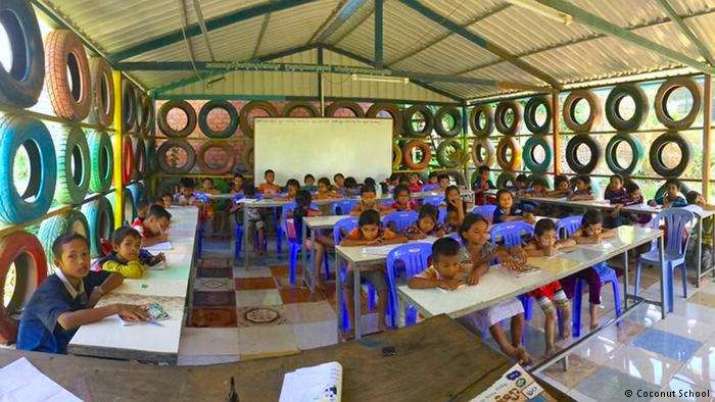 Students in the English classroom. From dw.com The library lined with green beer bottles. From newsworldindia.in

Colorfully adorned with used plastic waste, Coconut School is located in the village of Roneah on Koh Dach (or Silk Island), a river island some 28 kilometers outside of Phnom Penh. As well as being environmentally responsible, Vanday’s vision is also one of self-sufficiency: he chooses not to seek funding from the Cambodian government or charities to cover runnings costs, which he estimates at just US$150 per month. The school’s computers have been donated and Vanday is looking to install solar panels to reduce the cost of electricity.

“The concept is when we teach the children, we offer them knowledge,” said Vanday. “In Cambodia, even if people have education, they still throw away plastic every day because they’ve learned this from their parents. It’s not easy to stop them, so that’s why we show them the benefit of the plastic. When you throw the plastic, you throw the benefit.” (Channel NewsAsia)

Alongside English language classes and computer studies, the school, perhaps unsurprisingly, also teaches children the value minimizing waste and recycling, giving discarded items a new lease of life, which Vanday says stimulates the children’s creativity while keeping the environment clean. “We teach the children to learn, but [to] learn is not to ‘follow me,’” said Vanday. “Learn to think. Think for what? Think to create a new thing for the world. We teach the children to wonder. Wonder, think, do, understand, share, be happy.” (Channel NewsAsia) Indeed, 80 per cent of the waste used to build the school has come from the students themselves, who pay their monthly school fees in trash. “Other people see trash as useless, but for my students, it’s their school fee and what their school is made of,” Vanday explained. “When they can see the benefits, they will learn from this young age not to throw their trash on the streets.” (Deutsche Welle)

Coconut school has been so successful that Vanday is now launching a similar project on Kirirum Mountain in the southern province of Kampong Speu.

“We are part of global problem so let’s work side by side. Our world needs us to protect it. Not for yourself, not for myself, but our children in 100 years. That is our responsibility,” Vanday emphasized. “Don’t wait for someone to change you, change yourself. And people will join you in the future.” (Channel NewsAsia) The children play a role in building their school. From newsworld india.in

Buddhism is the official religion of Cambodia, with 96.9 per cent of the population of 14.14 million following Theravada Buddhism, according to data for 2010 from the Washington, DC-based Pew Research Center. Islam (2 per cent), tribal animism (O.5 per cent), and Christianity (0.4 per cent) represent the bulk of the remainder. According to the Ministry of Cults and Religious Affairs, there are 59,516 Buddhist monks and 4,755 monasteries in Cambodia.