People gather outside the royal crematorium in Bangkok’s Sanam Luang. From abcnews.go.com

Marking the end of a year of national grief, hundreds of thousands of black-clad mourners, many openly weeping, lined the streets of Bangkok’s historical quarter to pay their final respects to Thailand’s late king, Bhumibol Adulyadej (1946–2016), who was cremated late on Thursday night in an elaborate Buddhist ceremony. The late monarch’s son and Thailand’s new ruler, King Maha Vajiralongkorn, presided over the proceedings, which are estimated to have drawn more than 250,000 people from across the country.

King Bhumibol Adulyadej (r. 1946–2016) passed away at Bangkok’s Sririraj Hospital on 13 October last year at the age of 88, following many years of ill health. The late king, also known as Rama IX as the ninth monarch of the Chakri dynasty, was the world’s longest-serving head of state and the longest-reigning monarch in Thai history, having sat on the throne for more than 70 years. Widely loved and respected in Thailand, he was popularly seen as a unifying figure of stability in the country that has struggled through decades of political instability punctuated by numerous military coups. His only living son, Maha Vajiralongkorn, has since assumed the throne, although he does not enjoy the same level of public approval as his late father. Thailand's new king, Maha Vajiralongkorn, during a ceremony for the royal cremation. From reuters.com A series of complex Buddhist ceremonies and Brahmin rituals, which began on Wednesday, is being held over five days for the late monarch who had lain in state in the Dusit Maha Prasat Throne Hall within Bangkok’s Grand Palace. Preparations for the state funeral have taken nearly a year at a cost of some 3 billion baht (US$90 million), including an elaborate royal crematorium, built for the occasion and standing more than 50 meters tall, according to officials involved in its design, which is based on Buddhist cosmology.

The crematorium’s main structure is crowned with a seven-tiered roof and spire, and surrounded by eight pavilions representing the mountains surrounding Mount Meru. The pavilions are decorated with sculptures of mythical creatures, such as naga, kinnara, and garuda, from the Himavanta (Thai: Himmaphan), a forest believed to surround the base of Mount Meru. For those unable to attend the funeral in person, 85 miniature replicas of the royal cremation site were set up throughout the country. 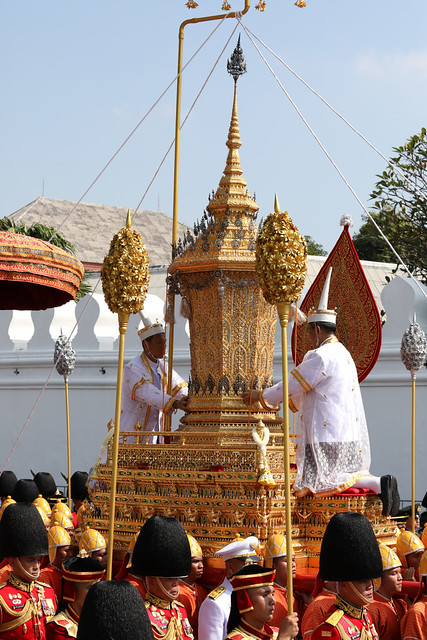 The royal urn is transported in a solemn procession through
Bangkok's historic quarter. From nationmultimedia.com The cremation formalities began on Thursday morning, when King Maha Vajiralongkorn arrived at the Dusit Maha Prasat Throne Hall to pay his respects to his father and ask permission to transfer the royal urn to the crematorium. The urn was then transported on an ornate palanquin borne by 60 officials, joining the first royal procession of the day. For the second procession, the urn was moved to the Royal Chariot of Great Victory, accompanied by more than 2,000 soldiers. A third procession saw the urn borne by the Royal Gun Carriage before being conveyed to the royal Crematorium in the nearby Sanam Luang public area, in the historic center of Bangkok. The Royal Chariot of Great Victory carrying the urn. From reuters.com Royal guards march with the cremation procession. From reuters.com

More than 95 per cent of Thailand’s population was born during the late king’s reign, and most Thais view him as a stabilizing figure in a period characterized by economic transformation and political upheaval. Many of those lining the streets of the Thai capital had spent the night on the pavements near the iconic Grand Palace for the opportunity to say farewell to the only monarch they had ever known.

“He was the lifeblood of the nation,” said 60-year-old Sorana Theppanao, who said he had been sleeping outside for three days to get a spot near the procession. (Reuters)

“I love the late King so much. I am overwhelmed; I don't know how to put it into words,” said 53-year-old Piyarporn Supaporn, a housewife from the eastern province of Rayong. “Our hearts and our minds are directed towards our beloved father.” (Bangkok Post)

“This is the last goodbye,” said 42-year-old Pimsupak Suthin, 42, in tears, who had traveled from Thailand’s northern Nan Province for the occasion. “I really love and miss him. It is very difficult to describe.” (Reuters) Mourners weep as the the royal urn in borne through the streets. From reuters.com Weeping for the late king, mourners prostrate before the royal funeral procession. From reuters.com

The royal cremation proper, started at 10pm local time on Thursday in the presence of the royal family. A column of smoke rising from the crematorium at 11.30pm marked the late king’s final departure for those gathered to say goodbye to the “father” of Thailand. Officials in charge of the ceremony said about 110,000 people had gathered in a cordoned zone near the cremation area, with another 200,000 nearby.

Along with members of the Thai royal family, senior monks, and government officials, foreign dignitaries from more than 40 countries were also present to pay their respects to the late monarch, among them the king and queen of Bhutan, who have maintained close ties with Thailand’s ruling family, and royals from Britain, Japan, the Netherlands, Norway, Spain, and Sweden. The royal urn is seen inside the ornate crematorium near the Grand Palace. From reuters.com

On Friday morning, the Buddhist rituals and rites continued. The late king’s cremated remains were blessed by Supreme Patriarch Somdet Phra Maha Muniwong, head of Thailand’s monastic sangha, and King Maha Vajiralongkorn, whose coronation can only take place after his father’s funeral, returned to the crematorium to lead a ceremony to transfer the ashes back to the Grand Palace, where the funeral will continue until Sunday.

Thailand is predominantly a Theravada Buddhist country, with 93.2 per cent of the kingdom’s population of 69 million identify as Buddhists, according to 2010 data from the Washington, DC-based Pew Research Center. Smoke rising from the royal crematorium at 11.30pm on Thursday. From bangokpost.com