Ven. Ajahn Brahm delivers the keynote speech for the inaugural conference. Image courtesy of the author

Nakhon Pathom Rajabhat University in central Thailand played host to the 1st ASEAN Buddhist Conference on 22–23 September. Drawing monastic and lay speakers and participants from 23 countries, the inaugural forum, with the theme “ASEAN Buddhists: Beyond 26th Buddhist Century,” focused mainly on the re-establishment of female ordination in the Theravada tradition.

The venerable British monk Ajahn Brahm, the abbot of Bodhinyana Monastery in Western Australia, delivered the event’s keynote speech, titled “We Are On the Right Side of History,” in which he offered words of encouragement to the re-emerging bhikkhuni sangha. Acknowledging the opposition to female ordination from some quarters, Ajahn Brahm noted that at certain points in history, many scientists had been considered wrong and faced public opposition—and in some cases, even risked their personal safety—beecause of their research and views that were later proven to be correct.

Ajahn Brahm also quoted the late Sri Lankan Buddhist monk and scholar Ven. K. Sri Dhammananda, who once offered the observation that a chair, which has four legs, is stable, but a chair with a leg missing is not stable—likewise, the Buddhist sangha, which is fourfold, cannot be stable with the absence of the bhikkhuni order. He urged the male monastics present to stand beside and support the nuns in their struggle for mainstream recognition. 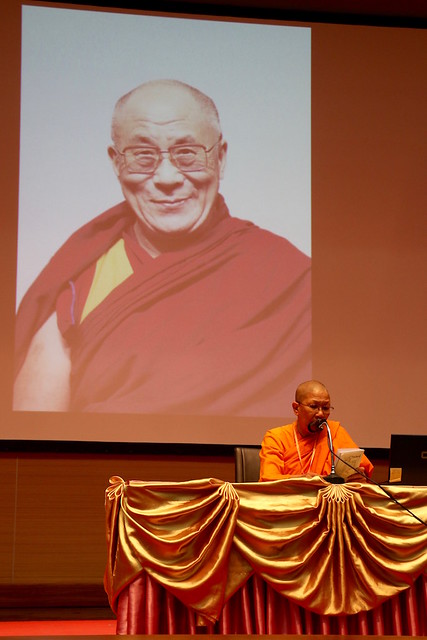 Prof. Bhikkhuni Dhammananda reads a special message for the
conference from His Holiness the Dalai Lama. Image courtesy of the
author

His Holiness the Dalai Lama sent a special message for the occasion, which was read on his behalf by Prof. Bhikkhuni Dhammananda, Thailand’s first fully ordained Buddhist nun. The Dalai Lama expressed his great pleasure in addressing the conference: “I understand that the situation of Buddhist nuns and Tibetan nuns in particular will be discussed in the conference . . . Forty years ago, I urged nuns also to study classical texts and later this year we will be awarding the highest doctorates to nuns who have completed their study.” His Holiness also expressed the joy he had felt observing a debate by school children, who had been trained by a nun, in one of India’s Tibetan settlements.

The conference also celebrated the 72nd birthday of Ven. Dhammanand, noting two significant achievements: her scholarly work in the field of Buddhism and her path-breaking contributions as a monastic practitioner that have paved way for many Buddhist women, and enabled them to attain a position of respect in Theravada society. Ven. Dhammananda also spoke about recent developments in the re-establishment of the bhikkhuni order, thanking the assembled monks, many of whom also spoke during the conference, for their support of the bhikkhunis.

A total of nine panel sessions were held during the two-day forum, which discussed the history and the revival of the bhikkhuni order, the current state of Buddhism and female monasticism, the challenges facing Buddhism within ASEAN,* as well as education, Buddhist arts, history, ecology, and Buddhist contributions to various countries. The official poster of the conference. Image courtesy of the author

The conference was organized by Buddhasavika Foundation in Thailand, the Network of Asian Theravada Bhikkhunis in Vietnam, Nakhon Pathom Rajabhat University’s Buddhabhat Research Unit, the South and Southeast Asian Association for the Study of Culture and Religion in India, the Gotami Vihara Society in Malaysia; STIAB Smaratungga in Indonesia; and the Dhammamoli International Buddhist Education Centre in Myanmar.