Thai King Memorialized in Buddhist Temples Around the World

As millions of people across Thailand mourn the passing last week of the widely beloved King Bhumibol Adulyadej (9 June 1946–13 October 2016), Buddhist temples and Thai communities around the world—from Los Angeles and London to Hong Kong, Singapore, and Sydney—held ceremonies to memorialize the revered monarch who has had such an enduring influence over the country he ruled. 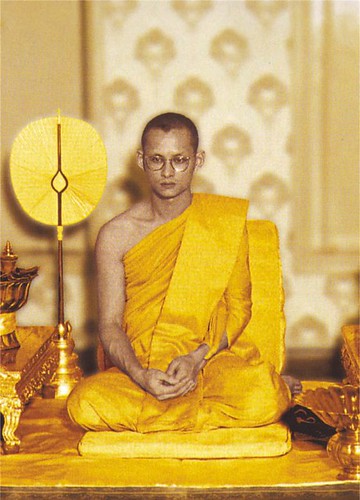 On 13 October, the Royal Household Bureau announced that the king of Thailand had passed away at Bangkok's Sririraj Hospital at 08:52 GMT (15:52 Bangkok time), marking the end of a 70-year reign. Prime Minister, Prayuth Chan-ocha, the head of Thailand’s military government, announced a year-long period of national mourning for the king who was seen as a unifying figure of stability for the country that has struggled through decades of political instability punctuated by numerous military coups.

In southern California, home to the largest Thai community in the world outside of Thailand, Buddhists gathered at the Buddhist Wat Thai Temple in Los Angeles’ San Fernando Valley to mourn and pay their respects to the late Thai monarch. “I just know that I loved my king, he is the king that helped everybody, helping the poor, everything, you know?” said Thai expatriate Stella Boonyawan. “You’ll never find a king like our Thai king, in the whole world. Our king [was] the best.” (Reuters)

The grief was also apparent in Sydney, Australia, which has the second-largest Thai expat community after Los Angeles. About 400 Thais attended prayers for the king at the temple Wat Buddharangsee on Friday, followed by a period of meditation. The prayer session was scheduled to continue until today. A special ceremony was held on Sunday at the largest Buddhist temple in Switzerland—Wat Srinagarindravararam, in Gretzenbach in the northern Swiss canton of Solothurn, the construction of which was largely funded by the Thai king’s mother. A similar memorial was held at Wat Buddhavihara, a temple near the city of Lausanne, where the young Bhumibol Adulyadej spend many years living and studying between 1933 and 1951. Bhumibol’s studies of the Swiss constitution and democracy were to become a major influence in the development of Thailand’s democratic system. Bhumibol also met his future wife, the present Queen Sirikit, in Lausanne.

Singaporeans and Thais gathered at the Wat Ananda Metyarama Buddhist temple in Singapore over the weekend for a Buddhist ceremony led by Thai monks. Attendees included two representatives from the Inter-Religious Organisation, Singapore—secretary and Buddhist representative Sam Poo and Sikh representative and treasurer Harbans Singh. “He always cared for his people like family,” Singh observed. “He's been an apostle of peace and harmony in Thailand. I am very saddened by the loss of such people. I hope we can do something to follow their good example.” (The Straits Times) In Taiwan, the New Taipei City government and the Ling Jiou Mountain Buddhist Society announced on Sunday that they would jointly establish a public altar for people wishing to mourn the death of the revered king. The Ling Jiou Mountain Buddhist Society noted that it shared a close relationship with the Thai monarch. According to organizers, an exhibition about the king and his friendship with Taiwan would be held, in addition to memorial services. Public altars were also set up in the cities of Kaohsiung, Taichung, Tainan, and Taoyuan.

In the city of Petaling Jaya some 16 kilometers from the Malaysian capital Kuala Lumpur, meanwhile, Thai Buddhists memorialized the passing of King Bhumibol at Wat Chetawan, a temple built in the 1950s and funded by a donation from the king himself. “We Siamese of Malaysia feel very proud of the King; he is very good,” said Phra Sophonchariyaphorn, the chief monk of Chetawan Temple. “I really love the King.” (Channel NewsAsia)

A somber memorial was also held at Wat Buddhapadipa in London, where one attendee, Pipad Krajaejun, a lecturer from Thailand’s Thammasat University, observed that many people of different races and nationalities had showed up to pray and mourn together. “It feels like we all lost our own blood relative,” he said. “We all feel the same way.” (Bangkok Post) King Bhumibol Adulyadej, also known as Rama IX as the ninth monarch of the Chakri dynasty, was the world's longest-serving head of state and the longest-reigning monarch in Thai history, having ascended the throne in 1946 and reigned for more than 70 years. The king is widely loved and respected in Thailand, where he was viewed as a unifying force, but his passing comes at a time of political upheaval, with the subject of succession an increasingly sensitive topic. His only living son, Maha Vajiralongkorn, the crown prince, is poised to assume the throne, however he does not enjoy the same level of public approval as his father. The kingdom’s strict lèse majesté laws, which prohibit defamation of the royal family, mean criticism of the royal family is forbidden and public discussion of the line of succession is heavily curtailed.