Teachers of Buddhism in High Demand at Australian Public Schools Such is the growing popularity of Buddhism in Australia that more than 3,000 public schools in the eastern state of New South Wales are now facing a shortfall of teachers of Buddhist scriptures. Buddhist Council of New South Wales chairman Brian White said the council, which trains scripture teachers, already had 70 teachers volunteering in public schools in the state, however at least another 60 are needed.

“We have a waiting list of schools across the state and we’re being contacted all the time by different schools that need Buddhist teachers for their classes,” said White. (ABC News)

Although the first clear example of a Buddhist settlement in Australia dates back to the 1850s, Buddhism first began to gain a widespread foothold in the late 1970s, largely as a result of immigration from Southeast Asia in the wake of the conflict in Vietnam War, but also with the spread to Western countries of Tibetan Buddhism. According to 2011 data from the Australian Bureau of Statistics, Buddhism is now the second most popular religion in Australia behind Christianity, with more than half a million Buddhists in the country (out of a total population of about 21.5 million at the time). This number has been growing rapidly—doubling between 1996 and 2006. Roughly 75 per cent of Australia’s Buddhists are Buddhist families originating from Asia who have migrated to Australia in recent decades, with the remaining 25 per cent mostly Australian-born Caucasians who identify as Buddhists. 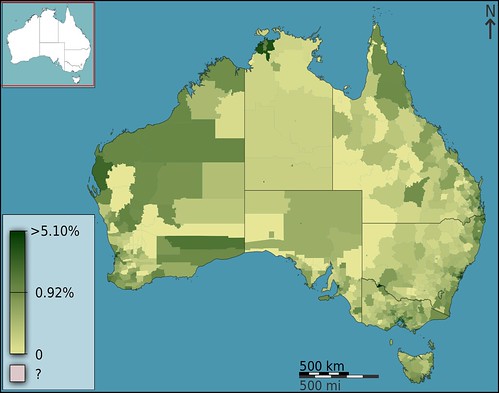 People who identify as Buddhists as a percentage of the total population by
geography, as of the 2011 census. From wikipedia.org

“[I think the demand for teachers among schools is being] driven by a few things—[a] general raising of awareness in meditation right across society and how beneficial that can be, and the realization that even six- and seven-year-olds can meditate for a few minutes and benefit from that,” said White. “But also Buddhism itself has a fairly good image across society of being a peaceful and practical way of life.” (ABC News)

At one such school, Byron Bay Public School, about 150 children—more than a quarter of the student population—are enrolled in the Buddhism classes offered there. The school’s coordinator for the program, Emily Coleling, has been actively seeking additional manpower to help meet the demand. “I think we’re probably in quite an open-minded area . . . and Buddhism is a fast-growing religion,” said Coleling. “A lot of the children actually go from one scripture class to another, so Buddhism is one they’ll experience, then they might go to Ba’hai, or Christian, or ethics, and then they can choose for themselves—so that indicates an open-mindedness on the part of the parents in this area too.” (ABC News)

Anna Halafoff, senior lecturer in the sociology of religion at Deakin University in the state of Victoria, said the growing interest in Buddhism among Australians was also due to a sense of dissatisfaction with mainstream Western religions. "Mainstream religion is currently being critiqued by individuals and also by groups. . . . We know that people are now drawn to a more individualized approach to religion—people like to pick and choose and combine different things,” she said. “There’s a lot of things going on here—why people might be turning away from mainstream Christianity and also maybe being drawn to other religious groups, but also maybe not being religious at all.” (ABC News) “There are significant numbers of people who have converted to Buddhism or who practice what some scholars have called ‘nightstand Buddhism’—as in you might not say you’re a Buddhist but you might be interested in meditation, or you might read books by the Dalai Lama,” Halafoff noted. “I think Buddhism has widespread popularity in Australia and I think part of that is to do with the public profile of His Holiness the Dalai Lama, who is viewed very positively in Australia.” (ABC News)

An Afternoon with Ajahn Sujato: Personal Courage and Restoring the Sangha’s Moral Purpose
When There is Here. A Monk Returns Home to a New Awakening
The Blue Mountains Insight Meditation Centre: Forging an “Australian Buddhism” near Sydney
Life in the Red – The Long Journey to Really Being Daughters of the Buddha
Ani Gosha’s Story