His Holiness Kyabje Taklung Tsetrul Rinpoche, leader of the Nyingma school of Tibetan Buddhism, passed away in Bodh Gaya, in the northern Indian state of Bihar, on Wednesday.

In 1959, Taklung Tsetrul Rinpoche fled Tibet for Sikkim in northern India, where he stayed for two years. While at Rumtek Monastery in Sikkim, he received empowerments and transmissions of the Treasury of Oral Instructions and Kagyu Mantra Treasury from His Holiness the 16th Gyalwa Karmapa. In Kalimpong, West Bengal, he received all the empowerments and transmissions of the Great Terma Treasury and the Nyingma Kama, and some of the Dharma treasures of Dudjom Lingpa, from Kyabje Dudjom Rinpoche.

In an autobiographical essay on the Rigpa Shedra Wiki website, Taklung Tsetrul Rinpoche relates: “Later I went to a new Tibetan refugee settlement in Simla [Shimla], India, where in the years that followed I worked with the community, local and state government officials, and the Office of His Holiness the Dalai Lama to found a new Dorje Drak Monastic seat in exile, to preserve, foster, and expand the teachings of the Changter lineage, since Thubten Dorje Drak Monastery in Tibet had been completely destroyed. Today there are almost 80 monks there and several in retreat.

“I have offered the Changter, and other dharma empowerments and transmissions at the direction of prominent lamas of different lineages at various monasteries in Bhutan, India, and Nepal, including Namkhai Nyingpo Rinpoche in Bhutan, Kyabje Penor Rinpoche in Mysore, and Dilgo Khyentse Rinpoche at Shechen Monastery in Nepal.”

On 6 March 2012 in Shimla, Taklung Tsetrul Rinpoche was appointed head of the Nyingma tradition, the oldest of the four major schools of Tibetan Buddhism, the others being the Gelug, Kagyu, and Sakya traditions. 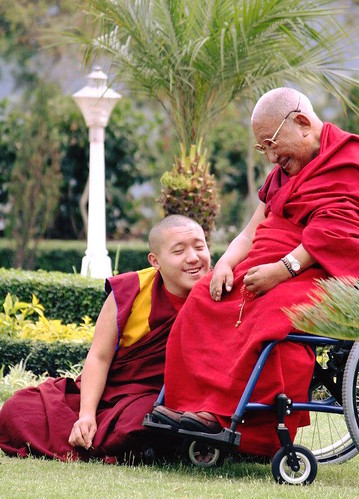 In a personal statement, Dilgo Khyentse Yangsi Rinpoche, the recognized incarnation of Dilgo Khyentse Rinpoche (1910–91), said, “It is with deep sorrow that I regret to inform all our Dharma brothers and sisters that the Sixth Nyingmapa Head, Kyabje Taklung Tsetrul Rinpoche, has passed into parinirvana today. I request all my dear Dharma friends to please practice Guru Yoga and pray for the swift and good rebirth of His Holiness. It is through our merit and unwavering dedication that we have had the great fortune of receiving His Holiness' guidance and blessings. We must remember that the Guru truly never leaves us.”