To celebrate and welcome the Year of the Dog, Taiwan’s Fo Guang Shan, an international Buddhist monastic order, is hosting the “Fo Guang Shan 2018 New Year Festival of Light and Peace.” The theme of the month-long festival, which started on 16 February, is based on the New Year Spring Couplet by Fo Guang Shan’s founder, Venerable Master Hsing Yun: A Family Legacy of Loyalty and Honor, and seeks to inspire a spirit of loyalty and honor for the new year.

Fo Guang Shan is an international Chinese Buddhist monastic order and global charity based in Taiwan. Its headquarters, Fo Guang Shan Monastery, is the largest Buddhist monastery in Taiwan. Founded in 1967, the order advocates humanistic Buddhism and has become known for its efforts to modernize Chinese Buddhism. Master Hsing Yun is something of a celebrity in Taiwan, where he is affectionately known as one of the “four heavenly kings” of Buddhism, the others being the founders of the Dharma Drum Mountain, Tzu Chi, and Chung Tai Shan orders. These four global organizations are among the most influential Chinese Buddhist bodies in the world. This year, visitors to the festival have the chance to make traditional lanterns, watch folk performances, and appreciate avant-garde 3D projection mapping during the light show. They can also offer lights and peace lanterns to the Buddha, copy Buddhist scriptures, and experience Zen meditation to sweep away any turbulence within their hearts and settle their physical and mental condition for the New Year. Phoenix, a nimble and colorful dance performed by people of Dai ethnic heritage. From hk.crntt.com

Family reunions and visiting relatives are important activities during Chinese New Year, and in honor of this tradition, Fo Guang Shan has designed an augmented reality treasure-hunt game called Buddha GO in which the entire family can participate—combining the wisdom of the elder generation and creativity and technical skill of the younger generation.

There are also 10 exhibitions for a variety of traditional crafts, including music, dance, sculpture, botany, and literature. Among them, The Exquisite Art on Fingertips – Shanghai Art and Crafts and Colorful Yunnan – Ethnic Costumes & Accessories have garnered much attention. Costumes and accessories from China’s Yunnan Province are featured in the Colorful Yunnan exhibition. From hk.crntt.com

During the festival, devotees, monastics, and Buddhist College students come together to create peace lanterns that radiate religious blessings, and festival-goers may experience the peaceful and serene ambiance at the temple as they make their light offerings.

In addition, teachers and students of Fo Guang Shan’s childcare center have designed 10 carnival parade floats, which can be admired during the festivities. Visitors can also play with robot dogs, specially adapted to interact with the public. This year’s visual highlight, however, is The Light Shines, an installation featuring 3D light sculptures. 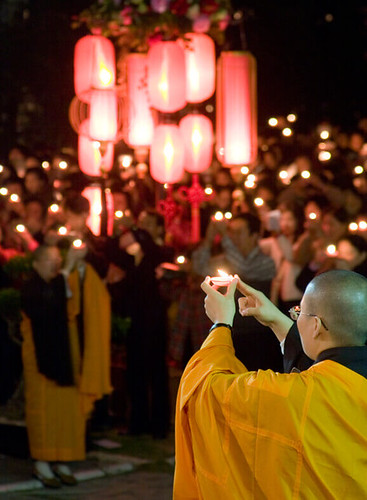 Light offerings during the festival. From fgs.org.tw

The event has so far attracted more than 40 million people and has amazed many participants with its ambitious mix of technology, arts, and Buddhist rituals. The festival will run until 16 March.