The Atlantic Meridional Overturning Circulation (AMOC) helps keep tropical cyclones, such as Hurricane Joaquin above, from becoming too intense. From theatlantic.com

In a new study published earlier this month in the journal Science Advances, climate researchers re-examine the likelihood that the swift and powerful Gulf Stream system of currents in the Atlantic Ocean—otherwise known as the Atlantic Meridional Overturning Circulation (AMOC)—could be affected or even collapse under the cumulative impact of climate change, leading temperatures in the northern hemisphere to drop by as much as 7°C.

The Gulf Stream is responsible for the temperate telatively climates of Western Europe and parts of North America, making them warmer than they would otherwise be. The circulating currents carry ocean water, warmed by the heat of the tropics, to the North Atlantic, where the heat is released into the atmosphere, thereby helping to regulate global climate and weather patterns. As this warmer water cools, it sinks and is eventually carried back around to the tropics before beginning the cycle again.

The potential threat to the Gulf Stream comes from the impact of rising carbon dioxide emissions, resulting in higher temperatures over the North Atlantic. Under this scenario, the warm ocean water carried northwards by the Gulf Stream would no longer dissipate its heat and subsequently would not sink and recirculate back to the tropics, which according to the study, shows “the AMOC collapses 300 years after the atmospheric CO2 concentration is abruptly doubled from the 1990 level.” (Science Advances) 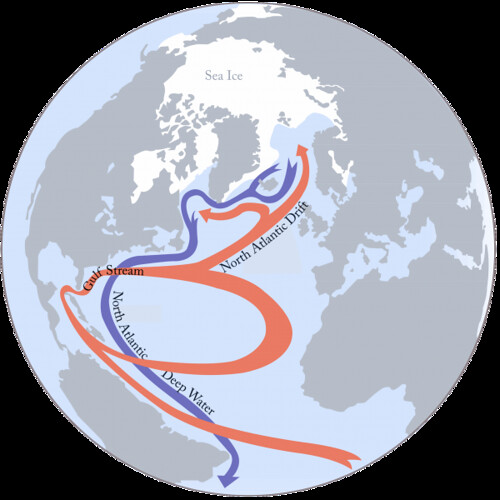 Changes to the Gulf Stream have a far-reaching impact on the global climate.
From realclimate.org

Wei Liu of Yale University, one of the study’s co-authors, acknowledges that his team’s research at still at a very early stage. “This is just a first step,” he emphasized. “The 300-year collapse, and extent and degree of North Atlantic cooling, may be subject to change for different models and different warming scenarios.” (Deutsche Welle)

Liu noted that his fellow researchers at the Scripps Institution of Oceanography in San Diego and the University of Wisconsin-Madison were already planning further research to verify and expand upon their findings, adding that the model he used for this study was based on a “moderate” model, but that it had “opened a window” for further research. (Deutsche Welle)

Climate scientists have been concerned for some years about the possibility of a slowdown in the AMOC, which has been a subject of research since the 1980s amid growing evidence of abrupt climate changes in the history of the Earth due to instability in Atlantic currents. “It is the key component” in global circulation, said Ellen Martin, a paleoclimate and ocean current researcher at the University of Florida. (Yale Environment 360)

The circulation of the global ocean. Throughout the Atlantic Ocean, warm waters (red arrows) is carried northwards near the surface and cold deep waters (blue arrows) travel southward. From e360.yale.edu

The flux of warm and cool ocean currents in the Atlantic also provides impetus for ocean currents across the planet. When the massive volumes of cooling water sink in the North Atlantic, it stirs up the entire ocean, driving currents in the Southern Ocean and Pacific Ocean. Likewise, a slowing of those same currents is also felt on a global scale, cooling the entire Northern Hemisphere, drying monsoon regions in India and Asia, and amplifying North Atlantic storms.

Studies by paleoclimatologists have pinpointed incidents in the distant past when dramatic slowdowns of these currents have cooled Europe by 5–10°C and had other far-reaching effects on the global climate. Yet despite years of intensive study, the implication for modern day climate change remain inconclusive. “It seems to be a fairly stable system, until we push it just the right amount and then we’re in terrible shape,” said Martin. “I don’t think you want to play with the AMOC.” (Yale Environment 360)

Stefan Rahmstorf, head of Earth System Analysis at the Potsdam Institute for Climate Research (PIK) in Berlin, said his own research conducted over the past 20 years points to “quite a serious” risk that global warming will cause a slowdown in the Gulf Stream system. He lauded the study conducted by Lui's research team for helping to “make the wider climate modeling community aware of a potential risk that has not been properly evaluated, and to inform the public that there are risks of tipping points in the climate system that are poorly understood, and that may well have been underestimated in the past.” (Deutsche Welle)

“Yet other impacts [from climate change] are much more certain,” she observed: “Increased surface temperatures, sea level rise, and ice melt.” While the impact on the AMOC remains up for debate, it is almost certain that climate change will bring serious consequences in our time. (The Atlantic)