The recent death of a student leader from Bangladesh’s Chittagong Hill Tracts (CHT) has drawn widespread condemnation from across the country. According to local media reports, 20-year-old Romel Chakma was arrested on 5 April by army personnel and subsequently died on 19 April while in police custody at a hospital in the port city of Chittagong. News of Chakma’s arrest and subsequent death emerged two weeks after the incident, following numerous reports on social media. Protestors allege that Chakma, who was visually impaired, was tortured to death by the army and his body subsequently burned to destroy the evidence, although the army refutes these allegations. 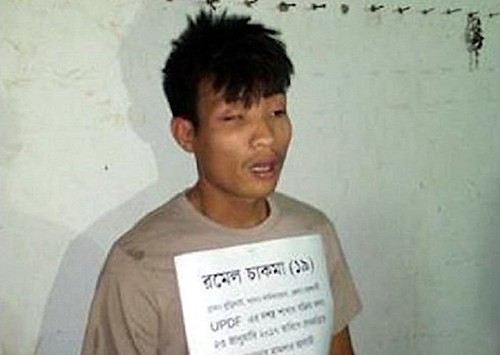 The main religion in Bangladesh is Islam, observed by 90.2 per cent of the population, according to government statistics for 2010. Hindus constitute 8.5 per cent, Buddhists (mostly Theravada) 0.9 per cent, and Christians 0.3 per cent. The Chittagong Hill Tracts region in southwestern Bangladesh, which borders India and Myanmar, is home to more than 11 indigenous communities who are predominantly Theravada Buddhists.

Lt. Col. Mohammad Rashidul Hasan, director of the Inter Service Public Relations Directorate, the media wing of Bangladesh’s armed forces, told The Daily Star newspaper that Chakma had been arrested in connection with two cases involving the torching of a truck and the looting of two buses. Dismissing the allegations of torture, Hasan said that the army had handed Chakma over to local police on the day of his arrest. However, Abdul Latif, the officer-in-charge of the district police station, insisted that police did not receive custody of Chakma.

The parents of the deceased have also alleged that they were denied visiting rights during Chakma’s detention and while he was undergoing medical treatment at Chittagong Medical College and Hospital, where he succumbed to his injuries. They also assert that the army cremated Chakma’s without proper funeral rites and without notifying family members, which security forces also deny.

According to The Daily Star, Romel’s father, Kanti Chakma, has since filed a complaint with the National Human Rights Commission, which has formed a three-member committee to probe the case, meanwhile local police have launched their own investigation of the case. University students in Dhaka protest against the alleged torture and killing of Romel Chakma. From newagebd.com

Various groups and student organizations in Dhaka, Chittagong, Rajshahi, the CHT, and other parts of the country, have been vocal in protesting Chakma’s death. “Romel could have been tried under the law if he had committed any crimes,” said Liton Nandi, general secretary of Bangladesh Students Union. “But the army has not been given the authority to torture a person to death, violating the law.” (Dhaka Tribune)

Shulobh Chakma, a leader of Pahari Chhatra Parishad (Hill Students Union), of which Romel was a secretary, complained that since Bangladesh’s independence in 1971, subsequent governments had ignored the rights of indigenous peoples in CHT. He also condemned the government’s apparent reluctance to try army personnel over past allegations of persecution of indigenous peoples.

The Dhaka- and Copenhagen-based Chittagong Hill Tracts Commission, has written to Bangladesh Home Minister Asaduzzaman Khan demanding a judicial investigation of the death of the student leader, stating: “The untimely death of a young student in an independent state and such activities of the law-enforcing agencies cannot be accepted in any way,” the letter states. “That’s why we are demanding that the home minister form a high-level judicial investigation committee immediately and bring those involved with the incident to justice.” (bdnews24.com) 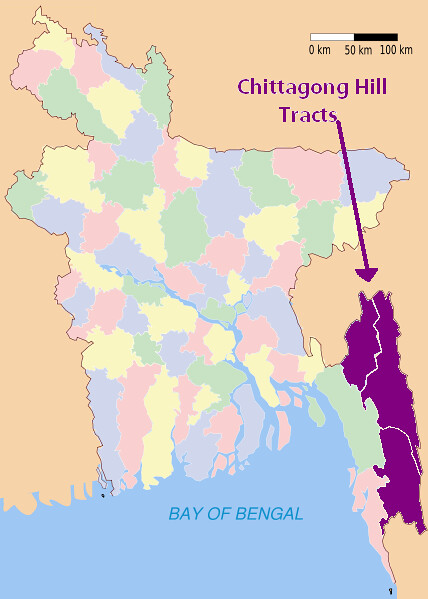 Map of Bangladesh showing the location of the Chittagong Hill Tracts.
From wikimedia.org

After 25 years of violent conflict, the government of Bangladesh in 1997 signed a peace accord with Parbatya Chattagram Jana Samhati Samiti (the United People's Party of the Chittagong Hill Tracts) a political party formed to represent the people of the CHT. Under the accord, the government is obliged to withdraw major military camps from the region, however a 2012 report by the International Work Group for Indigenous Affairs (IWGIA) indicates that one-third of Bangladesh’s army remains stationed in the CHT, along with thousands of personnel from other state military agencies, making the CHT the most militarized area in Bangladesh.