One of Invader’s images on the approach to the Tiger’s Nest. From instagram.com

The French street artist known by the pseudonym Invader, who has garnered worldwide media attention for his guerrilla art that has appeared on buildings and landmarks in cities all over the world,  from New York to Hong Kong, may have overstayed his welcome in the Himalayan kingdom of Bhutan, where he has drawn considerable public ire for defacing sacred Buddhist buildings and monuments.

Invader’s famed mosaic images, which are styled after the pixelated characters of video games from the 1970s–80s, have appeared in more than 35 cities in 33 countries. His estimated 3,600 mosaics depict well known characters from video games and popular culture, such as Pac-Man, Space Invaders, and the Pink Panther. The artist goes to great lengths to keep his identity a secret, and while his work is often praised, with some fetching tens of thousands of dollars at auction, the most recent examples of Invader’s 8-bit aesthetic which, appeared recently in various locations in Thimphu, Paro, and Punakha, apparently inspired by Vajrayana Buddhist imagery, have not been as warmly received.

Invader posted a video to Instagram of his first image at Cheri Goenpa. From instagram.com

Invader published a video to social media of the first of about 10 images he cemented to various structures during his visit to Bhutan—a mandala-style mosaic inside at the historic Chagri Dorjeden Monastery. Established in 1620 and also known as Cheri Goenpa, it was the first Buddhist monastery built in Bhutan by Ngawang Namgyal (1594–1651), the Tibetan Buddhist lama who unified of Bhutan as a nation-state. The French artist claimed he had received permission from the “chief” monk to install his art, although the monastery, one of the most important cultural heritage sites in Bhutan, is currently under a state-funded renovation program.

One eye witness said he had personally encountered Invader while in the act of attaching one of his mosaics to a Buddhist chorten on the approach to Bhutan’s iconic Taktsang Palphug Monastery, better known as the Tiger’s Nest. “I was walking to meet my friends and all of a sudden I see somebody defacing a building in this most sacred of places,” he said. “I studied art history, I love art, I like street art, but something about this crossed an ethical-moral boundary, especially as a visitor to another country.” (artnet) 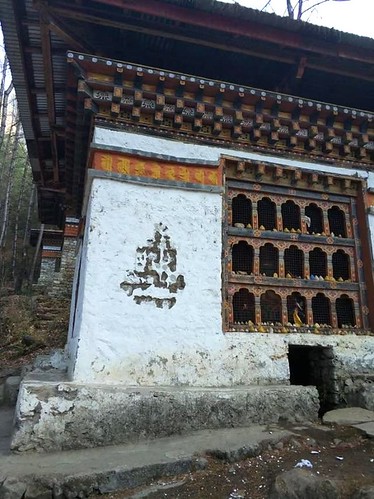 The mark left on after government officials removed one of
Invader's works. From news.artnet.com

Officials from Bhutan’s Cultural Properties Division have since removed Invader’s works, which included a levitating monk, a dragon, and an archery target, the Bhutanese newspaper Kuensel reported. “It’s premature to say anything about the issue at this point,” Home Minister Dawa Gyaltshen is quoted as saying, adding that the ministry would share details once it had reached a conclusion on the matter. (Kuensel)

The newspaper also published a stinging editorial that echoed public sentiment toward Invader in Bhutan, criticizing the artist for cultural insensitivity and a lack of respect for Buddhism. “Art is expression or application of human creative skill and imagination, typically in a visual form such as painting or sculpture to be appreciated primarily for their beauty or emotional power,” the newspaper said in its commentary. “Under the umbrella of art comes creative activities like literature, dance, painting and music, among others. But they come with responsibility. Art must find its place. Otherwise they can be utterly disrespectful or too invasive.” (Kuensel) 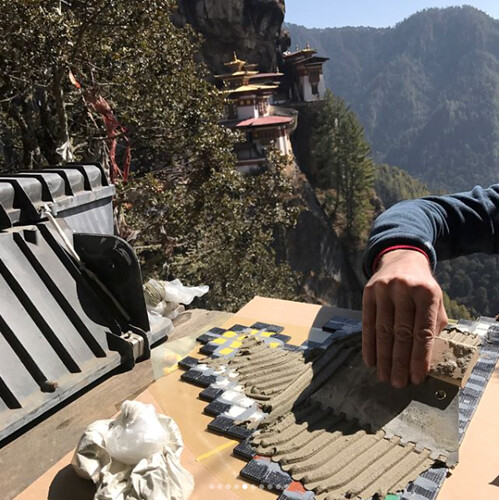 This photo taken from Invader's Instagram feed appears to show the artist in the
act of preparing one of his images. Bhutan's iconic Tiger's Nest monastery
stands in the background. From instagram.com

Invader has come under similar condemnation on social media.

“I am from Bhutan and honestly speaking from my heart, it is not good to dilute the heritage and historical sites of the country you visit,”an Instagram user responded. “We don’t want to change the meaning those heritages and cultural sites convey to us. It should remain intact and should not altered. I appreciate your art but my country is not a good place to practice it because we want to remain intact and original. Good news is that our culture department had already removed your art.”

“The lack of respect and cultural sensitivity from @invaderwashere is seriously disappointing for me as a former fan,” said another critic on Instagram. “Please consider the implications of your artwork instead of acting impulsively for a some fame and followers. You abused the hospitality of the Bhutanese people and quite frankly your pieces here pale in comparison to our ancient art and design. The way you’ve disrespected our cultural heritage and seem unapologetic at that, makes me lose respect for you as an artist and as a person.”

In response to the wave of disapproval, Invader published a short response to his Instagram account on 30 January: “I know that some people will scream that it is disrespectful to have practiced my art in Bhutan. Personally I don’t think so! My practice tells a story, and I’m proud to have write some pages in that wonderful country. Many of the Bhutanese I’ve met were enchanted with it and I thanks them for their kindness and their great hospitality.” A small Vajrayana Buddhist nation, sandwiched between northern India and Tibet, with a population of fewer than 800,000 people, Bhutan is perhaps best known for its national development strategy that emphasizes Gross National Happiness (GNH) over the profit-driven acquisitiveness of unrestrained economic growth. Almost 75 per cent of Bhutanese identify as Buddhists, according to data for 2010 from the Washington, DC-based Pew Research Center, with Hinduism accounting for the majority of the remainder. Most of Bhutan’s Buddhists follow either the Drukpa Kagyu or the Nyingma schools of Vajrayana Buddhism.