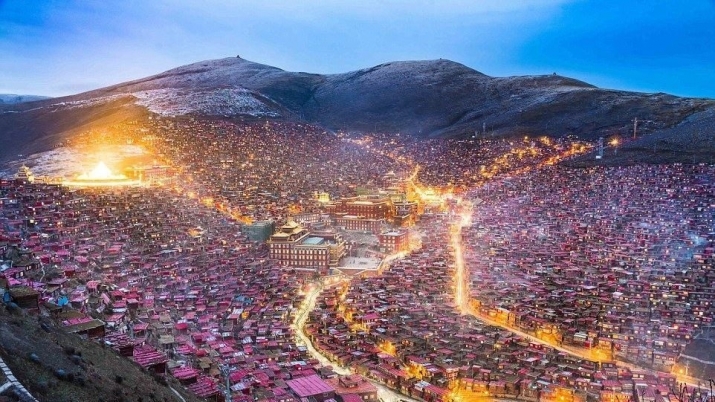 The state authorities have ordered the sprawling Larung Gar Buddhist Academy to reduce its monastic population to 5,000 monks and nuns by October 2017. From change.org

The state authorities have reportedly canceled the annual Dechen Shingdrup ceremony scheduled to be held at the renowned Larung Gar Buddhist Academy near Sertar, Garze Prefecture in China’s southwestern Sichuan Province. The news comes amid continued media reports on the ongoing state-ordered reduction of the institution’s monastic population, which has been accompanied by the demolition of an unverified number of residential buildings that sprawl across the sides of Larung Valley.

The eight-day festival, Dechen Shingdrup, (Accomplishing the Pure Land of Great Bliss), traditionally begins each year on the 18th day of the ninth month of the Tibetan lunar calendar, which this year falls on 17 November. “One of the main features of these assemblies is that senior religious instructors, reincarnate lamas, and other highly learned monks give religious sermons for three to four days to several thousand people who have gathered especially for the event,” said an unidentified source cited by the US-based news broadcaster Radio Free Asia. “But this year China has said this annual gathering may not take place, and instead the monks and nuns have begun to practice privately in their rooms. Meanwhile, the eviction of monks and nuns from Larung Gar continues.” Residential buildings constructed by nuns and monks living at Larung Gar are packed tightly together on the side of the valley. From ibtimes.co.uk

In June this year, Sertar County officials issued an order stating that by October 2017 only 1,500 monks and 3,500 nuns would be allowed to live at the monastic college. The order follows similar moves in 2001, when the state authorities organized a mass eviction of residents from the institute, and late last year, when further expulsions were accompanied by an order to reduce admissions to curb the rapid growth of the monastic population. The order did not give a reason for the decision, but cited two major government meetings during which Chinese President Xi Jinping had stressed “national unity” and the necessity for religious groups to support the Communist Party and “merge their religious doctrines with Chinese culture.” (Los Angeles Times)

Situated in the traditional Tibetan region of Kham, Larung Gar Buddhist Academy was founded in 1980 by the respected teacher Khenpo Jigme Phuntsok (1933–2004), a lama of the Nyingma tradition of Vajrayana Buddhism. With estimates putting the college’s total population at between 10,000 and as high as 40,000 monks and nuns, the institute is widely considered to be the largest center of Buddhist learning in the world. Media reports and social media posts on the demolition of residences continue, although the exact number of buildings razed remains unclear. From ibtimes.co.uk

As the state authorities continue to work on reducing the academy’s monastic population, media outlets report that evicted monks and nuns have been required to sign written pledges that they will not return to the religious center after they have been sent back to their hometowns. Reports say between 1,000 and 3,000 monastic residents have so far been expelled from the college. Three Tibetan nuns studying at the academy have reportedly committed suicide since the government began enforcing the eviction order.

According to some accounts, the main reasons given by the government for its actions at Larung Gar are to reduce overcrowding and to ensure public safety by renovating buildings. “It is common international practice to administrate religious sites in accordance with law,” The Chinese Embassy in London said in a statement cited by the International Business Times. “[Local authorities] aim to maintain order in the temples, provide better public and social services to the temples and their monks and nuns, eliminate risks in areas such as public security, fire control and public health, and create a good environment for the monks and nuns who are practicing in accordance with law and in good earnest.” Expelled monks and nuns wait for transportation away from Larung Gar. From rfa.org