Venerable Diyakaduwe Somananda Thero with Muslim representatives during the mosque tour. From asianews.it

An Open Mosque Day, part of the Visit My Mosque Program, was held on 10 September at Masjidul Akbar Mosque, one of the oldest mosques in Colombo. It was the second interfaith event of its kind in Sri Lanka, organized by the Centre for Islamic Studies (CIS) in association with the Trustees of Akbar Mosque, and aimed at providing non-Islamic visitors of other religions—Buddhists, Christians, and Hindus—with a better understanding of Islam and Muslims. Visitor could enjoy a tour of Akbar Mosque, traditional Muslim foods, and a free rendering of their names in Arabic caligraphy.

“This is a positive effort, worthy of note,” said Venerable Diyakaduwe Somananda Thero from the Buddhist temple Baddegewaththa Viharaya. “It comes at a crucial time to dispel certain beliefs about Islamic traditions. Today many act and think badly about Muslims.” (AsiaNews)

Hindu priest, Rahumananda Sharma from the Sri Karumari Amman Kovil temple in Panchikawatte also voiced support for the initiative. He expressed hope that “the CIS will organize guided tours in other mosques. All of the nation’s population should have the opportunity to participate in events like this. This is very important.” (AsiaNews) 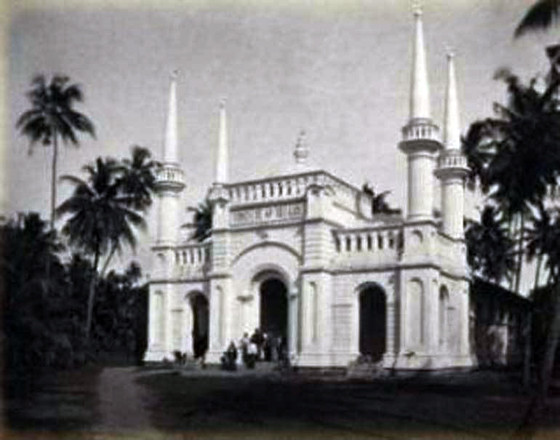 Photo of Akbar Mosque by Charles Thomas Scowen, 1880. From visitmymosque.lk

The Visit My Mosque Program is an interfaith initiative started by Syed Raziuddin Ali, who was a director of the Bahrain-based Discover Islam organization in the 1980s. The first mosque tour was held at Al-Fateh Mosque in Bahrain and subsequently at other mosques across the Islamic world, such as Blue Mosque in Turkey and Sultan Masjid in Singapore. Visitors are keen to explore the architecture and design of mosques, and tours of the mosques provide a good opportunity to explain Islam and to clear up some of the major misconceptions about Muslims.

“Before this event we had a bad opinion about Islamic customs that involve women and Islamic marriage, “commented several Buddhist and Catholic women. “Now, however, we understand that this is part of their religion.” The day truly built a bridge between different religious communities and provided an opportunity for people to ask questions and address their concerns regarding Islam. Islamic prayer demonstration during the mosque tour. From sailanmuslim.com

The tour was given in various languages, including English, Tamil, and Sinhalese. Before entering the mosque, a guide explained how to wash one’s hands and feet before entering a mosque, as part of the ritual of purification, after which visitors were shown the prayer room, with separate sections for men and women, and some prayers.

“As a Muslim, it is important to participate in the process of raising awareness. Giving the right information and eliminating biases is the greatest work a Muslim can do,” explained Shifan Rafaideen, one of the guides. (AsiaNews)

The first public Open Mosque Day in Sri Lanka was held on 26 March at Masjidul Akbar Mosque. Nearly 100 visitors participated in the event.

Asiff Hussein, vice-president of CIS said the program followed the example of the Prophet Muhammad, who hosted a delegation of Christians from Najran at his mosque in Medina. Hussein promised that more events would be organized in the future.