Won Buddhist monks protesting the deployment of THAAD after the final location in Seongju County was announced in October 2016. From zoominkorea.org

Buddhist monks of the Won school of Korean Buddhism have been protesting the placement of the US-developed THAAD system in South Korea. The monks have been demonstrating non-stop since early March along the road leading to the site of the anti-ballistic missile system in Seongju County, some 215 kilometers south of Seoul. The hills of Seongju house many sacred places related to the founders of their progressive Buddhist movement.

The Terminal High Altitude Area Defense (THAAD) system, described as hit-to-kill technology and deployed by the US to defend South Korea from missile attacks by North Korea, was deployed two weeks ago in Seongju on a former golf course made available to the US military by the Lotte Group conglomerate in a land swap deal.

The deployment has also lead to opposition from China, which fears that the system’s radar could be used for espionage, and from North Korea, which has threatened to turn Seongju into “a sea of fire” and “a pile of ash.” (The Economist) Within South Korea, the deployment of THAAD has led to widespread resistance and protest from various segments of society. Especially in Seongju, where residents fear the potential threat of military escalation the system might bring to the region. In addition, the secrecy surrounding THAAD has lead many to fear potential ill-effects from electromagnetic radiation emitted by the system. A village close to the site was the scene of a violent clash between protestors and police as the system was deployed last month. 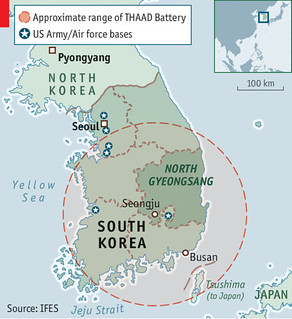 Location of the THAAD system. From
economist.com

On the road leading from the village to the former golf course, the Buddhist monks have been holding a round-the-clock meditation session in protest against the system. The military hardware has been deployed unsettlingly close to some of their holiest sites and the road, now blocked and guarded by the military and the police, was previously used by monks and lay Buddhists for pilgrimages to honor the founders of the Won Buddhism, who lived in the hills in the early 1900s.

“There are many monasteries and temples around here and the holy site is nearby,” said 53-year-old monk Won Ik-son. “We’ll keep praying here until the THAAD goes away. . . . This is our resistance to the government’s violation of our freedom of religion.” (The Washington Times)

“The primary teachings of our grandmaster was about peace,” Won Ik-son continued. “The deployment of THAAD is accelerating the pace of war. The whole Korean Peninsula could be destroyed at any time by conventional weapons. The deployment of THAAD hasn’t done anything but escalate that.” (The Washington Times) Buddhist monks have been holding a round-the-clock meditation session in protest against the THAAD system. From zoominkorea.org

In addition to the protests in Seongju, three Won Buddhist monks have started a hunger strike in Seoul’s Gwanghwamun Square, pledging to fast until THAAD is removed from South Korea. (China Daily)

The THAAD system was a topic of heavy debate in South Korea’s presidential elections earlier this month. In the run-up to the poll, president-elect Moon Jae-in pledged to call for a government review of the system’s deployment, should he be elected.

From Seoul to Somerville: The Founding of a Korean Won Buddhist Temple in Massachusetts
Buddhistdoor View: Honoring the Lessons of Martin Luther King Jr. for Today’s World