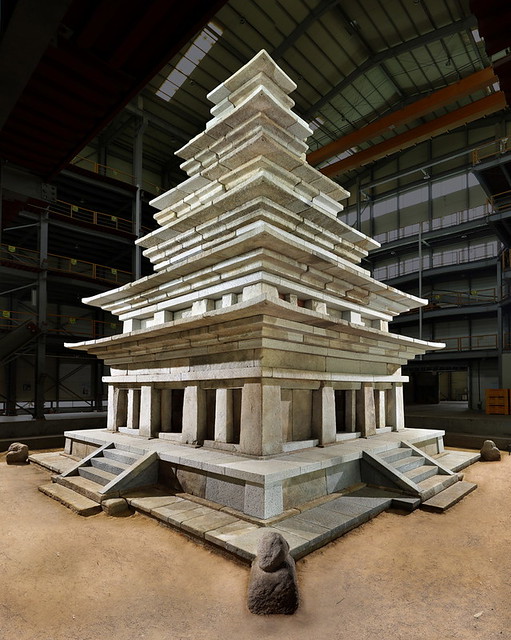 The ancient stone pagoda Mireuksa Seoktap has been undergoing restoration for
the past 20 years. From english.hani.co.kr

South Korea on Wednesday unveiled the fruit of a nearly 20-year project to restore the country’s oldest and largest stone Buddhist pagoda, Mireuksaji Seoktap, which is believed to date to the seventh century.

Established during the Baekje kingdom (18 BCE–660 CE) and located in the modern city of Iksan in North Jeolla Province, the pagoda is part of the Mireuksa temple complex, which was founded late in the reign of King Mu (r. 600–641). The 14.25-meter stone pagoda at Mireuksaji is one of only two Baekje pagodas that have survived to the present day. It was designated a national treasure in 1962 and was added to UNESCO’s World Heritage list in July 2015 as part of the Baekje Historic Areas. The temple, the largest in the ancient kingdom of Baekje and now considered an example of the most advanced architectural skills of the Baekje, Goguryeo, and Silla kingdoms, which co-existed on the peninsula, is also renowned for its ancient four-meter stone flagpole supports, dated to the Later Silla period (660–935). The restored stone pagoda, which stands in the west of the temple complex, currently has only six tiers, but historians believe it may have originally had nine, matching the 27.67-meter, nine-level eastern pagoda, which was completely reconstucted in 1993 in accordance with historical records.

“What’s interesting about the pagoda is that it’s designed like wooden pagodas, but it’s built with stone,” said National Research Institute of Cultural Heritage director Kim Derk-moon, who oversaw the restoration project for 15 years. (The Korea Herald)

The western pagoda was partially restored with concrete in 1915, during the Japanese occupation of Korea, after which it stood untouched until the National Research Institute of Cultural Heritage initiated the current restoration effort.

In 1999, the National Research Institute of Cultural Heritage concluded that the stone pagoda, was in serious need of repair, and the restoration project began in 2001, becoming Korea’s longest restoration initiative for a single cultural heritage item—the restoration team spent 10 of those years carefully dismantling the pagoda. “I went through every historical record from the 13th century Samguk Yusa (Memorabilia of the Three Kingdoms). But no book had a record of how tall it was,” said Kim. “A lot of things about the pagoda have been revealed during the restoration.” (The Korea Herald)

The restoration team sought to use as many old stone blocks as possible for the reconstruction project, bringing in new stones only when necessary. One of the reasons cited to account for the longevity of the ancient Buddhist pagoda is the layers of earth that were applied between the thousands of sculpted stone blocks as a kind of cement, which acted to cushion the blocks and spread the weight of the structure more evenly.

Among artifacts unearthed at the site, a container for sarira (Skt.) the crystalline relics that sometimes remain after the cremation of a revered Buddhist teacher, was discovered inside a stone pillar in January 2009, offering new insights into the pagoda’s history and construction. A sarira container and other artifacts found inside the stone pagoda. From koreaherald.com

Pagodas were important sites of practice for early Buddhists living on the Korean Peninsula, featuring an empty chamber on the first level that practitioners could enter and conduct religious rituals and ceremonies.

A majority of South Korea’s contemporary population—46.4 per cent—holds no religious affiliation, according to data for 2010 from the Washington, DC-based Pew Research Center. Christians make up the largest religious segment of the population at 29.4 per cent, while Buddhists account for 22.9 per cent.