Scientists in Australia have developed a new technique for treating corneal blindness by growing healthy corneal cells on a thin layer of synthetic film that can be implanted in the eye to help the cornea heal. The breakthrough treatment has so far only been used successfully in animal trials, but the researchers are now gearing up for human trials.

The cornea is the transparent outermost layer of the eye, covering the iris, pupil, and anterior chamber (the fluid-filled space between the iris and the cornea’s innermost surface). Working with the anterior chamber and lens, the cornea helps to refract light, accounting for roughly two-thirds of the eye’s optical resolving power. Trauma, disease, and aging, however, can lead to damage, causing the cornea to become swollen and cloudy, leading to vision deterioration and blindness.

“We believe that our new treatment performs better than a donated cornea, and we hope to eventually use the patient's own cells, reducing the risk of rejection,” said biomedical engineer Dr. Berkay Ozcelik, who has headed the research at the University of Melbourne. “Further trials are required, but we hope to see the treatment trialed in patients next year.” (Science Alert) 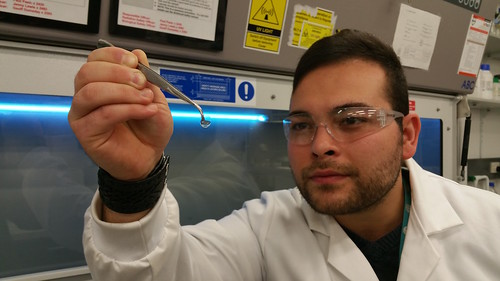 The current most effective treatment for corneal damage is through corneal transplants, however this procedure is accompanied by the risk of tissue rejection and other complications, with an estimated one-third of transplant tissue rejected by cornea recipients. In addition, there is a significant global shortage of donated corneas for conditions that affect some 10 million people worldwide.

“The issue with donor tissue is that the whole process from handling, harvesting cells from the patients, storing and then transplanting them can have detrimental effects on the cells themselves. There is a potential risk for disease transmission and a risk of tissue rejection, since you are transplanting from a foreign body," said Dr. Ozcelik. “Our ultimate aim is to use patients’ own cells to regenerate them on the hydrogel films we have developed, and to implant them directly in the patient's cornea. Since it’s their own cells we are using, there is no risk of disease transmission or tissue rejection.” (Science Alert, International Business Times)

Observing that the synthetic film looks a bit like cling wrap, Dr. Ozcelik explained that the film can be implanted to deliver the cells to the inner surface of a patient’s cornea through a tiny incision, after which it breaks down and dissolves within about two months. “These materials show minimal inflammation, cause no adverse issues at all, and can cause regeneration of tissue, hence allowing us to use this for various applications,” Dr. Ozcelik said. “We’ve actually developed a new class of material using novel chemical methods. The film could be used for other tissue engineering such as skin.” (ABC News)

Dr. Ozcelik added that the other advantage of the technique was that, because the researchers were able to regenerate and increase the number of a donor’s cells in the culture, cornea material from one donor could be used for as many as 20 patients.

The next step of the research is to secure funding and extend clinical trials of the hydrogel film to human subjects next year.