The renowned and revered Nyingma teacher Venerable Domang Yangthang Rinpoche has passed away in Hyderabad, southern India, at the age of 87.

The California-based Ari Bhöd foundation and retreat center also announced Yangthang Rinpoche’s passing on Monday, the Buddhist website Lion’s Roar reported. Ari Bhöd, which works to preserve and transmit the ancient Nyingma lineage tradition, observed in its notice: “Yangthang Tulku was known as a compassionate, humble, no-nonsense Dzogchen master of the Nyingma, Old School Tradition of Tibetan Buddhism,” who was “widely recognized for the quality and depth of his realization, the power of his attainment, and the purity of his transmissions.” (Lion’s Roar)

Yangthang Rinpoche was born in 1929 in Yangthang, western Sikkim, northeast India. He was recognized at an early age as one of the two incarnations of Tertön Dorje Dechen Lingpa of Domang Monastery in eastern Tibet, who was an incarnation of Lhatsün Namkha Jikmé. In 1942, Yangthang Rinpoche traveled to Domang Monastery to study with Domang Soktrul Rinpoche, the main disciple of his previous incarnation. He also received teachings from Dzakha Lama Tsulo, who was a Khenpo at Domang, and from Palyul Khenpo Kunzang Özer, Rahor Dzogtrul Rinpoche, and Washul Kuchen Thupten Chökyi Wangchuk.

When Chinese forces invaded Tibet in 1959, Yangthang Rinpoche was captured and imprisoned for 22 years. After his release in 1981, he returned to Domang to find the monastery completely dismantled. He then obtained permission to return to Sikkim, where he spent the rest of his life.

In addition to mastering the practices of his lineage, Yangthang Rinpoche was trained in Kangyur (the translated words of the Buddha) and the Tengyur (the translated commentaries on the teachings), and in the works of Longchenpa (1308–1364). Yangthang Rinpoche was widely recognized for the quality and depth of his realization, the power of his attainment, and the purity of his transmissions.

Rinpoche spent his final years giving blessings and teachings to his devoted followers around the world. 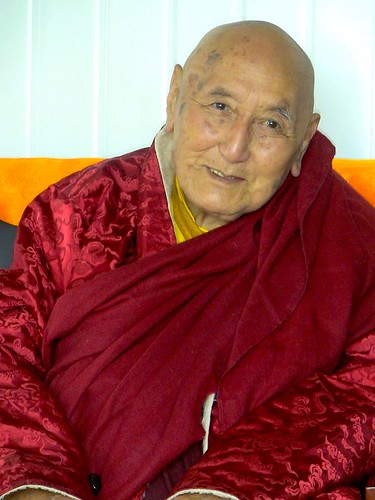 “If you want to practice Dharma for real, then it is necessary to go through these three stages extensively: listening, contemplation, and meditation. Only after this you would know how to practice Dharma. If you want to practice authentic Dharma, you have to give up selfish intention, and abandon samsaric activities. If your thoughts are in accord with worldly things, you will not be able to practice Dharma. This was concluded by Buddha Shakyamuni. He taught that Dharma and worldly concerns cannot be companions, just like fire and water cannot co-exist.” — Yangthang Rinpoche. (Yangthang Rinpoche Facebook)