One of the Buddha statues before, left, and during, right, restoration. From dawn.com

Restoration and preservation workers commisioned by the Department of Archaeology and Museums of Khyber Pakhtunkhwa (DAMKP) in Pakistan have allegedly tampered with nine Buddha sculptures on the outer walls of Bhamala Buddhist Complex. The DAMKP hired ordinary stone hewers to restore Buddhist images at the site, but instead of restoring the images, the workers re-carved the figures. The multi-million-rupee restoration project was completed without approval from the relevant international organizations and authorities.

Bhamala Buddhist Complex, or Bhamala Stupa, is a precious heritage site constructed during the Gandhara civilization. Situated at the foothills of Marhi in Haripur District, some 25 kilometers from Taxila Museum, the site dates to the 3rd century CE.

The stupa is the largest surviving example of a cross-shaped stupa, similar is shape to an Aztec pyramid and unique to the region of Kashmir. British archeologist Sir John Marshal (1876–1958)  first excavated the ruins of Bhamala Stupa in late 1920s and early 1930s. In 1980, Bhamala Stupa was declared a UNESCO World Heritage Site. The cross-shaped stupa at Bhamala. Photo by Muhammad Zahir. From wikimedia.org

According to sources cited by the newspaper Dawn, stone hewers have re-carved a number of sculptures, including many of the lost Buddha heads, with little knowledge or expertise in traditional sculpting techniques or archaeology. “Now, much less an expert, even a lay visitor to the site cannot put faith in what is truly original there,” said one source, lamenting the loss of authenticity. (Dawn)

Asim Meer, president of a local cultural NGO, reacted to the situation by emphasizing the need to protect the heritage of the site. He referred to Article 6(3) of the World Heritage Convention, which prohibits “... any deliberate measures that directly or indirectly damage the heritage,” and article 4 of the convention: “Each state party to this Convention recognizes that the duty of ensuring the identification, protection, conservation, presentation, and transmission of cultural and natural heritage to future generations and the cultural and natural heritage belongs primarily to that State.” (Dawn) 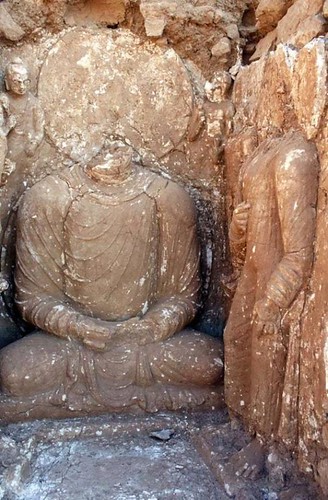 Many of the of original stucco statues have been
removed or damaged by treasure hunters and illegal
excavations. In particuar, statue heads are a target
for treasure hunters. From ancient-origins.net

Dr. Abdul Samad, director of the DAMKP, defended the restoration work, stating: “It is not tampering but consolidation.” In archaeology, the term consolidation describes the use of certain chemicals or materials to prevent further damage to a structure or sculpture. “Any intact sculpture, which is exposed after burial for centuries, is in a fragile condition. So to preserve them, these Buddha statues were consolidated,” Dr. Samad continued.

One of his predecessors, Dr. Fazal Dad Kakar, now president of the Pakistan chapter of the International Council on Monuments and Sites, disagreed with this statement, asseeting that no consolidation took place. Rather, the nine Buddha statues were re-carved in violation of the World Heritage Convention.

In response to the report, one netizen commented: “The condition of heritage sites was lot better before the 18th amendment. . . . Inexperienced staff of KP Archaeology department has failed to protect or preserve our priceless heritage. They have no expertise or knowledge to maintain originality and antiquity of the old sites which is crux of the conservation manual written by Sir John Marshall.” (Dawn)