Repatriated Buddhist Painting Exhibited to the Public in South Korea The Obuldo painting on 14 December 2016, with Ven. Jinwha, head of Songgwang Temple (left), and Ven. Jaseung, head of the Jogye Order (right). From nationmultimedia.com

Last Friday, Songgwang-sa, a Buddhist temple in South Korea affiliated to the Seon (Chan or Zen) school of Korean Buddhism, opened an exhibition showcasing an 18th-century Korean Buddhist painting that was stolen almost 50 years ago and repatriated from America last December.

The painting—titled Obuldo in Korean, which translates as Five Buddhas—dates to 1725 and is one in a series of 53 Buddhas painted by Uigyeom, a Buddhist monk and painter from the Joseon Dynasty (1392-1910). It was part of a set of paintings adorning small chapel at Songgwang-sa.

The painting was stolen in the early 1970s from Songgwang-sa, a temple in Suncheon, South Jeolla Province, 415 kilometers southwest of Seoul. The painting was repatriated last December after having been displayed at the Portland Museum of Art in the United States and has now returned to its original home.

American collector Robert Mattielli, an artist and teacher who lived in Korea for three decades from the 1960s to the 1990s and worked as the director of the arts and crafts programme for the US military in Korea, encountered the painting in the 1970s at an antique shop in Mary’s Alley in Insa-dong, a neighborhood in Seoul now known for its many galleries, cafés, and art and antique shops. The painting had been folded and was hidden inside an old chest. Even though the condition of the painting was severe, Mattielli had the painting flattened, cleaned and framed. It adorned the walls of his home in Seoul for many years, before it travelled to Oregon with Mattielli and his wife Sandra in 1985. 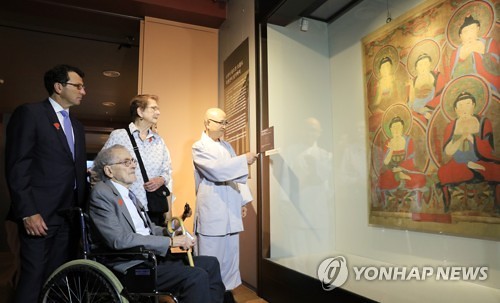 Robert Mattielli (in wheelchair) and his wife at the opening of the exhibit. From
koreaherald.com

In 2014, the couple— both avid advocates of Korean art—decided to donate the painting to the Portland Art Museum, where it was examined by a team of visiting scholars from the Korean National Research Institute for Cultural Heritage.

A few months later, the scholar contacted the museum and the couple having concluded that the painting was indeed Obuldo, which had been stolen several decades earlier. When the couple was informed, they offered to repatriate the painting to Korea. In December last year, the painting returned home, after having been displayed at the Portland Art Museum for a brief exhibition to allow the American public to admire this historic piece of Korean Buddhist art.

Upon the return of the painting, Lee Yong-yoon, chief of the Buddhist sect's cultural properties team, praised the couple: “In most cases, we were able to return cultural properties by participating in auctions. In this case, however, it is meaningful that the owner donated his much-loved Buddhist painting with no strings attached.” (Yonhap)

On invitation of Ven. Jinwha, head of Songgwang-sa, both the couple and the director and chief curator of the Portland Art Museum attended the opening of the exhibition, where the painting was reunited with the other remaining paintings of the 53 Buddha series.

Mattielli mentioned that he was happy to see that the Obuldo had arrived home and was now on display with its brothers and sisters. He thanked the temple for taking good care of the painting.

The exhibition is open to the public and will continue through to 8 October 2017 at the Seongbo Museum at Songgwang-sa.