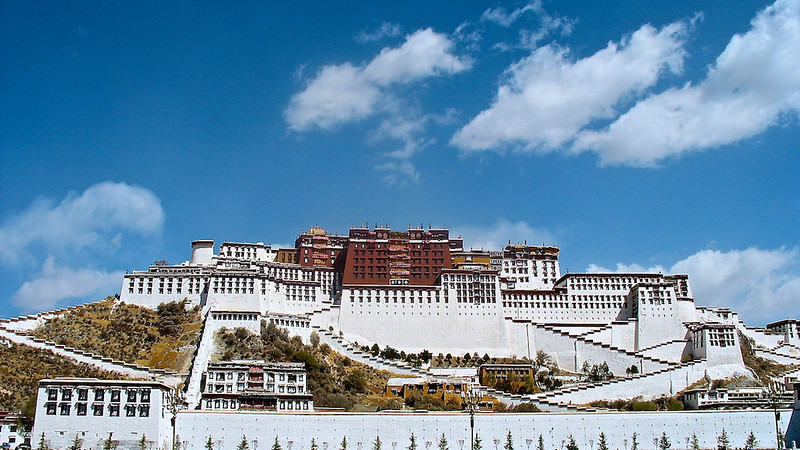 The Potala Palace in Lhasa. Photo by Craig Lewis. From newlightdreams.com

An 18-month renovation project for the historic Potala Palace in Lhasa, capital of the Tibet Autonomous Region, was recently completed, China’s Xinhua News Agency reports. Primarily aimed at repairing the famed golden roof of the main palace building, which had become damaged through prolonged exposure to the harsh Himalayan climate, the undertaking, approved by China’s State Administration of Cultural Heritage,* came at a reported cost of some 31 million yuan (US$4.5 million).

Dophuk Tsang Tsega, head of the company tasked with carrying out the one-and-a-half-year project, said 75 kilograms of gold was used in the renovation of the golden roof, which has seven gilded bronze peaks on the main building. Layout of the Potala Palace. From tibetdisovery.com

Sitting atop Red Mountain in the center of the Lhasa Valley at an altitude of some 3,700 meters, the Potala Palace, named after Mount Potalaka, the mythical abode of the bodhisattva Avalokiteshvara, was originally constructed during the seventh century and has since undergone several major reconstructions. Considered a masterpiece of Tibetan architecture, the complex is a major landmark and symbol of Tibetan Buddhism because of its central role in the traditional administration of Tibet, and remains a major pilgrimage site for Tibetan Buddhists. The existing structure, which was listed as a UNESCO World Heritage Site in 1994, was completed in 1694 following a 45-year construction effort initiated by the fifth Dalai Lama, and later expanded to its current size by the 13th Dalai Lama in the early 20th century.

The nearby seventh-century Jokhang monastery, considered the most sacred Buddhist temple in Tibet, and the 18th century Norbulingka, the former summer residence of the Dalai Lamas, were added to the UNESCO World Heritage Site in 2000 and 2001, respectively. 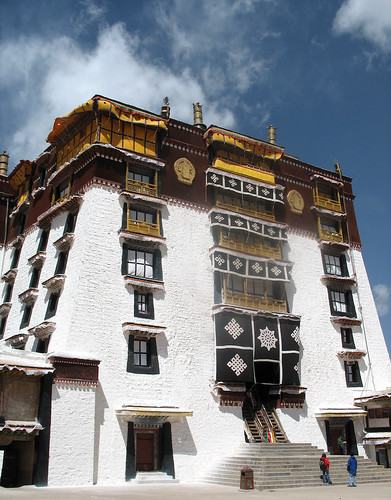 The entrance to the White Palace. Photo by Craig Lewis. From
newlightdreams.com

The Potala renovation program also included strengthening the integrity of the roof’s underlying wooden structure, along with repairs to reliquary stupas of the successive Dalai Lamas, including the fifth Dalai Lama Ngawang Lobsang Gyatso, the seventh Dalai Lama Kelzang Gyatso, the eighth Dalai Lama Jamphel Gyatso, and the ninth Dalai Lama Lungtok Gyatso, as well as the roof of the Avalokiteshvara Temple and ancillary buildings.

Earlier reports also indicated that the renovation would also improve onsite security and surveillance systems at the complex.* The historical site underwent two earlier renovation efforts between 1989 and 2009, at a reported cost of more than 200 million yuan (US$28.7 million).

“The surface of the reliquary stupas was eroded by rainwater, and the color of the gold plating has faded over time,” said Tashi Phuntsok, head of the palace management office’s renovation department, noting that wooden portions of the roof had become compromised from rot, pests, and other natural causes. (Ecns.cn) The golden roof of the main palace building glisters in the bright Himalayan sunshine. From ecns.cn

Originally the official winter residence of the Dalai Lama, the Potala Palace complex, which is comprised of more than 1,000 rooms and halls spread over 13 floors of the Red and White Palaces and numerous chapels and ancillary buildings, has since been converted into a public museum housing 698 murals, nearly 10,000 thangkas, some 10,000 shrines, and more than 200,000 statues, carpets, canopies, curtains, porcelain, jade, gold and silver objects, as well as an extensive library of sutras and historical documents. A worker applied a fresh coat of colored wash to the walls of the Red Palace. From chinadaily.com.cn

In October, the Potala also underwent the annual refresh of the colored wash that gives the building its distinctive white and ochre appearance. Some 500 workers and local volunteers spent 12 days coating the exterior walls of the palace with a traditional formula of milk, honey, sugar, and lime, which gives off a distinctive sweet aroma, according to Dawa Ngodrup, director of the palace’s maintenance department.

“This year, fresh milk was used instead of long-life milk and the proportion of milk and sugar was reduced compared [with] previous years to prevent the painting material from going moldy,” said a member of the palace administration team. (XinhuaNet)

“It is an act of kindness,” observed Ngawang Sangpo, a resident of Lhasa resident who has participated in the annual event for more than a decade. (XinhuaNet) 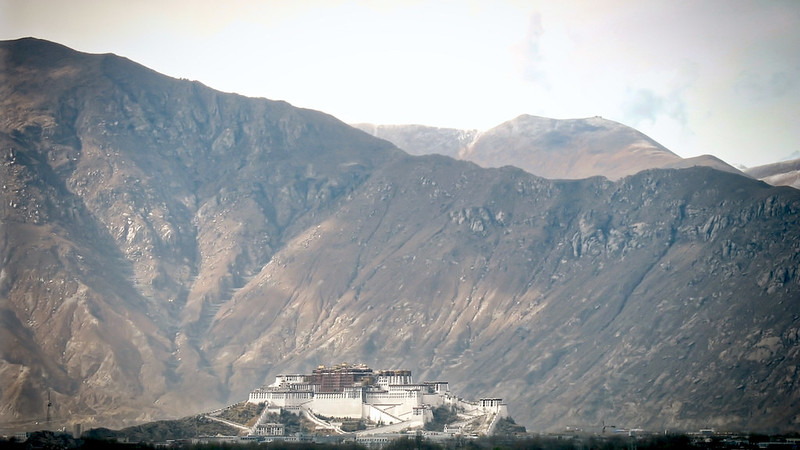 The Potala viewed from across the Lhasa Valley. Photo by Craig Lewis. From newlightdreams.com

The Potala Palace is the most popular and recognized tourist attraction in Tibet: an estimated 1.45 million domestic and international tourists visited the landmark in 2017, according to Xinhua. The state-run news agency stated that the central government had spent close to 3 billion yuan (US$455.9 million) protecting the cultural heritage of the Tibet Autonomous Region over the past two decades.

Tibet as a whole received a little more than 31 million domestic and foreign tourists in the first nine months this year, according to official data from the Commission of Tourism Development of Tibet Autonomous Region, representing a year-on-year increase of 29.9 per cent.

Candid Amdo
A Buddhist Chaplain for the Tibetan Community in Toronto
A Journey Through 5,000 Years of Tibetan History and Culture at the Capital Museum in Beijing