The government of Sakai City in Japan’s Osaka Prefecture recently announced the discovery of a long-lost diary written by Japanese Buddhist monk Ekai Kawaguchi (1866–1945), the first recorded Japanese citizen to travel to both Nepal and Tibet. The forgotten diary, which was rediscovered in the home of the monk’s 90-year-old niece in Tokyo, offers a dramatic account of Kawaguchi’s daring escape from Tibet during a period of virtual isolation from the outside world. 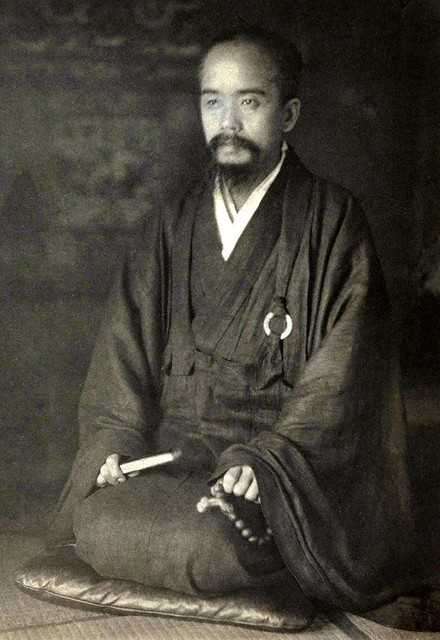 Ekai Kawaguchi in 1899. From wikipedia.org

Ekai Kawaguchi, a native of Sakai, became renowned in Japan for making a total of four journeys to Nepal in 1899, 1903, 1905, and 1913, and two to Tibet in 1900, 1902, and 1913–15. The discovery of the diary in August brings the number of Kawaguchi’s journals from that period of his life to three. Kawaguchi also described his experiences in his book Tibet Ryokoki, which was subsequently translated into English under the title Three Years in Tibet. Kawaguchi is considered a pioneer of Tibetan studies in Japan, and is respected as an ethnologist and explorer.

Kawaguchi is also notable for his enthusiasm for Buddhist monasticism at a time when Japan was modernizing and Japanese society was undergoing numerous changes. A Christian by birth, he ordained as a Buddhist monk at the age of 25 at Gohyaku Rakan-ji in Tokyo, having read about the life of the Buddha at the age of 15. A strict observer of the monastic vows of vegetarianism, chastity, and temperance, Kawaguchi became the rector of the temple, but gave up the position in 1891 to live in seclusion in Kyoto, where he meditated, learned Pali, and translated classical Chinese texts of the Tipitaka into Japanese. Recognizing the need to refer to the original manuscripts for more accurate translation, he decided to leave Japan for Tibet in 1897.

“The story of Ekai’s journey to escape Tibet and getting through checkpoints one after another that was told in his travel book was confirmed by his diary,” said Prof. Naoji Okuyama of Koyasan University, who specializes in the cultural history of Tibetan Buddhism and is the author of the critical biography Hyoden Kawaguchi Ekai. “The diaries are precious materials that convey Ekai’s courage, ability to take action, and meticulousness.” (The Asahi Shimbun) Ekai Kawaguchi's diary was discovered at the home of his 90-year-old niece in Tokyo. Photo by Junji Murakami. From asahi.com

The recently recovered diary dates from 1 January–17 August 1902, and comprises 17 B4- and B5-size pages. The text is written mainly in kanji and katakana using a pen, believed to have been made from sharpened bamboo or wood, and sumi, a soot-based solid Chinese ink mixed with water. Kawaguchi’s two earlier diaries, found in 2004 and 2005, also describe his travels in Tibet, dating up to 1901.

The journal includes Kawaguchi’s account of his escape from Lhasa, the traditional capital of Tibet, and his subsequent 400-kilometer journey to Darjeeling in India. The diary also contains details of his life in Lhasa, which were largely left out of Tibet Ryokoki. Journal entries read: “Every day, I go to the Meru temple and listen to lectures. March 18.” “I read a book about the history of Tibetan Buddhism. March 30.” (The Asahi Shimbun)

Kawaguchi posed as a Chinese monk while in Tibet, where he spent s period living and studying at Sera Monastery in Lhasa. Kawaguchi’s mainly devoted his time in Tibet to Buddhist pilgrimage and study, although he also gained a reputation as a doctor of Chinese and Western medicine, which led to him have an audience with the 13th Dalai Lama Thubten Gyatso (1876–1933). Following a tip from high-ranking friends that his cover had been blown, Kawaguchi fled the Tibet for India, although several of the people who had sheltered him in Tibet were later imprisoned and tortured by the authorities. 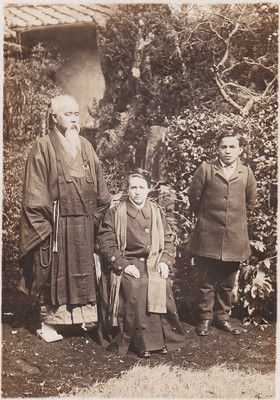 Ekai Kawaguchi, left, with Alexandra
David-Neel and her traveling companion
Aphur Yongden in Japan in July 1917. From
gis-reseau-asie.org

Kawaguchi was also acquainted with the Belgian-French explorer, spiritualist, anarchist, and writer Alexandra David-Neel, sometimes described as “the first Buddhist in France,” and “the first Western woman to reach Lhasa.”* On 15 April 1912, David-Neel encountered Kawaguchi in the waiting room of the 13th Dalai Lama, who spent three years living in exile in Kalimpong, northern India from 1910–13. She would meet Kawaguchi once again on a visit to Japan in 1917.

Kawaguchi’s three known journals of his travels, along with a dictionary that he often used, are set to go on display from 26 October–4 December at an exhibition titled Ekai and Sakai at the Sakai City Museum and other venues.

* Who was Alexandra David-Neel? A Brief Story of a Buddhist Anarchist (Buddhistdoor Global)