New York City’s Metropolitan Museum of Art (The Met) has announced that it has received an “extraordinarily rare” Nepalese ritual crown dated to the late 13th to 14th century, during Nepal’s early Malla period (c.1201–1769). The item, donated by Chicago-based art collector Barbara Levy Kipper, has been placed on display in The Met’s main building on New York’s Fifth Avenue. 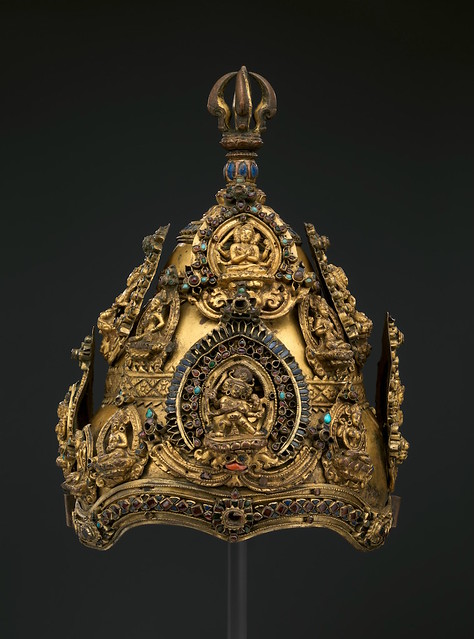 This ritual crown, made from gilt-copper alloy inlaid with semiprecious
stones, has been dated to Nepal's early Malla period. Fromalaintruong.com​

Elaborately crafted from gilt copper, the conically shaped crown is a rare example of the type of ritual headwear unique to Vajrayana Buddhism as practiced by the Newar people of Nepal, the historical inhabitants of the Kathmandu Valley and its surrounding areas. The crown would have been worn by hereditary Nepalese priests—or vajracharya—of the Vajrayana tradition during religious ceremonies. Vajracharya, meaning vajra (thunderbolt) carrier, were spiritual teachers born into the highest caste of Nepal’s Newar community. Only the sons of vajracharya were recognized as vajra-masters, entitling them to perform priestly functions on behalf of others.

“Thanks to the generosity of Barbara Levy Kipper and her late husband David, this exceptionally early Esoteric Buddhist ritual object is now a centerpiece of The Met’s holdings of Nepalese art,” said Thomas Campbell, director and CEO of the museum. “The crown will greatly enrich our display of South Asian art.” (The Metropolitan Museum of Art) 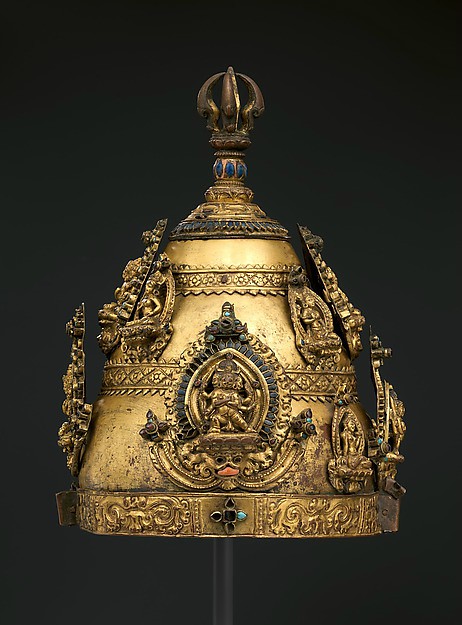 Rear view of the crown. From alaintruong.com

The Met described the crown as “exceptional in its complexity: it is dominated by a series of diadem plaques depicting emanations of the Bodhisattva of Transcendent Wisdom, Manjushri, in his esoteric form as Manjuvajra. Four wrathful and four benign medallions of Manjuvajra adorn the crown, supported by smaller plaques depicting goddesses presenting garlands and other offerings. All are repousséd in copper alloy and mercury gilded. The framing enclosures of each figural medallion are inset with assorted precious and semi-precious gemstones, turquoise, rock crystal, coral, and glass.” (The Metropolitan Museum of Art)

“This gift from the Kippers demonstrates a very high standard of copper repoussé artistry, in which the Newari metalworkers excelled,” said the museum’s Florence and Herbert Irving Curator of the Arts of South and Southeast Asia, John Guy. “Very few elaborate ritual crowns of such early date and in such remarkable condition have survived to this day.” (The Metropolitan Museum of Art)

Immediately above the diadem, the three-faced wrathful emanation of Manjuvajra is depicted standing in an aggressive posture, with two arms crossed at his chest to symbolize union with his consort. His other arms grasp a flaming sword, and a katvanga, or ritual wand, among other items. In total, the crown bears eight representations of Manjuvajra, wrathful and transcendent, and is surmounted by a five-pronged vajra. 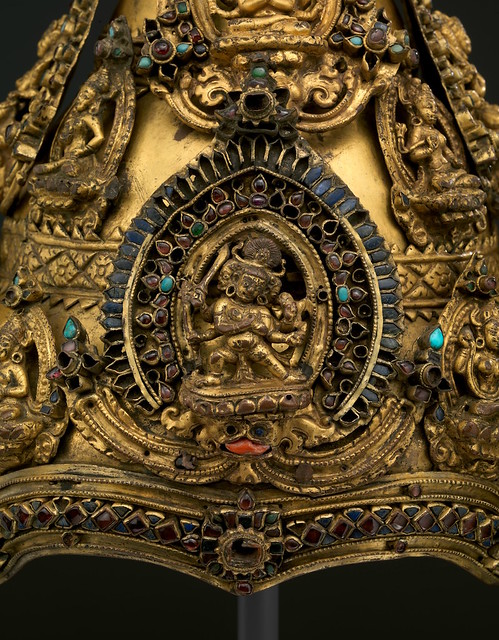 A closeup of the front depiction of the bodhisattva Manjuvajra . From
alaintruong.com

“I am pleased that the crown is now reunited at The Met with other significant objects that were once part of the Zimmerman Family Collection,” said Kipper, former chairperson of book distributor the Chas Levy Company. (The Metropolitan Museum of Art)

Founded in 1870 and officially opened in 1872, the Metropolitan Museum of Art is the largest art museum in the United States and among the most visited in the world, with a permanent collection of more than 2 million works divided among 17 curatorial departments.