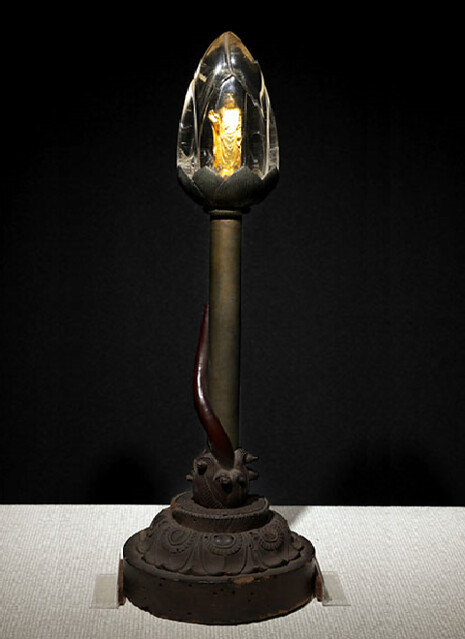 A small wooden statue of Amitabha Buddha (Jpn: Amida Butsu, Amida Nyorai) encased in crystal is on display at Daigo-ji, a temple in the Japanese city of Kyoto. The unusual statue, known as “Suisho hogan iri mokuzo Amida Nyorai zo,” was discovered in a wooden box at Daigo-ji in 2002, and experts surmise that it may have come from the studio of master Buddhist sculptor Kaikei around the end of the 12th century.

The statue, a standing Amitabha with lapis-lazuli-colored hair, measures just 5.5 centimeters in height and is ensconced inside a 10-centimeter-high lotus-bud-shaped crystal, which in turn is set in a decorative base carved to resemble petals. The crystal is cut in a specific shape to create an optical illusion; when the crystal reflects the light that is shone on it, the statue inside appears smaller than it actually is.

According to Hiromichi Soejima, professor emeritus of the history of Japanese sculpture at Taisho University, who examined the statue, the crystal enclosure was an original feature of the work, rejecting the idea that it might have been added at a later date. “It would seem that the statue was placed in the crystal from the outset of production,” said Prof. Soejima, who was amazed at the preservation of the sculpture and the colors. "It may have been considered a Buddhist statue usually kept hidden from the public.” (The Asahi Shimbun)

Prof. Soejima also noted that the style of the statue’s garments bears a resemblance to garments found on other Amitabha statues created by Kaikei. 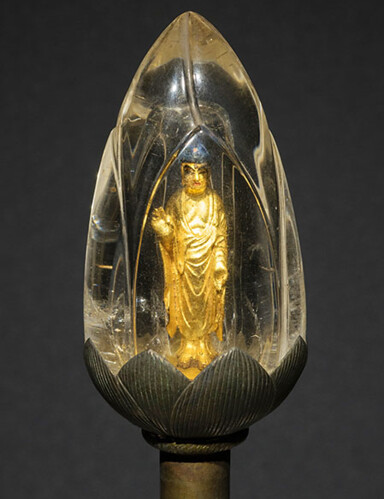 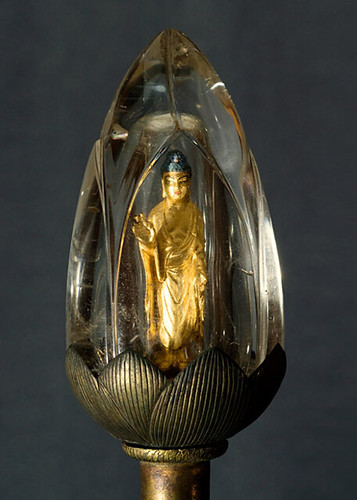 Light fractured by the crystal changes the appearance and size of the statue within. From asahi.com

After examining the statue, Kensuke Nedachi, professor of the history of Japanese sculpture at Kyoto University, stressed the uniqueness of the item. “I’ve never seen a Buddha statue inside a crystal. I assume that an individual kept it for worship,” he said. He, however, hesitated to draw conclusions about its origin: “The statue is believed to have been produced at the beginning of the Kamakura period. Although it has the flavor of works of art by Kaikei, it lacks graciousness. Further study is needed.” (The Asahi Shimbun)

Kaikei, a Japanese Busshi or Buddhist sculptor, lived during the tumultuous start if the Kamakura period (1185–1333), when political power in the country shifted from aristocratic rule in the west of Japan (Kyoto, Nara) to the shogunate in Kamakura in the east. The Kamakura period is also notable for the flourishing of Buddhism across the country—in particular Zen Buddhism and the Jōdo-shū branch of Pure Land Buddhism. This politically and socially turbulent period was also a high point in the history of Japanese sculpture, as artists began incorporating stylistic and technical innovations that resulted in a level of realism not previously seen. Sculptors of the era also began signing their work, enabling the evolution of styles by individuals and workshops to be traced and documented. Sculptors in the 18th century could trace their artistic lineages back to early Kamakura masters.

Kaikei was part of the Kei-ha school, which was founded by his teacher Kōkei and became the dominant sculptural school until the 14th century. It specialized in sculpting statues of the Buddha and other important Buddhist figures. The most famous Busshi from the Kei-ha school was Kaikei’s contemporary and Kōkei son Unkei.

Kaikei’s sculptural style is known to be pictorial, delicate, and intelligent, and is also referred to as Anna-miyō (Anna style). Amitabha statues were Kaikei’s specialty, especially in his final years when he crafted many smaller depictions.

The crystal encased statue will be on display at Reihokan Museum on the grounds of Daigo-ji until 10 December.

Origins of the Godai Myо̄о̄
Senso-ji: A Buddhist Temple for the People
The Many Forms of Avalokiteshvara