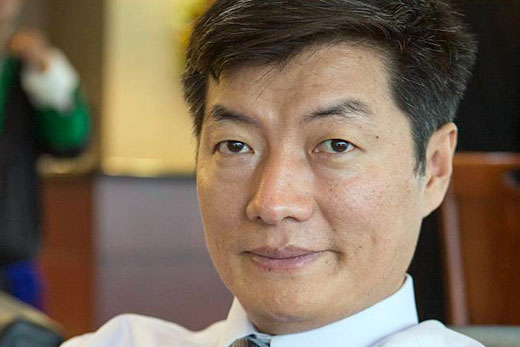 SEATTLE — Emory University, in Atlanta, United States, has announced that Sikyong Lobsang Sangay, president of Tibet’s government-in-exile, will offer the 2018 Berman Lecture at the University, on Monday, 9 April, 7 p.m. The topic of the lecture will be "The Tibetan People’s Transition to Secular Democracy." The Berman Lecture is named for Harold J. Berman, “whose scholarship on the link between religious tradition and law evolved into what is now a thriving law and religion field.” (Emory)

Sangay was elected as the administrative head of the Tibetan government-in-exile, or Central Tibetan Administration (CTA), in 2011, after the Dalai Lama declared his wish to step down from his political role in the organization. Sangay is the first democratically elected leader of the Tibetan people.

He supports the “middle way approach” to peace in Tibet, which represents the Dalai Lama’s vision of autonomy for Tibet within the framework of the Chinese constitution, similar to arrangements China has with Hong Kong and Macau. (Emory)

In 2013, giving the first annual lecture of the Indian Association of Foreign Affairs Correspondence, Sangay urged the media to give greater attention to non-violent methods of resistance, stating: “If non-violence is the right thing to do, we ought to be supported by the international community. Paradoxically, what you read about in the newspapers or watch on television in recent times, for example, in Syria, is the 'freedom fighters' of Syrian democracy. The media projects them as freedom fighters and heroes and they get all the support. Tibetans have been democratic and non-violent for the last so many decades, how come we don't receive similar support and attention?” (Times of India) Born in the Tibetan community in India, Sangay graduated from Delhi University and was the first Tibetan to earn an S.J.D. degree from Harvard Law School. He went on to become a senior fellow at the East Asian Legal Studies Program at Harvard. His expertise is on international human rights law.

“We are so very honored to have President Dr. Sangay speak to us on the Tibetan people’s experience of the transition to secular democracy,” says Silas W. Allard, associate director of Emory’s Center for the Study of Law and Religion (CSLR), sponsor of the event.

“The Tibetan people have a living memory of moving from a centuries old combination of political and religious authority in the person of the Dalai Lama to an elected, secular government-in-exile,” Allard says. “This creation of a secular government and the work to preserve a religious tradition in an exilic community offer important new perspectives on enduring questions about the interaction of law and religion.” (Emory)

The Berman lecture is free and open to the public and will be held in the in Tull Auditorium at Emory University School of Law.