The US volunteer-based Buddhist organization One Earth Sangha, which describes its mission as “expressing a Buddhist response to climate change and other threats to our one home,” has issued a statement of support urging solidarity with Dakota Access Pipeline (DAP) protesters at the Standing Rock reservation in the US states of North and South Dakota. (One Earth Sangha)

“In order to preserve life and sacred land and water on Mother Earth, we practitioners, students, and teachers of the Buddhist tradition stand with the peaceful people of Standing Rock Sioux Reservation and with hundreds of other indigenous nations and allies in protest of construction of the Dakota Access Pipeline,” One Earth Sangha said in its statement released at the end of October. “We call on the Army Corps of Engineers and other US government agencies to adhere to regulations protecting the Standing Rock Sioux people, sacred land, and clean water, and to practice truthful and loving speech and action that heals past grievances as well as earning trust. Arrest and prosecution of peaceful protesters must end immediately. Construction of the Dakota Access Pipeline and any efforts toward running a pipeline beneath the Missouri River must be halted until proper environmental assessments are made and risks to the Standing Rock Sioux and other affected groups are prevented.”

The planned 1,885-km, US$3.8 billion DAP, a project operated by a group of companies led by Energy Transfer Partners, would skirt the Standing Rock Indian Reservation by about a half mile. However representatives of the Standing Rock Sioux Tribe and environmental activists say the pipeline threatens water resources as well as sacred Native American sites. Advocates of the pipeline, which, if completed, will carry 570,000 barrels of crude oil per day, say the project represents the most direct route for bringing shale oil to refineries on the US Gulf Coast, passing through Iowa, Illinois, and North and South Dakotas. 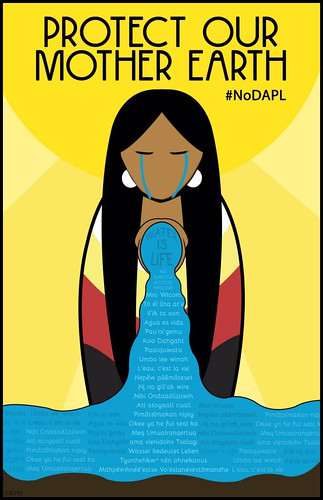 The One Earth Sangha statement cites David Archambault II, chairman of the Standing Rock Sioux Tribe, as saying, “We are a resilient people who have survived unspeakable hardships in the past, so we know what is at stake now. As our songs and prayers echo across the prairie, we need the public to see that in standing up for our rights, we do so on behalf of the millions of Americans who will be affected by this pipeline.”

Standing Rock, a Hunkpapa Lakota and Yanktonai Dakota reservation, is the sixth-largest Native American reservation in the US, with a land area of 9,251.2 square kilometers and a population of some 8,250. Although the federal government halted construction of the pipeline in September, the protests have been marred by tense standoffs and violent clashes between protestors and law enforcement personnel as well as private security contractors hired by the pipeline construction company. More than 400 protestors have been arrested since 10 August. Human rights advocacy group Amnesty International USA announced on Monday that it would send a delegation of observers to the protest site to monitor the activities of law enforcement personnel deployed in the area.

Meanwhile, Native American leaders have vowed to continue their protest through the oncoming winter, with plans being drawn up to provide food, heat, and shelter to enable the protesters to remain onsite during the cold months ahead, when temperatures could fall below –37ºC. “Whether we like it or not the simple truth is that Indians have to become leaders beyond their own communities,” Rebecca Adamson of the Eastern Cherokee Deer Clan is quoted as saying in the One Earth Sangha statement. “What we see in today’s Western societies is fear-based—a scarcity of resources and individuals with insatiable appetites. When you look at an indigenous economy that’s survived for tens of thousands of years you see [an assumption] of prosperity and a kinship-based sense of enoughness.”